Does Adderall Abuse Cause Hair Loss?

A very rare side effect associated with Adderall abuse is hair loss. It can occur due to numerous complications related to abusing the drug.

Adderall  (dextroamphetamine and amphetamine) is approved for the treatment of attention deficit hyperactivity disorder (ADHD), and it is also used to treat the sleep disorder narcolepsy.

The medication contains two potent central nervous system stimulant drugs. It should only be used while under the supervision of a physician and according to its prescribed purposes.

Adderall has been noted to be a significant drug of abuse, especially among younger individuals. It is estimated that about 20 percent of college students have abused Adderall or some other stimulant that is designed to treat ADHD.

Some of the more common side effects that occur with medicinal use of Adderall include:

Side Effects of Adderall

In most cases, people who develop these side effects when using Adderall find that they dissipate over time. Physicians can adjust the dose of Adderall or treat the side effects with other medications.

Alopecia, or hair loss, is listed as a rare side effect of Adderall use by the U.S.  Food and Drug Administration (FDA). It occurs in far less than one percent of people who take Adderall medicinally. 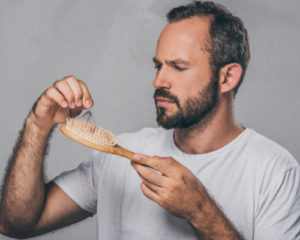 More serious side effects like the development of motor tics, cardiovascular problems like high blood pressure, neurological issues like seizures, and even psychosis can occur in people using Adderall to treat ADHD or narcolepsy.

When these side effects occur, the drug is often discontinued.

These serious and rare side effects do occur in people prescribed Adderall, but they are more likely to appear in those who abuse the drug.

Those who abuse drugs will typically use a far higher amount of the drug than medicinal users take. They may also use it more often or binge on it. If you abuse Adderall, you are far more likely to experience untoward side effects than someone who is taking the drug for ADHD or some other medical problem.

There is no reliable documentation of the prevalence of side effects in people who abuse most drugs because they typically do not report their issues with drug abuse to authorities. However, you can rest assured that those who abuse Adderall experience a higher rate of potential side effects than people who use the drug according to its prescribed instructions.

Hair Loss Due To A Combination Of Other Side Effects

It is usual for people to lose some hair every day. There are many different medications that list hair loss as a potential side effect.

If you experience significant hair loss associated with the abuse of Adderall, it will most likely be due to a combination of effects.

Reasons for Hair Loss From Adderall

Hair loss associated with Adderall abuse is far more likely due to these reasons rather than the direct effects of Adderall.

If you are abusing Adderall, which means you are taking the drug without a prescription, you can reverse any hair loss associated with the abuse by getting help for your substance use disorder.

“You can also eat a balanced diet, get plenty of rest, and learn stress management techniques. Many of the reported cases of hair loss associated with Adderall abuse appear to be reversible, at least to some extent. ”

There is one published case report of a 12-year-old girl who was believed to develop the disorder trichotillomania as a result of Adderall use. Trichotillomania is a very rare psychiatric disorder where individuals compulsively pull out their hair.

In this case, the behavior was induced by Adderall; therefore, the person would not be formally diagnosed with trichotillomania. Instead, she was displaying a substance-induced psychiatric disorder. According to the report, once she was taken off Adderall, her hair-pulling behavior abated, and her hair eventually grew back.

The chances that you will develop any form of trichotillomania from abusing Adderall is minuscule; however, this documented case does suggest that it may happen to some individuals in scarce instances.