Doctors and Addiction: How to Find Help as a Medical Professional

Doctors and other medical professionals have high-stress jobs that demand a lot from them. With the recent COVID-19 pandemic, doctors and nurses have found themselves on the frontline of a difficult challenge that is wearing many people thin. Stress is a significant catalyst for substance use problems and mental health issues. But admitting to an addiction can be daunting for a physician. How can a doctor find help with a substance use disorder? Learn more about why doctors might use drugs and what they can do to find treatment.

No one sets out to develop a substance use disorder, and addiction is usually a consequence of drug misuse that is never intended to escalate. But doctors know better, right? Doctors and other medical professionals may work hard to promote health in their patients without focusing on their own health.

Studies in the 1980s and 1990s examined the prevalence of tobacco smoking among doctors and nurses. At the time, smoking was a popular and common vice. There were still smoking sections of hotels and restaurants. Still, it was widely known that cigarette smoke is toxic and full of carcinogens. But a report in 1986 found that more than 16% of doctors and more than 23% of nurses smoked.

Today, smoking is on the decline, but other drugs are more common. Many physicians come into contact with potentially addictive substances on a regular basis. Prescription opioids and depressants are commonly misused as recreational substances in the general population.

Most doctors don’t seek recreational highs, but prescription drugs are highly available to doctors. A small survey of 55 doctors in 2014 found that more than 69% reported misusing prescription drugs. The study was small, and most of these doctors were men, who are statistically more likely to misuse drugs than women, but the number seems high for people that have the medical knowledge to know the risks. 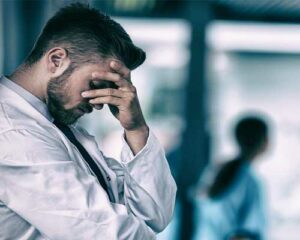 While it may seem obvious that doctors, of all people, should know the risks of substance misuse and addiction. So, why would they start using a drug when they know it can cause addiction or other consequences? Most people are aware that drinking too much or taking drugs beyond the recommendations of a doctor is potentially dangerous.

But knowledge of the risk of drugs sometimes isn’t enough to stop you from doing them. Most people fall into substance use problems gradually and think they’re under control the whole time. The nature of addiction is that it hijacks a part of your brain and causes you to rely on your drug of choice. Doctors share some of the same reasons for drinking and drug use that the average person does, but they also have some unique risk factors.

Doctors Use Drugs to Cope with Stress

As professionals in high-stress work environments, doctors may be at a greater risk of turning to drugs to cope with stress-related issues. Alcohol and other drugs can offer temporary relief from stress and anxiety. Alcohol can offer a brief mood lift and a period of relaxation. Like many people in stressful professions, medical professionals may start drinking socially as a way to blow off steam. Drinking with colleagues or friends is a common after-work activity. But drinking as a way to cope with stress can turn into a form of self-medication.

For the average person, self-mediation is the use of a substance to deal with a mental or physical problem without consulting a doctor. For a doctor, it can mean subconsciously using a substance to cope with stress without thinking about it as a form of medication. However, using alcohol or other substances that way can quickly turn into dependence and addiction.

Addiction interferes with the reward center of the brain, which is designed to encourage health activities by working with certain “feel-good chemicals” in the brain. Drugs and alcohol can interact with many of the same chemicals that work with your reward center. As you develop a substance use disorder, your brain will learn to cope with stress and other negative emotions by encouraging the use of drugs or alcohol.

Social drinking and drug use can turn into problem substance abuse quickly. It’s usually characterized by using alone, using or drinking at odd hours, a growing tolerance, and needing to use drugs just to feel normal.

Doctors Use Drugs to Treat Themselves

While doctors have high-stress jobs, they also have greater access to prescription drugs. Most doctors aren’t looking to get high for fun, but they may use prescription drugs to treat stress, anxiety, sleep problems, and pain. Long hours and stress can contribute to mental health problems like anxiety and depression. But stress can also cause physical aches and pains that make it difficult to do your job effectively. There are common medications used to treat depression, anxiety, sleep problems, and pain. Many of them are addictive.

Drugs like benzodiazepines are used to treat anxiety and sleep disorders, but using them for too long can cause you to develop a chemical dependence or addiction to them. Opioids are used to treat pain. Many people encounter them after being treated for an injury or after surgery. They can even be prescribed after a routine dental procedure. Using an opioid for too long, even as directed, can lead to a substance use disorder.

Many people, including doctors, begin using an addictive prescription drug as part of legitimate medical treatment. But doctors may have increased access to these prescriptions. Once dependence or addiction develops, doctors may be able to maintain a pill addiction for longer. When prescriptions become too expensive, and your substance use disorder becomes severe, many people turn to illicit sources.

Doctors May Use to Increase Their Performance at Work

Medical professionals that work long hours at high-stress jobs may turn to drugs to help them perform better at work. Stimulant substances like amphetamines are used to treat ADHD. But some people use them to increase their alertness, focus, and wakefulness.

Amphetamine misuse is common among college students that want to enhance their ability to study for long hours and absorb information. Doctors may use amphetamines or other stimulants as a way to get through long shifts, remain alert, and focus on helping their patients. However, stimulant misuse can also cause heart problems, dependence, and sleep disorders.

Doctors with substance use problems or mental health issues are often afraid to reach out for help. Like many people, admitting a problem can seem like a huge risk. But doctors may have increased cause for concern. If they are perceived as unable to do their job, there could be serious consequences in their careers. But addiction is a progressive disease. You may believe that you have it under control, but addiction is difficult to control by nature. If left unaddressed, substance use disorders can damage your career and other parts of your life.

Like most diseases, early intervention may be the key to avoiding serious consequences of substance use problems. If, as a doctor, you believed you had a chronic disease like diabetes, you would seek to treat it as soon as possible. Like diabetes, addiction is chronic, and it can get worse if it’s ignored.

Doctors can start addressing substance use problems by speaking to a colleague or talking to their own physician. If you have a chemical dependence on a drug, you may need to go through a tapering period. Depressants can be dangerous during withdrawal, and opioid withdrawal is notoriously challenging to detox from on your own. You may need to go through a detox program to achieve sobriety safely and effectively.

Addiction is a complex disease that can take time to learn to cope with effectively. A moderate-to-severe substance use disorder may require addiction treatment beyond a week in treatment to address. According to the National Institute on Drug Abuse (NIDA), effective treatment lasts for at least 90 days or more. Through this process, you may go through several levels of care, depending on your needs.