What Are the Short & Long-Term Effects of Diphenhydramine Use?

In the United States, allergies are common for all age groups, and they are the sixth leading cause of chronic illness in the country with an annual cost of more than $18 billion. More than 50 million Americans struggle with allergies each year. Allergic rhinitis, which is often called hay fever, is a common condition that causes someone to sneeze, have a stuffy nose, runny nose, watery eyes, itching of the nose, eyes, or roof of the mouth.

These allergies can be seasonal or perennial, and seasonal rhinitis that occurs in spring or fall can be caused by pollen, grass, weeds, or airborne mold spores. Those who experience the symptoms year-round are triggered by dust mites, animal dander, cockroaches, or mold spores.

It has been used for several decades at this point and provided relief for millions of its users. It was one of the most revolutionary medications to come out and treat something that can cause such a nuisance in someone’s life. Diphenhydramine, when used as prescribed, is a useful medication.

In 1940, George Rieveschl accepted a position in the Department of Chemical Engineering at the University of Cincinnati, and he embarked upon several research experiments. Though his initial focus upon taking the job was to relieve muscle spasms, the more time and effort he put into his research netted something different. He discovered diphenhydramine (Benadryl), a breakthrough for allergy sufferers.

The drug was initially approved in 1946 and was available only by prescription. The Parke, Davis & Company held the patent for Benadryl, which expired in 1964. It wasn’t until the 1980s where diphenhydramine (Benadryl) was approved by the U.S. Food and Drug Administration (FDA) for over-the-counter use.

Over-the-counter medications can be sold directly to consumers without a prescription, and OTC medicines can be used to treat various ailments. Unfortunately, some medications such as diphenhydramine can be abused, such as when the user takes higher-than-recommended doses. Misusing these medications can result in short-term and long-term effects that can have lasting results.

Misusing an OTC medication is characterized as taking the drug in a way or dose other than directed on the package, taking medicine for its effects, or mixing the medications to create new products, which is a dangerous practice. You should always follow the instructions on the box and use as directed.

Diphenhydramine has a broad reach when it comes to uses, but it is an antihistamine most commonly used to treat allergy symptoms. Other uses for the drug, however, can reduce dizziness, nausea, and vomiting caused by motion sickness. In some cases, it is also used as a sleep aid, and it also has been used to treat tremors and muscle stiffness in those diagnosed with Parkinson’s disease. Unfortunately, as all drugs do, diphenhydramine can cause side effects, both short-term and long-term, if abused.

Short-Term Side Effects of Diphenhydramine Abuse

One study highlights that excessive use of an anticholinergic drug like diphenhydramine has caused an increased risk of developing dementia in some patients. However, before reaching that level of concern, diphenhydramine is linked to short-term memory loss.

Anticholinergic medications affect the central nervous system (CNS) and can cause one to become dangerously sleepy. When used continuously over three to four days, diphenhydramine can lower the brain’s choline levels, which cause memory impairment.

Other Adverse Effects Attributed to the Use of Diphenhydramine Include:

Long-Term Side Effects of Diphenhydramine Abuse

Continued diphenhydramine use can cause long-term adverse side effects that result in permanent damage. Not only will prolonged use cause harm, but it can lead to other aspects such as dependence on the medication.

Common long-term side effects of prolonged diphenhydramine use include:

Diphenhydramine Use and Dementia 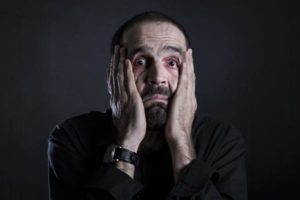 While there is no direct correlation to diphenhydramine causing dementia, there have been studies released that highlight its ability to increase the chances of developing dementia. A team led by Shelly Gray, a pharmacist at the University of Washington’s School of Pharmacy, tracked nearly 3,500 men and women age 65 and older. These individuals took part in Adult Changes in Thought (ACT), a long-term study conducted by the University of Washington and Group Health. They utilized pharmacy records to determine which drugs, both prescription and over-the-counter, that each participant indulged in during the past 10 years. Their health was also tracked for an average of seven years.

During this span, 800 of the volunteers developed dementia. When the research was broken down, researchers examined the use of anticholinergic drugs and found that those who used medications like diphenhydramine were at an increased risk of developing dementia than those who did not use the drugs. Taking one of these anticholinergic drugs for the equivalent of three years was associated with a 54 percent higher dementia risk than the individuals who took it for three months or less.

While diphenhydramine may seem like a harmless medication because of its easy, over-the-counter access, long-term use of any substance can prove to be fatal or have life-threatening consequences. If you or someone you know is consuming large doses of diphenhydramine, it may be a sign to seek treatment.