What Are the Side Effects of Abusing Halcion?

Abuse of a benzodiazepine like Halcion can lead to many potential side effects, including rebound effects, long-term problems with cognition, significant tolerance to benzodiazepines, intense withdrawal symptoms when use is stopped, and addiction.

Benzodiazepines have important uses in medicine, particularly in controlling clinically severe anxiety, seizures, and insomnia. They also are useful as anesthetics or pre-anesthetic medications.

Halcion (triazolam) is a fast-acting and short-lasting benzodiazepine that is most commonly used in the treatment of insomnia. It can be used for other purposes, but due to its very rapid effects and short half-life, it is most effective in this capacity.

Benzodiazepines are often not primary drugs of abuse. They are more commonly abused in conjunction with other drugs, like alcohol, prescription painkillers, and other substances.

Even a short-acting benzodiazepine like Halcion will produce significant tolerance in anyone who uses it for more than a few weeks.

People who take large amounts of Halcion and use it frequently will find they do not get the effects they seek after a very short period of use. They will need to use increasing amounts of the drug to get the desired results.

This accelerates the cycle of abuse and increases the potential for further problematic side effects associated with Halcion abuse.

In addition to the rapid development of tolerance, there are other side effects that can occur with Halcion abuse.

Rebound effects typically occur in individuals who use specific types of medications for long periods of time.

These conditions can produce many side effects, including an increased susceptibility to respiratory infections, damage to various parts of the brain due to reduced blood flow, and damage to other organ systems due to the reduced blood flow and decreased oxygen delivery.

Halcion is listed as a controlled substance. It is identified as having moderate potential to produce physical dependence even in people who take it for medical reasons.

Individuals who abuse the drug will often use greater amounts of it and use it more frequently than those who use it to control insomnia or for some other medical reason. This can result in accelerated development of physical dependence.

The symptoms of physical dependence associated with abusing the drug can be even more severe than the effects related to its medical use.

Moreover, people who chronically combine Halcion with other substances like alcohol run the risk of developing very complicated issues with withdrawal.

Exacerbation of Other Side Effects

Halcion, like all drugs, has a side effect profile. Side effects may occur in some people who take the drug for medicinal reasons, though those who abuse the drug are more likely to experience side effects and with more intensity.

These side effects may include: 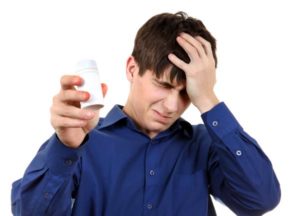 Parasomnias are abnormal behaviors that people perform while asleep, such as sleepwalking. These behaviors are typically performed while people are awake. They may include eating, driving, or cooking while asleep.

For people who use benzodiazepines like Halcion for medical reasons and according to their prescribed instructions, the risk to engage in a parasomnia is extremely rare.

However, people who abuse the drug may be at an increased risk to engage in these potentially dangerous behaviors.

The mechanism of action associated with benzodiazepine abuse interferes with the person’s ability to learn and remember new information. Individuals who take Halcion for medical reasons will sometimes have memory lapses while they are under the influence of the drug.

Individuals who abuse Halcion, particularly those who take it with other drugs of abuse, may experience severe issues with dense amnesia for major events that occurred while they were taking the drug.

There is research to suggest that individuals who abuse benzodiazepines are at a greater risk of developing different forms of dementia, including Alzheimer’s disease.

There is no guarantee that someone who chronically abuses Halcion will develop dementia. However, the risk that someone might is increased when they continue to abuse benzodiazepines for significant periods of time.

Benzodiazepines produce a suppression or depression of the functioning of the central nervous system. While this suppression leads to the medicinal effects of the drug, it also causes significant slowing of other bodily functions.

Abuse of benzodiazepines like Halcion can lead to a significant overdose risk, which can be fatal. This is because high amounts of the drug can shut down areas of the brain that control breathing and heart rate.

Halcion abuse, like abuse of any other substance, increases the risk for a person to be diagnosed with some other mental health disorder in addition to a substance abuse issue.

This is not to say that Halcion abuse causes a person to develop some other form of mental illness, or that having a pre-existing mental health disorder causes someone to abuse a drug like Halcion.

Instead, the relationship between a substance use disorder diagnosis and another form of mental illness is very complicated. Individuals who abuse substances like Halcion are very likely to be diagnosed with other psychological disorders.