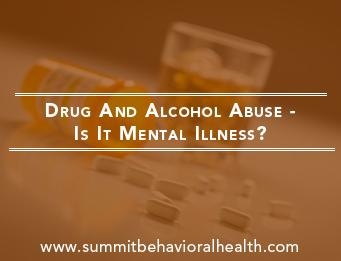 It took years for healthcare providers to consider alcohol a disease, and a similar battle is being waged over classifying alcohol and drug abuse as a mental illness.

Part of the reason is that it can take years for prevailing attitudes to change about an issue, especially when that issue as polarizing as drug and alcohol addiction.

But a growing body of research is revealing that because alcohol and drug abuse can negatively affect a person’s brain, it can create the same kind of changes that are found in mental illnesses.

APA Lists Alcohol and Drug Abuse as a Mental Disorder

In fact, the much-respected Diagnostic and Statistical Manual of Mental Disorders (DSM) published by the American Psychiatric Association (APA) includes a section for Substance-Related and Addictive Disorders.

Under this category, the AMA lists a number of alcohol and drug-related disorders as mental disorders, including:

In an excerpt from the report, the AMA report said that all drugs that are taken in excess have in common direct activation of the brain reward system, which is involved in the reinforcement of behaviors and the production of memories. (1)

Long-term drug and alcohol abuse have the effect of impairing the brain’s natural inhibitions, which deprives an addict of making good decisions.

And in fact, over time, the brain’s ability to issue warning signs to an addict is so compromised, that addicts may believe that continued abuse of drugs and alcohol is, in fact, beneficial, because of the way it makes them feel.

Therefore, it may not be implausible to suggest that long-term drug and alcohol abuse should be treated as a mental illness, given how much a person’s brain is altered through prolonged abuse.

The Link Between Alcohol and Mental Health

Long-term alcohol abuse not only lowers the brain’s inhibition but it also negatively affects the central nervous system, which controls a person’s moods and emotions.

Furthermore, intense alcohol consumption alters the brain’s chemistry and lowers the levels of serotonin, a chemical that creates feelings of intense pleasure. (2)

This is why alcoholics are often diagnosed with depression because they drink more to recapture the feelings of pleasure that drinking used to produce, but in doing so, they further decrease the serotonin the brain produces.

It’s a vicious cycle that many alcoholics cannot break because they keep chasing the ‘high’ that they once had when they first began drinking, but they can never reproduce that feeling.

Alcohol abuse also affects the brain’s memory centers, which is why alcoholics and binge-drinkers often suffer from what is known as ‘blackouts.’

In fact, long-term alcohol abuse has been linked to increased incidences of dementia. A recent study found that 10 to 24 percent of alcoholics were diagnosed with dementia.

The Link Between Drug Abuse and Mental Health

Similarly, drug abuse has similar negative effects on the brain as alcohol abuse.

For example, studies have found that drug abuse produces high levels of dopamine in the brain, which like serotonin, is a neurotransmitter that controls motivation, emotion, and feelings of pleasure.

Drug abuse triggers the brain to overproduce dopamine, which acts as a reward for the brain and drives addicts to use more drugs to replicate the pleasurable feelings.

But prolonged drug use kills the pleasure centers of the brain, and triggers depression and anxiety.

Furthermore, drug abuse can lead to compulsive behavior, because the brain’s ability to help an addict make sound decisions has been compromised.

And compulsive behavior is an aspect of certain types of mental illness, such as obsessive-compulsive disorder (OCD).

Three million people in the U.S. are diagnosed with OCD, which is characterized by repetitive behaviors sparked by anxious feelings or obsessions that may include contamination by dirt or germs, imagined harm to loved ones, runaway sexual urges, and devastating moral guilt. (3)

The point isn’t that drug abuse causes mental illness, it is that the consequences of abusing drugs for a long time damage the brain, and often lead to behaviors and symptoms that are found in some common types of mental illness.

Some addicts may only view their addiction as a medical issue, when in fact their struggle should be likened to a mental illness and treated in that way.

This is especially true when addicts are diagnosed with co-occurring disorders, which refers to a person who has an alcohol or drug abuse disorder and a mental health disorder.

Treatment and Recovery is Essential

As healthcare experts begin to view some types of drug and alcohol abuse as a mental illness, there will a greater push to educate the public about the effects these addictions have on the brain function of addicts. And with greater public awareness, the stigma of addiction may lessen, and the benefits of treatment programs may increase. If you or someone you love is struggling with drug or alcohol abuse, you have the right to know all the treatment options.

The medical detox experts at Serenity at Summit can provide you with all the information you need about treatment to make an informed decision. Please call us today.