Dilaudid and Oxycodone: What Are the Differences? (& Effectiveness)

Pain can be one of the most distressing complications that come with diseases, medical procedures, and injuries. Addressing pain is complicated, but there are a few treatment options, including physical therapy, non-opioid analgesics, and powerful opioid pain relievers. Opioids like Dilaudid and oxycodone are potent medications that can stop pain symptoms in their tracks. Few pain medications are as effective in treating pain when compared to opioids, but opioids can come with significant risks, including a high misuse potential, dependence, addiction, and overdose.

There are several opioid analgesics on the market in the United States. Strength and effectiveness vary across the many opioid options. Finding the right medications for your needs will mean working closely with your doctor. When it comes to taking any prescription, it is important to ask about risks and side effects, especially when opioids are involved.

Dilaudid is a brand name for a drug that’s been used in the United States for decades. The drug’s generic name is hydromorphone, and it was first patented in 1923. Three years later, it arrived on the mass market under the brand name Dilaudid. Hydromorphone is an opioid, a class of drugs that are typically used to treat moderate-to-severe pain symptoms. Today, they’re reserved for pain that would be difficult to manage with other options. Dilaudid was first introduced as a backup option for patients who did not get relief after taking morphine, another more common opioid at the time.

Hydromorphone is a semi-synthetic opioid, which means it’s made by chemically altering a natural opioid, which in this case is morphine. Like other opioids, hydromorphone works by binding to opioid receptors in the brain, spinal cord, muscle tissue, and organs. Opioids like hydromorphone block pain signals from being sent and received by the nerve cells throughout the body. The opioid receptors on your nerve cells are there to bind with endorphins, your body’s natural pain-managing opioid.

Endorphins are very chemically similar to morphine, which is why opioids can easily bind to these receptors. However, prescription opioids like Dilaudid are more powerful than your natural endorphins, leading to more intense effects.

Oxycodone is the generic name for a prescription opioid that’s an active ingredient in several opioid medications. Popular brand-name drugs that contain oxycodone include OxyContin and Percocet. OxyContin is oxycodone hydrochloride, and it’s used to treat moderate, severe, and chronic pain. Percocet contains both oxycodone and acetaminophen, which is the non-opioid analgesic used in over-the-counter drugs like Tylenol. Both are used for similar purposes, while Percocet may be favored in treating pain that’s related to inflammation. However, both of these oxycodone-containing drugs have been the subject of controversy.

OxyContin is owned by Purdue Pharma, which has received accusations and legal accountability for downplaying the risks associated with oxycodone use, such as dependence and addiction. Purdue and other pharmaceutical companies that sell opioids have been accused of contributing to the overprescription of opioids that has led to the opioid crisis.

Oxycodone, like other opioids, binds to opioid receptors in the body to facilitate relief for moderate-to-severe pain symptoms. It can be extremely effective in treating pain, but it also comes with the risk of chemical dependence and addiction, just like Dilaudid. Using opioids for too long can cause chemical dependency or more severe opioid use problems. Opioids like oxycodone also have a high misuse liability because they can cause a powerful sense of euphoria and physical relaxation. Opioid misuse increases your risk of addiction and potentially life-threatening overdoses.

Since these drugs are so similar, the one that’s more effective for your needs will depend on personal factors that you can discuss with your doctor. Both drugs have shown to be effective in treating pain symptoms, and they have similar side effects, onsets of action, and duration of actions.

In immediate-release forms, both hydromorphone and oxycodone have similar half-lives at around three hours. That means it will take your body a similar amount of time to process both drugs so that they may remain effective for around the same time for three to six hours. The two drugs even begin working after 10 to 30 minutes of taking an immediate-release dose. In some cases, if both drugs could be equally effective for your needs, the right drug will come down to other factors, such as which one is covered by your insurance or which drug your doctor has the most experience with.

You may even begin using one and switch to the other if you and your doctor find your treatment hasn’t been effective. As with any prescription medication, it’s important to work closely with medical professionals to find the right dose and medication for your needs. There is no one medication that works perfectly for everyone.

Dilaudid and oxycodone have similar strengths, and their doses in tablet form are only slightly different. The strength of an opioid can depend on several factors, including the route of administration, the formulation of the specific drug you take, and whether or not the drug is an extended or immediate-release dose. Dilaudid is an immediate-release medication, which means you receive the full dose all at the same time. It’s prescribed in an oral solution and in tablet form. The tablets can be taken in 2 mg (milligrams), 4 mg, and 8 mg doses.

Oxycodone is available in both immediate and extended-release drugs. OxyContin is an extended-release drug, which means it is formulated to release its dose slowly over time. This is ideal for people who need long-term relief from pain, like cancer patients that experience chronic pain.

Oxycodone is also available in an immediate release brand called Roxicodone, which is available in 5 mg, 15 mg, and 30 mg tablets. Dilaudid’s smaller effective dose suggests that it’s slightly stronger. However, extended-release formulations of either drug will contain higher doses. Tapering with extended-release opioids by crushing, breaking, or chewing them can cause the full dose to release all at once, which could cause potentially dangerous overdose symptoms. 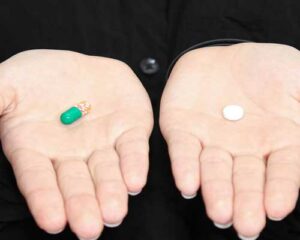 Yes, both Dilaudid and oxycodone can combine with other medications to have potentially dangerous effects. When you’re taking any opioid, it’s important to avoid any other opioid. If you take two opioids at the same time, even if they’re different drugs, it can increase your risk of serious side effects like respiratory depression.

Drinking alcohol while you’re on an opioid can have similar effects. Both substances have sedating effects that can slow your heart rate and breathing, and they can combine to potentiate each other, leading to a deadly overdose. Sleep aids may also interact with opioids. Unfortunately, people who struggle with pain symptoms may also struggle to get enough sleep. Doctors may prescribe benzodiazepines or other depressant sleep aids to people who are already taking opioids. It’s important to talk to your doctor about mixing sleeping medications and opioids since they work in the brain similarly to alcohol. Taking them together can cause potentially dangerous symptoms.

For the same reason, the Food and Drug Administration (FDA) warns that people with acute or severe bronchial asthma should not take Dilaudid or oxycodone when they’re outside of a monitored setting. Because asthma can also restrict breathing, a drug that causes respiratory depression can be dangerous.

The FDA also warns that people with gastrointestinal obstructions should not take either of the drugs. It’s very common for opioids to cause constipation. There are opioid receptors all over your body, even in your digestive system. Opioid receptors can bind to these raptors and slow down the muscles in your intestines that are responsible for moving waste to its proper destination. If you have a problem where your intestines are obstructed, opioids may make constipation issues worse, leading to potentially serious complications.