Is It Safe to Sleep on Heroin? (Potential Overdose Risks)

People are overdosing and dying from heroin now more than ever. Overdose deaths involving heroin rose from 1,960 in 1999 to 15,482 in 2017, according to the National Institute on Drug Abuse (NIDA).

What’s more, these deaths are occurring because people are being exposed to adulterated heroin, especially the kind that is mixed with powerful synthetic drugs. While fentanyl has surpassed heroin to become the top illicit opioid killer, heroin mixed with fentanyl is a large contributor to the recent spikes in overdose deaths.

Fentanyl, a synthetic opioid, is between 80 to 100 times stronger than heroin and is lethal for human beings at 2 mg (milligrams), which looks like a few grains of salt.

It is common for street dealers to mix heroin with fentanyl, which allows them to endow their drug with more potency while preserving the product.

By itself, heroin can be deadly. But only one in 10 overdoses results in death. This outcome is compounded when heroin is adulterated with fentanyl. In these times, users are more likely to be exposed to this particular concoction.

Whatever the case, when people die from heroin — pure or adulterated — it is because the drug causes them to forget to breathe. This is precisely why sleeping while on heroin is dangerous, particularly if the product has been artificially enhanced with another narcotic substance.

How Heroin Came To Be

Heroin’s lineage can be traced to the opium poppy, a plant that was cultivated in lower Mesopotamia (Southwest Asia). Reportedly, opium’s earliest use occurred around 3,400 B.C. Because this natural substance yielded such profound euphoria, it was often referred to as the “joy plant.”

News of opium’s intoxicant properties spread quickly, and it was transported to parts of Asia and China through the ancient trade route known as Silk Road. China and the British Empire went to war over opium twice in the 19th century.

The substance that would come to be known as morphine was isolated from the opium plant in 1804. It gained medical use due to its ability to reduce levels of physical stress and calm patients. Yet it would help birth a more potent substance that would ultimately be utilized for illicit purposes.

Eight times more potent than morphine, heroin was first synthesized by an English chemist in 1874. Heroin came into existence when morphine was treated with acetic anhydride.

In 1898, a German pharmaceutical company named Bayer trademarked and marketed heroin as a cough suppressant and over-the-counter (OTC) treatment for conditions like tuberculosis and pneumonia. It ceased production of the product in 1910 when the full extent of its addictive properties became known. Soon after, countries around the world set strict prohibitions on its use.

Nevertheless, as one of the most influential substances in human history, opium would spawn an entire family of drugs that would serve medical and illicit purposes, substances that have fueled the relentless opioid epidemic plaguing this country. Chief among those substances is heroin, the most notorious illicit opiate.

What Happens When You Use Heroin

When heroin enters your body, it binds and activates opioid brain receptors. When opioids like heroin act on receptors in this fashion, it triggers the release of dopamine, the feel-good brain chemical. Heroin stimulates the same areas of the brain that regulate emotions associated with sex and eating. Users report feeling an intense, pleasurable sensation or euphoria.

The reinforcement people receive from taking opioids such as heroin is what makes them physically and psychologically dependent.

In effect, heroin commandeers the brain.

This is precisely what happened to a man who struggled with opioid addiction to such a degree that he put himself through detox 20 times. Still, he continued to use. According to this NPR report, the man said all of his decisions began to serve his addiction. He admitted to lying to his family and stealing from his job, even as he tried to get sober.

After five days of sobriety, he started obsessively searching his credit cards for drug residue until he found a bag of heroin in his wallet.

“Somebody’s telling me I need to get high,” he told NPR.

And he satisfied his craving.

The Effects of Heroin and Overdose

When someone experiences a rush from heroin, it is usually accompanied by a warm flushing of the skin, heaviness in the extremities, and dry mouth. It is also not unusual for people to experience severe itching, nausea, and vomiting as well.

According to NIDA, heroin can cause users to experience perilous effects such as slowed heart function and breathing.

Other Long-Term Effects Associated with Heroin Use Include the Following:

When someone buys heroin off the street, it’s rare that they encounter a pure, unadulterated product. It is more likely that the drug has been cut with inert substances like cornstarch or powdered milk, toxic substances like rat poison, or illicit drugs like fentanyl or cocaine — or two or three of these substance types combined. 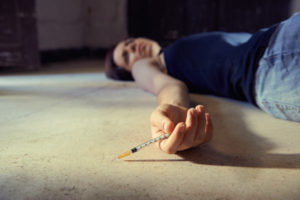 When someone overdoses, it is likely due to the additions of either toxic substances, other CNS depressants, or synthetic opioids. Any of those three types of substances, when included with heroin, often lead to death.

When heroin overdose occurs, breathing slows or stops completely, decreasing the levels of oxygen needed to reach the brain. This is what also causes coma and brain damage.

Death occurs, of course, when an overdose stops you from breathing altogether.

Why Sleeping While on Heroin Is Dangerous

As a central nervous system (CNS) depressant, heroin can cause users to feel drowsy for several hours. This state can lead to “nodding off” or alternating between states of sleep and wakefulness. This condition is also known as being “on the nod.”

Sleeping on heroin is dangerous because it is the first step toward excessive sedation — a slippery slope toward overdose, said Daniel Ciccarone, M.D., in a Live Science report.

Sleeping while on heroin is also dangerous when sedation is at a point where a user completely loses consciousness. When sedation is this profound, a user can go comatose and lapse into an overdose where breathing dramatically slows or stops completely, according to Ciccarone, who is also a heroin addiction expert.

Opioids do not produce life-threatening withdrawal symptoms. Rather, their ability to kill lies in their composition, particularly when they are mixed with toxic and psychoactive substances.

That’s why professional addiction treatment is essential. As with an alcohol, cocaine, or meth addiction, treatment for heroin can literally be the difference between living and dying.

If you fear that you or a loved one has succumbed to heroin addiction and need to be rescued, a professional recovery program will not only offer detox in the form of acute treatment, but it can also offer you comprehensive therapy and counseling through clinical stabilization services or partial care. Both programs can help you get to the root of your addiction and equip you with the strategies and education necessary to sustain sobriety and improve your life.

Simply put, professional treatment gives you the tools to have a fulfilling life as a sober person.

Once treatment is completed, you or a loved one can be connected to a recovery community such as the ones found in 12-step programs, which can provide the support necessary to avoid the pitfalls of relapse.

Heroin addiction does not have to be the end of your story. You can break free from its grip with professional addiction treatment.