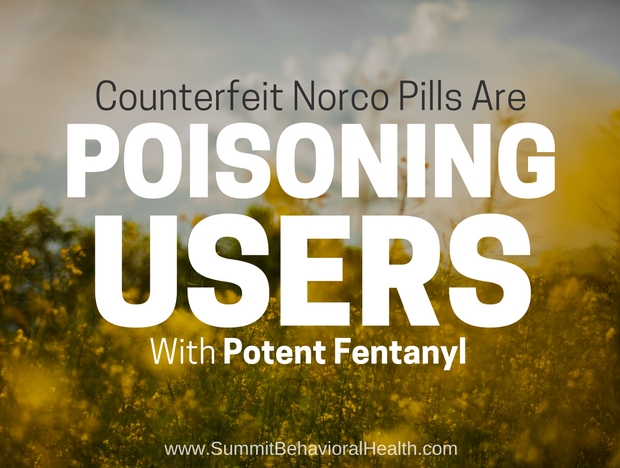 Norco is a prescription opioid pain reliever that contains hydrocodone and acetaminophen. Health care professional prescribe Norco for moderate-to-severe pain. Norco is one of many narcotics commonly misused and abused on the streets. Since March 23, 2016, more than a dozen people have died after taking pills they thought only contained Norco. Health department workers in Sacramento County, California, have since declared an emergency after identifying traces of fentanyl in the drugs.

Risks and Side Effects of Fentanyl

Fentanyl is an opiate drug that’s more powerful than heroin. Physicians have reason to believe that the Norco pills circulating the streets have recently been laced with fentanyl – creating a drug that’s an estimated 80 times as potent as morphine. Experts believe the drug is coming from Mexico in illegal shipments, leading to a rise in Norco-related overdoses throughout and outside of California.

Illicitly bought Norco pills with fentanyl are significantly stronger than normal Norco pills, leading to a high risk of life-threatening overdose. Users typically take one or two of the pills, expecting the standard effects of Norco.

Instead, Unsuspecting Users Suffer Severely Harmful Effects of Ingesting Too Much Fentanyl, Including:

Synthetic opioids like fentanyl may be contributing to the massive rise in overdose-related deaths in recent years. The distribution of Norco laced with fentanyl presents a serious health risk to users who buy the drug illegally on the streets. Fentanyl quickly enters the central nervous system with a high potency and typically is used only in a hospital setting. Fentanyl is not formulated for oral administration in pill form. Thus, a pill with fentanyl is an illicitly made product.

In California’s Bay Area, product specimens of Norco contain promethazine on top of fentanyl. Promethazine is prescribed to treat nausea, motion sickness, and vomiting. It can increase the high from opioids such as fentanyl and Norco and chronic opioid abusers commonly use it.

What Policymakers Are Doing to Get Norco off the Streets

The drastic increase in overdoses and deaths connected to illicitly purchased Norco is disturbing and has pushed policymakers to find a solution for getting this drug off the streets. This is a collaborative effort among law enforcement officials, medical professionals, and public health personnel to spread awareness about the dangerous fentanyl-laced Norco. Emergency departments and local poison control centers need to learn the side effects of a fentanyl overdose and how to treat it properly to an prevent overdose.

In 2015, a similar problem occurred when two people died from ingesting counterfeit Xanax laced with fentanyl. There are ongoing efforts to identify the exact source of the counterfeit drugs in California. Patients experiencing signs of a fentanyl overdose should seek medical help immediately and tell health care professionals where the counterfeit product was acquired. It’s now a physician’s job to inquire about the illicit purchase of the Norco pills containing fentanyl and to inform local poison centers and other health departments about the issue.

Finding the source of the counterfeit pills is the number one priority for California law officials right now. As an emerging threat to public health, the Centers for Disease Control and Prevention has issued a report that encourages the public to realize the hazards of purchasing prescription medications from anywhere other than a health care provider or reputable pharmacy.

Many overdose cases involving Norco aren’t illicit drug abusers, but ordinary pain patients who turned to the black market for medication when they could no longer get a prescription. The counterfeit Norco pills put these patients at risk of accidental overdose, some of which are fatal. Some policymakers blame the increase in people buying prescription narcotics illegally on strict regulations for prescribing painkillers. By passing off fentanyl as a legitimate narcotic, drug dealers are tapping into the growing black market of patients buying opioids after prescriptions for pain medication have run out.

Educating people about the risks of black market Norco pills is an important part of getting this narcotic off the streets. Patients who are cut off from opioids should seek help for withdrawal symptoms in local rehabilitation clinics and find a healthy way to reduce pain such as therapies and holistic medicine. If you or someone you know has been a victim of counterfeit Norco pills, contact your local authorities to anonymously report where you bought it.