Can You Overdose on Prozac? (Potential Dangerous)

Prozac is a popular prescription medication that’s used to treat depression and other mental health issues. Substance use disorders are also prevalent in the United States. Is there a danger of becoming addicted to Prozac? And is it possible to overdose on the antidepressant? With any prescription medication, it’s important to know the potential side effects and risks. Learn more about Prozac and what happens if you take too much of the drug.

Prozac is a brand name for a drug called fluoxetine that’s used as an antidepressant in the treatment of mood disorders. Prozac is in a class of drugs called selective serotonin reuptake inhibitors (SSRI), which are popular medications for people with depression. Prozac is also used to treat anxiety disorders, panic attacks, obsessive-compulsive disorder, and premenstrual syndrome. The drug is used for its effects in improving mood, sleep, appetite, and energy levels, all of which can be negatively impacted by depression and other mental health issues. It also helps with the urge to compulsively repeat tasks in people with obsessive-compulsive disorder. For that reason, Prozac is often the first-line drug for mental health problems that require medication.

Prozac is sold in pill form, and it’s only available as a prescription; however, it’s not regulated more strictly than that. Other drugs like benzodiazepines and opioids receive more legal scrutiny. Prozac is usually taken once per day.

Prozac does have some side effects, including strange dreams, loss of appetite, anxiety, diarrhea, and sexual dysfunction. Prozac can affect sexual dysfunction in several ways. It can lower your libido, make it difficult to achieve orgasm, cause erectile dysfunction, and decrease vaginal lubrication. However, as with any prescription, it’s important to keep your doctor up to date as to the drug’s effectiveness and side-effects you’re experiencing. There are no antidepressants that are a magic pill for mental health issues, and finding the right drug and dose for your needs may take trial and error. You may be able to find a dosage of Prozac or another drug that eases symptoms and avoids side effects.

How Does Prozac Work?

As an SSRI, Prozac primarily works with a chemical in the brain called serotonin. Serotonin is a neurotransmitter that relays specific messages all over the body. It’s also a feel-good chemical that’s closely tied to mood. It can regulate your emotional state, and it can have an effect on energy levels. Depression can sometimes be caused, at least in part, by a chemical imbalance in the brain that’s related to serotonin. Under normal circumstances, serotonin travels from neuron to neuron by being released to bind with serotonin receptors.

This is how nerve cells send signals. Excessive serotonin that doesn’t bind to receptors and serotonin that is detached from receptors can be reabsorbed into the neuron that sent it in the first place. This stops the chemical from having too much of an effect on the nervous system and recycles the chemical for later use. This removing and recycling process is called reuptake. Prozac is able to block the reuptake of serotonin, which allows more of the released serotonin to bind to receptors and stay there, sending a stronger, mood-regulating signal. The stronger signal caused more serotonin to be released throughout the body.

People with mood disorders may have some biological or psychological issue that makes it so that the normal mood-regulating abilities of serotonin aren’t enough to prevent depression symptoms. Prozac can boost your mood and correct chemical imbalances that lead to depression.

Does Prozac Have a High Abuse Potential?

Prozac isn’t among the most commonly misused prescription drugs like benzodiazepines and opioids. From a legal standpoint, Prozac isn’t considered to have a high abuse potential, and it’s regulated as Rx-only, which means you need a prescription to get it, but it’s not regulated like scheduled drugs. Drug abuse and addiction usually involve drugs that act quickly and trigger a euphoric release or influence on feel-good chemicals. Unlike other prescriptions that are commonly abused, Prozac doesn’t cause a noticeable euphoric effect that may be desirable for recreational users. While Prozac can boost your mood, it doesn’t do so to a euphoric degree. 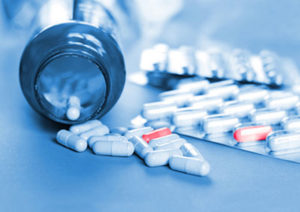 While Prozac isn’t likely to cause a severe substance use problem, it can cause a degree of chemical dependency. As you take the drug, your body gets used to it being in your system. If you stop taking it suddenly, you’ll go through what’s called discontinuance syndrome, which involves withdrawal symptoms. Prozac withdrawal symptoms often involve something called rebounding, which is the return of symptoms that the drug was being used to treat. In this case, it can cause anxiety, depression, and a loss of energy.

Other symptoms can include dizziness, poor balance, headache, nausea, insomnia, tingling or numbness, and hallucinations. In some cases, withdrawal symptoms can be extreme, causing severe depression and thoughts of suicide. However, Prozac is one of the drugs in its class that are more forgiving to skipping or missing a dose.

What Happens If You Take Too Much?

Prozac is a prescription medication that comes with prescribed instructions. Your doctor will give you an appropriate dose of the medication for your needs. But what happens if you take more than that dose? Can you experience a Prozac overdose? Prozac isn’t known to cause deadly overdoses like opioids or benzodiazepines. However, it is possible to overdose on Prozac, which can lead to some extremely uncomfortable and even dangerous symptoms. If you accidentally take too much, your overdose symptoms will likely be mild. These symptoms may include headaches, drowsiness, tremors, fever, tremor, and nausea.

Most cases are mild and not deadly, but in some cases, it can cause heart failure or muscle tissue damage. This can be treated to avoid life-threatening consequences. Serotonin syndrome can happen when you mix Prozac with another medication that causes an increase in serotonin levels. Even some drugs that aren’t used for mental health disorders can have this effect, including some cough medicines. It’s important to tell your doctor about all of the medication you’re taking before taking a new one.