Did you know anxiety disorders affect at least 40 million people in the United States? It is the most common type of mental illness in the country, and only 37 percent of those who have it will ever receive treatment. These disorders can change how a person processes their emotions and behaviors.

Mild anxiety might just be vague and situation-based, but severe anxiety can affect a person’s daily activities. Severe anxiety can be crippling and steal someone’s entire life away from them. It was for this reason that drugs such as Restoril were created.

The American Psychological Association (APA) defines anxiety as “an emotion characterized by feelings of tension, worried thoughts, and physical changes like increased blood pressure.” People who have anxiety often have recurring and intrusive thoughts or concerns.

They may avoid situations altogether out of worry, and they may experience trembling, sweating, dizziness, and rapid heartbeat, among other symptoms. It is important to distinguish the difference between normal feelings of anxiety, such as feelings before a test and an anxiety disorder that requires medical attention to treat the condition.

This has been a condition that has affected people for centuries, and in 1904, chemists introduced barbiturate drugs as a means to treat sleep, anxiety, and seizure disorders. These drugs were extremely effective in the short-term, but it soon became apparent the carnage that these drugs left in their wake.

This prompted scientists and doctors to develop new types of medications that were less addictive but effective when treating these disorders. Benzodiazepines were created in the 1960s, and the medications offered similar medical benefits but with less risk of abuse.

Unfortunately, as beneficial as drugs like Restoril can be for treating people with mental health disorders, they also carry a risk of developing a substance use disorder. Restoril addiction is a serious disease that can lead to long-lasting consequences if it is left untreated.

If you have become addicted to Restoril, you must attend treatment at a professional facility as it could be the difference between life and death. The sooner you enter treatment, the sooner you can reclaim and rebuild your life. Addiction is a lonely disease, and it comes with outward symptoms that we will discuss below. 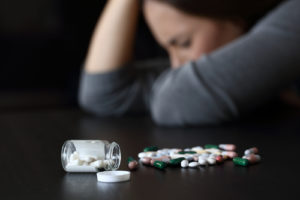 Benzodiazepines were synthesized in the 1950s and marketed in the 1960s when they became popular for treating ailments effectively. By the time the 1970s came, benzodiazepines were the most commonly prescribed drug in the world, and 1981 marked the introduction of Restoril. It was marketed as a benzodiazepine that could treat insomnia and anxiety effectively due to a longer half-life and duration of action. This made it great for people who can’t stay asleep.

Restoril works similarly to other CNS depressants. It affects a naturally occurring chemical called gamma-Aminobutyric acid (GABA). The drug is designed to attach to the GABA receptor and manage excitability in the nervous system. One of GABA’s primary functions is to help calm you down when it’s time to rest. In cases of those who have anxiety and sleep disorders, they have overactive nervous systems. Drugs like Restoril can help correct this chemical imbalance in the brain.

What Are The Signs of Restoril Addiction?

Restoril addiction can be a dangerous disease, so it is important to know the signs and symptoms. Those familiar with the signs can potentially thwart any long-term damage that can occur from addiction. Addiction has common warning signs, but this could depend on many factors. These include:

If you’ve been using Restoril and are worried about developing a substance use disorder, the first sign to look out for is a growing tolerance. If you have been taking Restoril for several weeks, and the initial dose prescribed is not offering the same effects, it could be the body getting used to the drug. The brain adapts very well when it comes to foreign substances.

If You Are Worried about a Loved One Who Is Using Restoril, There Are Behavioral Signs That Point toward a Substance Use Disorder. These Include:

What Is Involved in Restoril Addiction Treatment?

Although addiction is a chronic and progressive disease, it can be treated with therapies and quality care. Drugs like Restoril require special attention during treatment because of the various risks it poses. Drugs like benzos, barbiturates, and alcohol can be extremely dangerous during withdrawal, a period that also can produce symptoms that can cause seizures and delirium tremens.

Treatment for benzodiazepine use starts with medical detoxification, the most intensive phase of care. This period involves 24-hour medically supervised care for up to a week. In severe cases, it could last longer. As your body attempts to stabilize without the presence of Restoril, medical professionals may give you medication to ensure you’re comfortable throughout the process.

Following detox, clinicians will determine the next level of addiction treatment based on your specific needs. If you have ongoing health issues, they could decide to place you in an inpatient residential program that will offer more intensive care. If you have fewer urgent needs and no history of relapse, you could be placed into an outpatient program that will allow you to continue working or attending school while receiving addiction treatment.

How Dangerous Is Restoril?

A few factors make Restoril dangerous. This can include when they’re mixed with other depressants like opioids or alcohol, and during withdrawal. Thirty percent of opioid overdoses involve benzodiazepines, and these startling statistics indicate how deadly Restoril can be given the situation.

During an overdose, the drug can suppress your nervous system to the point of slowing down or stopping breathing altogether.