Can Adderall Use Lead to Depression? Here’s What the Research Shows

Adderall is the brand name of a prescription medication that combines amphetamine and dextroamphetamine. This drug has been approved by the U.S. Food and Drug Administration (FDA) to treat attention deficit hyperactivity disorder (ADHD) in both children and adults. In some instances, the medication is prescribed to treat symptoms of narcolepsy, like daytime sleepiness.

In rare instances, the medication is prescribed off label to treat depression. This newer approach to using the medication is closely scrutinized, as a side effect of Adderall can be depression — either as a comedown symptom, withdrawal symptom, or long-term side effect from taking this amphetamine medicine for months or years, especially for off-label use or nonmedical reasons.

This prescription stimulant was approved for prescription use in 1960, but it became much more popular in the 1990s as doctors’ ability to recognize ADHD improved, so more children received prescriptions for Adderall and Ritalin, another ADHD medication.

Although a person who has ADHD is not likely to abuse Adderall to get high, because this stimulant does not cause a high when taken as prescribed by people who need it, wider access to the drug did lead to an explosion of Adderall abuse. 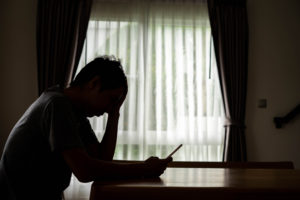 Between 2002 and 2010, there was a 45 percent increase in the number of prescriptions for Adderall among teens and young adults in the U.S., so the drug was easier to access through diversion. In many instances, adolescents with ADHD would give their friend without ADHD the medications, and those teenagers typically took Adderall as a “study drug,” believing the stimulant would enhance their performance as it had their ADHD peers’ performance.

Many teenagers and young adults also abuse Adderall for a euphoric high. They mistakenly believe the drug to be safer than illicit drugs like cocaine or meth. Adderall is a Schedule II medication, according to the U.S. Drug Enforcement Administration (DEA), meaning that doctors must closely monitor prescriptions for the substance.

Abuse of stimulants, including Adderall, increases the risk of mood disorders like depression and anxiety as a side effect of the drugs. This could occur as one of the comedown symptoms — as the intense, energetic high decreases, fatigue and depression begin — or it could become a chronic problem from long-term abuse.

Depression is an umbrella term for several types of mood disorder with related symptoms and clinical presentation. This mental health condition is serious, and it can dramatically affect the quality of one’s life.

For people who have depression, treatment is primarily counseling or talk therapy, with lifestyle changes and, increasingly, doses of antidepressants. Although an estimated that 1 in 15 adults, or about 6.7 percent of the adult population in the United States, is affected by depression every year, and 1 in 6 people (or about 16.6 percent) will experience symptoms of a depressive disorder at some point in their lives, this condition is very treatable.

Symptoms of Depression Include:

For a diagnosis of any kind of depression, two or more of these symptoms must be present for two weeks or longer without relief.

Types of depression include:

Risk factors for depression include genetics, family history, personality, environmental factors including trauma or toxins, and substance abuse. These all increase the risk of developing depression, and they can make the symptoms of this mood disorder worse.

What Is the Link Between Adderall Abuse and Depression? 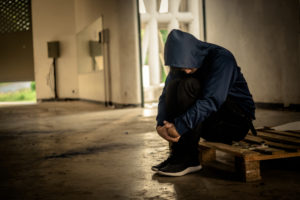 Mental illness and substance abuse are closely related, and this includes depression and Adderall abuse. People who struggle with depression are more likely to abuse substances, both stimulants and depressants, because these drugs change neurotransmitter levels and elevate mood. People who have ADHD are also at risk of developing depression, so it is important for clinicians to recognize the legitimate need for Adderall.

The crash or comedown associated with one instance of Adderall abuse can be uncomfortable. A person who abuses Adderall recreationally may not be addicted to this drug specifically, although they may consume other substances in a problematic pattern.

A comedown occurs after taking nonmedical doses of the drug to get high. Symptoms like fatigue, anhedonia, or sadness develop because the brain has less ability to produce serotonin and dopamine. Symptoms of an Adderall comedown include:

For a comedown after one instance of abuse, these symptoms may be mild, but they may be uncomfortable enough to trigger a binge of the drug to feel better. Binges are an aspect of meth and cocaine abuse, and they have been known to occur in people who abuse Adderall, too. A binge can trigger long-term, consistent abuse of the drug, leading to physical dependence, tolerance, and compulsive behaviors associated with addiction.

If you do abuse Adderall once, to get high or to improve your ability to work or study, you may experience a comedown the next day. It is important not to take any more of the drug without a prescription and to manage your symptoms by staying hydrated, taking over-the-counter painkillers for physical discomfort, and eating healthy foods. Taking more Adderall is dangerous, and it can lead to addiction.

Adderall as a Treatment for Depression

Stimulants like amphetamines have been prescribed for a century or more to treat depression, but in modern medicine, this approach is highly criticized. Some medical researchers are investigating if amphetamines like Adderall can be used as a depression treatment for complex forms of depression, especially when depression is a secondary mental health condition that occurs alongside ADHD or other behavioral disorders. The combination of Adderall and antidepressants must be closely monitored, however.

People who have ADHD may also have depression because it is a struggle to fit into a neurotypical world, especially before these individuals receive a diagnosis of ADHD. This is usually reactive depression, based on several frustrating situations that may feel insurmountable. It may be compounded by others blaming the person for being unable to complete a task or pay attention. Symptoms of ADHD can also mimic depression, especially if the person feels low or guilty when they visit a doctor for a diagnosis.

One way for clinicians to distinguish between these two conditions is the age of onset for symptoms. Typically, younger children will show some ADHD symptoms, while depression may not begin until adolescence (especially around puberty) and adulthood. ADHD symptoms are also consistently present, while depression may wax and wane even if it is persistent. ADHD mood shifts are rapid, often described as crashes or snaps, while depressive moods usually last for a day or more; in many cases, it may take several weeks for a low mood to lift.

People who have ADHD have lower levels of dopamine and serotonin in the brain, which may explain some of the overlap in symptoms between depression and ADHD. It is important to examine the behavioral response to antidepressants or Adderall and change the prescription if new information alters the mental and behavioral diagnosis. This reduces the risk of addiction to Adderall.

Is Help Available To Overcome Adderall Abuse and Depression?

Adderall abuse is dangerous, so it is important to get appropriate, evidence-based addiction treatment. For someone who struggles with Adderall abuse and depression at the same time, the treatment program must be tailored to treat co-occurring disorders.