Adderall Tolerance: How to Reduce or Reset Tolerance to ADHD Medication

If your doctor prescribed Adderall to treat you for attention-deficit hyperactivity disorder (ADHD), you’re not alone. In 2019 alone, Adderall was the 24th most prescribed medication in the United States. An estimated 24 million prescriptions were given out that year. Since it’s prescribed by a doctor, it’s common to think it’s relatively safe and void of dangers. However, that’s not true. Prescription medication can be as dangerous as illicit drugs when abused. The primary difference is it’s not contaminated because it’s made in a sterile lab. If you’ve been using the medicine and developed an Adderall tolerance, you want to know how to reduce and reset that tolerance to the ADHD medication.

ADHD is commonly diagnosed in children. Girls are often misdiagnosed because they present symptoms differently from boys. An estimated 6 million children between the ages of 2 and 17 are diagnosed with the condition, equating to 9.4 percent of the entire population. Boys are more likely to be diagnosed than girls. However, that could be the result of misdiagnosis. Many children are given stimulant drugs like Adderall, which are proven to be highly effective. However, their use can result in tolerance, dependence, and even addiction.

One of the primary issues when it comes to Adderall is that many children grow out of ADHD. As some get older, their symptoms become manageable without medication. When they get to college, their friends might ask if they can buy their prescription from them. It’s easy money, so why not? Unfortunately, this is dangerous. Those using Adderall in this way likely don’t have a disorder and will experience euphoria from the medication, leading to them using more and more to stay up all night and study. The result? Adderall tolerance, meaning they need more of the drug to experience the same effects as when they started using it.

If you’ve developed a tolerance to Adderall, you might notice it’s becoming far less effective than when you began using it. You might wonder, “can I reduce my Adderall tolerance?” The answer is yes, you can. Unfortunately, it’ll require you to reduce your intake or even stop, which might be challenging if you’ve become physically dependent. If you have, you’ll experience withdrawal symptoms, which is a sign you’ve developed a substance use disorder (SUD). Unfortunately, an estimated 46 percent of those in the United States are addicted to prescription stimulants like Adderall.

Below, we’ll discuss your options and what you can do to reset an Adderall tolerance.

How Do You Become Tolerant to Adderall?

When you use Adderall as prescribed by a doctor, becoming tolerant of its effects will take longer than if you’re abusing it. However, it does happen, which is normal. You must communicate with the prescribing physician and let them know what’s happening. They will determine how effective the current dose is at treating your symptoms and could increase the dose if they see fit. Increasing the dose a little bit at a time is crucial to fight off the misuse of Adderall. Those who start using Adderall will also need dose adjustments to determine the right balance.

When you take Adderall in greater quantities than prescribed, your body will adjust to that dose and become tolerant to the effects. You will not receive the same benefits as you once did, and your symptoms may return. You should never attempt this alone; always rely on your doctor. The more Adderall you consume, the higher your tolerance will become, leading to extremely dangerous doses for efficacy and misuse. Eventually, a high dose won’t affect you, and high tolerance to a stimulant like Adderall can lead to severe issues with your health.

How Dangerous Is Adderall Addiction?

Adderall addiction is extremely dangerous and shouldn’t be overlooked just because a doctor prescribes it. It’s no different from an addiction 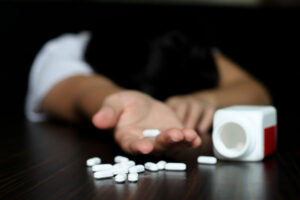 to illicit street drugs like methamphetamines, cocaine, or heroin. Adderall addiction can cause severe headaches, heart problems, anxiety, depression, insomnia, and stimulant-induced psychosis. These side effects will affect each user differently. While some may have milder effects, others may get it much worse.

It’s also dangerous because if you cannot get more Adderall, the user could turn to the black market and purchase street drugs. Drugs today are notorious for being laced with fentanyl, even if you’re not buying opioids. This is why the U.S. Drug Enforcement Administration (DEA) created the “One Pill Can Kill” campaign to shed light on the topic. Anything from cocaine to pressed Adderall pills can contain the synthetic opioid. Fentanyl can kill you instantly.

Adderall addiction can lead you down the road of other addictions. When your dopamine high runs out, users will try other drugs to recreate that experience Adderall can’t give them anymore. Prolonged Adderall use can also lead to neurotoxicity, which occurs when the increased levels of neurotransmitters in the brain are permanently damaged. The damage is irreversible and changes how you control your mood, learn, remember information, and think.

How Do You Reduce an Adderall Tolerance?

As we’ve established, misusing and abusing Adderall will cause you to become tolerant of the medication. If you genuinely need the drug to manage your ADHD symptoms, you will not experience its therapeutic effects anymore. Your tolerance will be out of control, and you’ll have to take too high of a dose to manage your symptoms. This is not feasible and can be dangerous. However, you can reduce your Adderall tolerance safely by quitting. You must do this by slowly reducing the dose over time to avoid uncomfortable and sometimes severe withdrawal symptoms.

Depending on how much Adderall you were using, your tolerance could decrease dramatically in a few months. However, for some, it may take even longer. Your doctor might suggest taking other stimulants to keep your ADHD in check and manage your symptoms during that span. You could also try natural remedies but always speak with your doctor beforehand. Only licensed physicians can determine the best course of action.

How Do You Prevent Adderall Tolerance?

There isn’t a single method to help you prevent an Adderall tolerance. As mentioned above, it’s inevitable if you’re taking the medication. However, following the dose as prescribed by your doctor is the safest means of preventing it from increasing too fast. Since we all possess different genetic makeup, the path to tolerance is not universal. The only way to prevent Adderall tolerance is to not use the medication at all, but that’s not a reality for some. You should always discuss any concerns you have with your doctor.

Adderall addiction is dangerous, and if you’ve become tolerant of the drug, it is the first sign of a substance use disorder. How you respond to that will determine this severity, but you must always speak to your doctor if you think something is wrong. Many people handle tolerance without issue, while others will take more to combat it. It’s important to know the signs of Adderall abuse to determine if your problem is becoming severe.

The most common signs of Adderall abuse include:

As mentioned earlier, don’t let the fact that Adderall is from a pharmacy and approved by a doctor fool you. Adderall addiction is no different from illicit street drugs. It can lead you down the same dark path. The only difference is that it’s pure and made in a lab. It can still cause you pain, grief, and the uncontrollable urge to get more. If you have to ask yourself if it’s a problem, chances are it is.

Fortunately, help is available. If you’re looking to reduce your Adderall tolerance or overcome an addiction to it, you can. All it takes is a commitment. Are you ready to remove your dependency on Adderall?