Ritalin Tolerance: What Happens When It Stops Working?

Ritalin, also known as methylphenidate, is a prescription stimulant used to treat conditions like attention-deficit hyperactivity disorder (ADHD) and attention deficit disorder (ADD). Ritalin prescriptions have ranked in the top 100 most prescribed in the United States in the past several years. In 2019 alone, U.S. doctors wrote an estimated 14,233,405 prescriptions for their patients. These figures indicate the prevalence of these conditions and the need for stimulant drugs like Ritalin. Although it’s highly effective in treating these disorders, Ritalin tolerance is a genuine concern among many, so what happens when it stops working?

Unfortunately, when a prescription medication stops working, you might be inclined to increase the dose, which can lead to severe issues. According to the National Institute on Drug Abuse (NIDA), an estimated 0.3 percent, equating to 758,000 people over the age of 12, had a prescription stimulant use disorder in 2020. If your doctor suggests increasing the dose to combat Ritalin tolerance, it’s different from an individual taking it into their hands. Your doctor has carefully thought about the risks and deemed it safe to do so, meaning you should always consult with them first.

Scientific evidence has pointed out that tolerance and dependence won’t occur in everyone. Ritalin tolerance occurs most often in those who use the drug frequently in higher doses. When it comes to misuse and abuse, tolerance is the first sign you’re becoming dependent or addicted to Ritalin.

How Ritalin Affects the Brain

According to the U.S. Centers for Disease Control and Prevention (CDC), 6.1 million children ages 2 to 17 were diagnosed with ADHD in 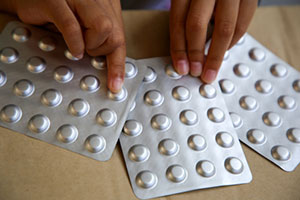 2016. Although Ritalin is one of many stimulant drugs used to treat the condition, it’s one of the more common drugs in this category. It’s a federally controlled substance due to its potential for misuse, which comes with the risk of severe side effects. Ritalin intensely impacts the brain and should be taken only under medical supervision. Even if you take it as prescribed, you run the risk of developing side effects.

Ritalin affects dopamine and norepinephrine activity in your brain. Dopamine is a naturally occurring neurotransmitter responsible for movement, pleasure, and attention span, while norepinephrine is a stimulant. When you ingest Ritalin, it increases the activity of both neurotransmitters by blocking the reabsorption in neurons located in the brain. The chemical levels increase slowly, which is why your doctor likely will opt for the lowest possible dose of Ritalin to start and may increase it in small increments if needed.

Ritalin makes it easier for users to concentrate, control their actions, and fidget less. Users also report that it is easier to listen and focus at school or work. However, if you’re an anxious person or have been diagnosed with anxiety, Ritalin will intensify your existing symptoms. If you’re prone to seizures, Ritalin will also cause more of them. Please, provide your doctor with a comprehensive history of your health to determine if Ritalin is safe for you.

Drug tolerance, not to be confused with drug dependence, is identified by the National Institute on Drug Abuse as a state where an individual no longer responds to drugs the way they initially did. If you’ve become tolerant of Ritalin, you’ll need more and more of the drug to achieve the effects you once felt. While tolerance and dependence are related, there are clear differences. For example, if you’re dependent on Ritalin, you’ll go through physical or psychological withdrawal symptoms when you stop using the drug or lower your dose.

The most common signs of Ritalin withdrawal include the following:

How Quickly Does Ritalin Tolerance Occur?

When it comes to tolerance to any drug, there is no predetermined figure that says if you take this amount for a specific period, you’ll become tolerant. Some people can develop Ritalin tolerance after a few weeks, while others won’t develop it at all. Many who use Ritalin report never developing a tolerance. Little is known about this subject despite rigorous testing and studies.

Ritalin tolerance isn’t the same across the board. There are three types of chemical tolerance to prescription stimulants. These include the following:

Any of these tolerance types will indicate you need a break from Ritalin. However, your treating physician could feel otherwise and increase your dose gradually until you find relief. If this does not work, they might consider a different medication.

Few medical researchers are in agreement that CNS prescription stimulants like Ritalin will lead to tolerance because there is no reason to explain why it occurs. According to a study published in Innovations in Clinical Neuroscience, there are four proposed components as to why stimulant tolerance occurs:

Another concern that could lead to Ritalin tolerance is potentiation, which is when drugs are used together to increase the effects. For example, many people mix opioids with alcohol to potentiate the effects of the depressants. However, when it comes to Ritalin, individuals who become tolerant of its effects might use other drugs to experience the effects the stimulant causes.

The most common potentiators include:

One way to prevent Ritalin tolerance is to start by using the lowest effective dose, as little as possible. Taking a break can also reduce or eliminate tolerance, known as drug holidays, but can have undesirable effects. However, even going a few days without the medication can help reduce your tolerance. There are varying degrees of success with drug holidays, so you must talk to your doctor before taking drastic measures.

Your doctor could recommend that you take less Ritalin or take a break from it for a week or more. A break will allow your body to adjust to its absence in your system, enabling your brain to recalibrate its chemistry and function without it. However, as noted earlier, you could experience adverse symptoms. While it doesn’t necessarily mean you’ve developed an addiction, withdrawal symptoms are signs of dependence, which could require professional medical treatment.

The primary benefits of taking a break from Ritalin include the following:

While the positives may seem great on the surface, there are downsides of taking a drug holiday to consider, such as:

Again, only you and the prescribing physician can determine what’s right for you. Although Ritalin tolerance is part of addiction, becoming tolerant to a drug does not indicate you’re addicted to it. If you’ve been using Ritalin as prescribed, you don’t need to worry about this too much. However, if you’ve been misusing Ritalin or using it off-label for a specific reason, such as trying to lose weight, your mental and physical health is at great risk.

If you’re concerned about Ritalin tolerance, find out what can be done to overcome it.