Kratom is a naturally occurring tree species that is also called by its scientific name Mitragyna speciosa. The tree is indigenous to Southeast Asia, and it’s closely related to coffee plants. The plant is used as a traditional medicine in its native regions and may have been used for these purposes since the 19th century.

Leaves are often chewed to relieve pain and increase energy. Extracts are also used to treat coughs, diarrhea, and intestinal infections. Kratom has psychoactive properties that can cause a variety of reactions in the brain and body.

In some cases, stimulating and sedating effects can co-occur, resulting in a strange sensation of feeling both energized and relaxed. Kratom is officially considered to be an opioid, but no other opioid has its stimulant effects. 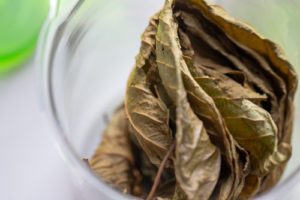 Kratom’s pharmacology is poorly understood, and researchers are still studying the exact nature of the way it works in the brain. At low doses, the drug’s stimulating effects are more prominent than its sedating, opioid-like effects. However, at high doses, it acts more like traditional opioids. In the brain, the drug works as a partial opioid agonist. That means it binds to opioid receptors and partially activates them. Other alkaloids found in kratom can also act as an opioid antagonist, which blocks opioid receptors without activating them. As an opioid, kratom isn’t as powerful as other options, but some believe these weaker effects can make it more useful as a treatment for opioid addiction. In fact, there are reports that the drug has been used for that purpose in Malaysia since the 1800s.

Though it has not been approved for this treatment, more people are turning to kratom to treat their opioid addiction. The U.S. Drug Enforcement Administration (DEA) published a paper on kratom in 2013, saying, “There is no legitimate medical use for kratom in the United States.”

What Are the Kratom Withdrawal Symptoms?

Kratom is a chemically addictive drug when it’s used for too long and in high doses. That means your brain may adapt to its physical effects by integrating it into normal brain chemistry. Your brain may stop producing its own endorphins and sedating effects, and when you stop using, you may start to experience the physical consequences of a chemical imbalance. Kratom may bind to opioids all over the body, causing full-body symptoms when you stop using.

People who go through opioid withdrawals often report experiencing flu-like symptoms that are more intense than the regular flu. Kratom has also been reported to cause symptoms not usually associated with the flu, such as aggression, hostility, and irritability.

Because kratom is also a stimulant, users who have become dependent on the drug may experience some symptoms that are typical of stimulant withdrawal, like depression and lethargy. Other kratom withdrawal symptoms include:

Opioid and stimulant withdrawal symptoms are not known to be deadly, but if you go through withdrawal on your own, without medical treatment, you may be risking some potentially serious complications. Opioid withdrawal can cause vomiting, diarrhea, and heavy sweating that can cause you to lose water quickly, leading to potentially dangerous dehydration.

This most commonly leads to fatalities when people who are going through withdrawal are incarcerated and under neglectful care. However, it’s possible for people who are detoxing on their own to experience dangerous consequences from dehydration. The possibility of overdosing is also present when attempting to detox at home.

The safest way to go through kratom withdrawal is with medical supervision. A medical detox program or a hospital can provide 24-hour care that can help you avoid dangerous symptoms. If you are thinking about quitting or if you’ve already started to experience withdrawal symptoms, learn more about safe medical detoxification.

What Are the Stages of the Kratom Withdrawal Timeline?

You will experience your first withdrawal symptoms eight to 12 hours after your last dose. The symptoms often start mild with depression, anxiety, nausea, and other flu-like symptoms. Between 24 hours and three days, your symptoms will start to peak, and you’ll experience more intense symptoms like powerful cravings, migraines, irritability, vomiting, sweating, and diarrhea.

After about a week, your body will start to return to normal, and your symptoms will begin to fade. Physical symptoms are usually the first to go, while psychological symptoms may linger. Symptoms like depression and anxiety might last much longer if they are left untreated. You may also have drug cravings and triggers that last a long time. Addiction treatment can help deal with these long-term issues.

How Is Kratom Withdrawal Treated?

Kratom withdrawal can be treated in a medical setting to ensure safe detox and avoid potentially harmful symptoms. The most dangerous symptom of withdrawal is dehydration, which can be treated or avoided under medical supervision.

In a medical detox program, you will be treated by medical professionals 24 hours a day. They can help you avoid dangerous complications, and they will also help to alleviate symptoms as much as possible. After you complete detox, on-staff clinicians can help you find the next level of care that’s ideal for your needs.

If you’ve developed a severe substance use disorder, a week of detox may not be enough to avoid a potential relapse. The full continuum of addiction treatment can help you learn to cope with cravings, and it can address any underlying problems that contributed to your addiction in the first place like depression or other mental health problems.