Xanax and alcohol are two potent depressant drugs used for opposite reasons. Xanax is a prescription benzodiazepine used to treat anxiety and panic disorders that can only be obtained from a doctor, while alcohol is a legal substance that anyone over the age of 21 can purchase legally. Alcohol is used for many reasons, including to unwind after a long day, for social purposes, and in some cases, to relieve anxiety. While both drugs are deemed safe in moderation, it begs the question: can you drink while taking Xanax?

Both drugs have their place in a person’s life. However, both drugs also have the potential for misuse. Experts have sounded the alarm about drugs like Xanax and the potential to create another deadly situation like the opioid crisis. An estimated one in five people who take medicines like Xanax misuse the medication, according to U.S. survey data. These statistics are twice as high as previously reported. Nearly 13 percent of those surveyed admitted to using the drug in the past year, which is twice as high as previously reported. From 1999 to 2015, benzo overdose deaths increased sevenfold from 1,135 to 8,791 deaths.

Don’t let its legality fool you. Alcohol is among the most dangerous substances on the planet. Even those who drink occasionally are subject to driving under the influence or hurting themselves while intoxicated. While many can drink alcohol without issue, there is a significant portion of the population that abuses the drink. A survey from the Behavioral Risk Factor Surveillance System (BRFSS) found that half the U.S. adult population drank alcohol in the previous 30 days. An estimated 16 percent admitted to binge drinking, and another 7 percent reported heavy drinking. Excessive alcohol use was responsible for an annual average of 95,000 deaths and 2.8 million years of potential life lost.

Again, both substances can be used without issue. However, mixing Xanax and alcohol can have fatal outcomes. Since both drugs are depressants, they potentiate the effects of each other, meaning that alcohol will make the effects of Xanax more dramatic, and the same with Xanax for alcohol. This combination can lead to fatal overdoses. The primary difference between Xanax and other benzodiazepines is its quick onset. Its effects come on quickly after consumption. Since Xanax is popular with existing drug users, they like to combine it with their drug of choice for a more extreme high. Using it alone isn’t an issue but in conjunction with alcohol? That’s a different story.

For that reason, if you or someone you love is abusing Xanax and alcohol, it’s important to know the signs and intervene before it’s too late. Below, we’ll delve into what you should know.

The Dangers of Mixing Addictive Substances

Mixing two or more substances, known as polysubstance abuse, includes the use of Xanax and alcohol. However, this can refer to mixing benzos and opiates or many other substances as well. Like Xanax and alcohol, these can also have fatal results. Some of the more common drug mixtures include cocaine and alcohol or marijuana and opioids, among others.

When you mix these addictive substances, it may not seem like a big deal since alcohol is deemed legal and because Xanax was given to you by a doctor. However, these two drugs are only safe in certain amounts and situations. Mixing the two can have potentially dangerous short-term and long-term effects.

If you’re prescribed Xanax and consume alcohol regularly, you should consult with your physician. They will likely tell you to stop using one or the other. If someone you know is abusing both drugs, it’s important to look out for side effects.

Side Effects of Mixing Xanax and Alcohol

When used in conjunction with one another, these individual effects are dramatically enhanced. They can cause new symptoms that wouldn’t occur when using one drug at a time. Using Xanax and alcohol together include the following short-term side effects:

Using Xanax and alcohol in conjunction with one another also increases the odds of severe, long-term side effects that include addiction. Using both of these drugs increases the odds of developing a stroke, heart disease, liver damage, as well as mental health conditions like anxiety or depression.

The most glaring side effect is overdose, especially when used together. It’s possible to overdose on Xanax alone, same with alcohol, so putting both of them into the mix is dangerous. Your body may be unable to handle a full dose, resulting in an overdose that can be life-threatening without immediate treatment.

College Students Are At Risk 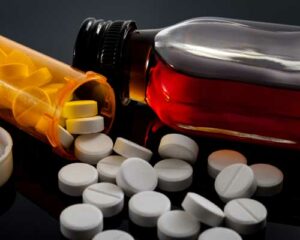 It’s hard to identify the typical polysubstance abuser. Why? Because there isn’t one. There are many people in society that we’d never expect to abuse drugs, but one area to pay attention to is college students. College is a time for experimentation and discovering who you really are. Still, many students engage in reckless behavior like binge drinking or abusing prescription drugs, leading to addiction. Those enrolled full-time in college are more likely to abuse drugs like Xanax and alcohol than those who don’t attend college.

Students with pre-existing conditions are more likely to abuse a drug like Xanax to relieve their stress and pressure in college. Some view drug consumption as a means to make new friends. The perception of partying and substance abuse is almost a requirement of making friends in college, and those with a prescription for Xanax are eager to use it and give it out to make friends. Meanwhile, those without a prescription will accept it to “fit in” with their peers.

College-aged students have a lot to contend with, and these times are a lot more challenging than we might understand. Sure, passing or failing college doesn’t have the same pressure adults face when it comes to potentially losing a job if your work is bad, but these pressures are new and something they’re learning how to battle. It’s easy to understand how someone can turn to these two drugs for relief. Fortunately, there are ways to fight addiction if it’s something they develop during college.

Treatment for Xanax and Alcohol Use

Identifying the signs that someone you know and love is mixing Xanax and alcohol has its challenges. In the earliest phases of addiction, the individual will appear to be normal. Most people can handle themselves early on, but as it progresses, signs become more evident the person is abusing drugs. Xanax produces symptoms like mildly impaired coordination, which isn’t a cause of concern at first and something you can easily overlook. However, looking for signs of alcohol dependence is typically easier to spot, especially if you know someone is taking a drug like Xanax.

The most common signs of alcohol abuse include:

Xanax is another drug where professional treatment is necessary. Like alcohol, using it alone can lead to severe withdrawal symptoms without the right help. The first step in the journey is medical detox, which will help you overcome the dangerous symptoms you face. Clinicians will provide medication that helps you remain comfortable until the worst has passed. Once complete, you’ll move into another level of care. If you’ve been abusing both drugs, it could determine how long this process takes.