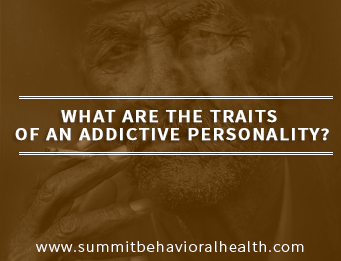 If you have a loved one who is addicted to drugs or alcohol, then you know that their behavior can be frustrating, unpredictable, and scary. Addiction is so powerful that many people become overwhelmed and the behavior is strictly dictated by their need for their drug of choice. It’s hard for the people around them to see them act out, often in an abusive or even criminal manner – and it can last for a long time.

You are not alone in the feelings that you are having about the behavior of your addicted loved one. Being witness to someone whose morality and personality has changed for the worse is difficult to deal with. The following list of traits that are common to people addicted to drugs or alcohol will help you figure out which behaviors might be a result of addiction so you can make the right decisions and take the actions that are best for you and your family.

Not all addicted people behave the same way. However, there are some characteristics that seem to be more common than others.

People who are living with addiction have to lie to loved ones about where they were when they were actually out drinking or using, or looking to do so. They often lie about where their money goes as well. And the deeper that they get into their addiction, the worse their dishonesty becomes.

When someone whom you have trusted begins breaking that trust, it may be hard to believe that they are doing that. Loved ones may be in denial, or they may genuinely be fooled by the addicted person. All the while, the addict is self-destructing.

If your loved one’s behavior has drastically changed, and the things they are saying doesn’t make sense, you have to pay attention to what that is saying. It probably means that you are being lied to. Some of the stories you hear from your loved one may be easy to check out, but most probably won’t. However, if these behaviors, evasiveness, and stories that don’t make sense continue to happen, then your suspicions are likely correct.

Typically, an addicted person will attempt to manipulate the people closest to him or her. That means that family and friends are the most likely to fall victim to this manipulation. In addition to lying, the addict will try to talk his or her way out of things, especially if there is a confrontation with friends or family about his or her drug use.

In order to be able to continue to use drugs or alcohol, an addicted person will use whatever he or she can think of to end the confrontation. You may hear things like: I have it under control. I can stop when I want to. You never want me to have any fun. You wouldn’t be saying that if you loved me. And the list goes on.

People who are in the throes of addiction will say anything that will allow them to continue to serve their addiction, whether it’s lying or pushing someone’s buttons, or tugging at their heartstrings, it’s all manipulation.

People who are addicted tend to blame others for all of their misfortune. Even when the addicted person was completely honest and responsible in his or her life before becoming an addict, they will usually place blame on someone else and not take any responsibility for the negative consequences that addiction causes. If they get fired from their job, it was their boss’s fault, if they wrecked the car, it was the other driver’s fault, etc.

Not every person who becomes addicted to drugs or alcohol becomes a criminal. However, the chances of criminal behavior happening is greatly increased when the person has a drug or alcohol problem. Drug addicts usually run out of money at some point, and because their need for drugs and aversion to withdrawal are so strong, they often turn to stealing to pay for their drugs.

Of course, alcohol is one of the biggest contributors to assault and domestic violence offenses, and DUIs that can result in property damage, injuries to others, and even fatalities.

It goes without saying that people who are using drugs or alcohol act without considering the consequences. Typically, impulsiveness and not thinking about the impact that an action may have on someone else are behaviors that indicate an addictive personality. This impulsiveness may lead to promiscuity, using more serious drugs, and other risky behaviors.

Not all people who are addicted commit physical violence against others, but it is common. Drug and alcohol use can make a person paranoid, angry, and aggressive, and impulsiveness can cause them to act out abusively when they are using or drinking.

Most commonly, those closest to the addicted person – spouse or children – bear the brunt of the addict’s abuse. There may be verbal and emotional abuse as well. The family likely feels like they have to walk on eggshells to avoid being verbally or physically attacked.

What if My Loved One Has These Traits?

If you have recognized that your loved one has some of the above-listed personality traits and you think that they may have a drug or alcohol addiction, it may be time to try to get them help. Unfortunately, that is often hard to do unless the person is ready and willing to accept help. Having a discussion with him or her about treatment when you believe they are sober is your best bet. An addiction treatment center like Serenity at Summit can help both you and your loved one.

If they will not agree to seek help, then the most important thing you can do is take care of yourself and the rest of your family. Talking with an addiction counselor will help you decide what action you need to take to protect yourself.