Demerol is a powerful opioid that is used to treat moderate-to-severe pain. It is most often used during or after surgery and other medical procedures and falls into a class of medications called narcotic analgesics. It changes how the body senses pain, but this can be dangerous because of how addictive opioids are. The perception of opioids not being as addictive as they actually are is partly responsible for the crisis the U.S. is currently facing, and this has made doctors who prescribe the drugs much more careful about doing so. Opioids are highly addictive, and deadly overdoses have been linked to doctors’ overprescribing practices.

The U.S. Centers for Disease Control and Prevention (CDC) recently released dating showing that drug overdoses in 2017 were so detrimental that it lowered the life expectancy among Americans. While it was not strictly drugs contributing as suicides are also at a high level, we still saw a staggering 70,000 overdose deaths. Opioid drugs are at the forefront of this battle, and despite the national attention they have received, the numbers continue to rise. It is a significant concern for the current generation when they are faced with tackling so many obstacles to survive.

The reality when it comes to opioids and pain relief is the fine line between using as needed and abusing for pleasure. These lines are too often blurred, which has resulted in an estimated 115 people every day dying from opioid-related overdoses. The truth of the matter is the United States is suffering from a pain problem, and a drug like Demerol can give someone that first rush, which is where they get their start. The drug is used to treat acute pain after an accident or pain from surgery, but this rush and euphoria could be where it starts. Innocent pain relief that turns into something morbid is all too common today.

Opioids are produced naturally from the opium poppy plant. Many of these prescriptions are made from the plant itself, but others are synthesized by scientists in a lab. This can greatly alter their strength, and synthetic opioids can cause even more of a headache for those treating addiction. There are medicinal benefits when it comes to opioids, which is why they are used, but there is a dark side that has become the norm in American society. Spotting signs of addiction and learning about how it can be treated can help people overcome substance abuse disorders.

Demerol, which is also known as Meperidine is a narcotic drug that was derived synthetically in 1939 as an anticholinergic agent. The chemists later realized that it had analgesic characteristics, and in early studies proved to be a great alternative to morphine due to the effects on the body regarding respiratory depression and chemical dependency.

It works in the central nervous system (CNS) on organs composed of smooth muscle. This drug was not designed for the treatment of chronic or long-term pain but rather as a means of acute pain in a medical type setting.

It is most effective for short-term pain after an injury or during childbirth. This does not mean the drug cannot be abused. Demerol is a very potent drug and using it can lead to addiction in a short period. It works by binding to the natural opioid receptors found in our brain and blocks pain. As a side effect, it causes a rush resulting in pain relief and relaxation. The difference between Demerol and other prescription opioids is its quick onset. It can be effective in as little as five minutes when administered intravenously. Doctors must be wary of who they give the medication to and monitor for signs of addiction.

What Are the Signs of Demerol Addiction?

Early stages of Demerol addiction may not show outward signs that can be traced to a substance use disorder. During this time, it is not something that should be taken lightly. Becoming aware of the signs can often be the best defense, and there are symptoms that you should look out for if you or a loved one is slipping into a Demerol addiction.

A growing tolerance is the first stage of addiction. This means the user will take higher doses than what is prescribed or take the drug in a way not intended such as without a prescription. This is the first phase of a substance use disorder that can yield outward signs.

Tolerance is when the body begins to adapt to Demerol and requires higher doses to achieve the effects once felt by a normal dose. If your usual dose does not give the same effects as it once did, it is a sign you are becoming tolerant. The longer drug use continues, the less effective the doses will become. This will eventually become a dependence, which is the brain’s requirement of maintaining normalcy. Demerol use will become necessary to maintain normalcy and avoid withdrawals.

Addiction is the last stage of a substance use disorder, and it can be defined as continued substance use despite the harmful consequences that result from such use. It is a complex condition that can change the course of an individual’s trajectory distorting thoughts, behaviors, and bodily functions. If Demerol use is adversely affecting school or work and you continue to use, this is a sign you’ve developed an addiction.

What is Involved in Demerol Addiction Treatment?

No one should ever feel alone in trying to overcome addiction because help is right around the corner. Treatment is more accessible than it’s been in past years because of bills set forth by Congress, and there is no reason to bear the burden of addiction a day longer. Addiction is a condition that will be with the person for a lifetime, but it can be managed with tools and therapy sessions. These foundations from treatment will transform recovering users into who they’ve dreamed of becoming.

The first and most difficult step of treatment is medical detoxification. This will allow the client full access to a team of trained addiction specialists. In detox, clients are monitored 24 hours a day and medication may be provided to alleviate withdrawal symptoms depending on the situation. This process will help the client obtain a sober mindset as comfortably as possible. 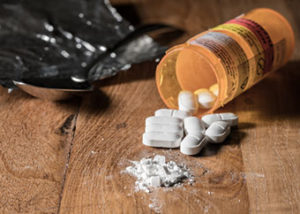 Detox will rid the body and mind of all foreign substances in their system. This is one of the most significant pieces in the continuum of care, and this should never be considered alone.

The next stage in the continuum of care often places the client into a residential treatment center. They will live on-site for 30 days to 90 days and participate in various therapies to help them understand their addiction from a psychological perspective. Cognitive behavioral therapies will help them understand the root of their addiction and help them change how they react in scenarios outside of treatment. There are several other therapies including, individual, group, and family that will begin healing the client all around.

Depending on a multitude of factors ranging from a history of relapse to threats at home, the client could be placed into an outpatient treatment program. The same type of therapies are still implemented to those in outpatient, but the main difference will be the ability to go home once they conclude. This is a useful practice for people who balance career or school with their sobriety.

Admitting being addicted to a prescription medication that was once beneficial is difficult, but the caring team at Serenity at Summit wants to help. If you or someone you love is dealing with Demerol addiction, the best chance they have for a better life is to enter treatment to face their addiction. Serenity at Summit’s specialists want to hear your story today and help you restore order to your life.