Do the benefits outweigh the risks? That is the age-old question that must be answered before one receives treatment for a sleep disorder. Are you one of the 70 million Americans who struggles with one of these disorders annually?

If you are, it’s a probability the doctor has offered you prescription medications such as eszopiclone, brand name Lunesta,  as an option to combat the issue. The problem is that people oblige in using these medications without any clear warnings about possible outcomes. It’s easy to understand why those who use Lunesta or any sedative-hypnotics begin in the first place.

For some, going to sleep is more like a chore than a reward. Tossing and turning all night only to get out of bed feeling worse than the night before is not ideal. When someone feels this way and is expected to carry on the rigors of a career, it adds that much more pressure. An inability to sleep can cause illness, a lower sex drive, car accidents, memory loss, heart disease, and diabetes. These are all major issues that can contribute to living an unhappy and less productive life. That is why the importance of sleep is continually highlighted, and this is why drugs such as Lunesta were created.

Initially, barbiturates and benzodiazepines were brought into the spotlight to treat symptoms related to insomnia, but over time, it became apparent how addictive the drugs are. A more promising solution was necessary to restore sleep to the growing number of those dealing with insomnia or sleep-related disorders. While Lunesta is technically less addictive than the drugs that preceded it, has a perception of being safe, which comes with its own set of issues. This, in turn, causes people to begin abusing the drug because of the misinformation.

This is not the case, and Lunesta is by no stretch of the imagination safe. There are significant dangers, such as the possibility of seizures if there is sudden stopping of the drug, that can be traced back to its use, and it can become an issue, even when it’s taken as prescribed. There are specific dangers such as memory loss, depression, and organ damage as a result of abusing the drug. Although it carries less of a risk of addiction, the potential is still there if used regularly for just a few weeks.

How Does Lunesta Work?

Although Lunesta (eszopiclone) is branded as a sedative-hypnotic, it works very similarly on the brain as a benzodiazepine or even a barbiturate. It does this by increasing the levels of a neurotransmitter known as gamma-Aminobutyric acid (GABA). GABA is a natural chemical in our brain that blocks and inhibits the nerve signals responsible for stress, anxiety, and fear. GABA works by maintaining the feelings of calmness.

Lunesta imitates the neurotransmitters by binding to the brain’s GABA receptors. It then activates them to create an overproduction of GABA. The difference between how Lunesta and other drugs work is that benzos, for example, bind with all GABA receptors, whereas Lunesta targets the areas that are responsible for inducing sleep.

Over time, however, GABA receptors become less sensitive and have trouble creating the chemical naturally. This will, in turn, cause Lunesta to become less effective due to the tolerance built up and start something called rebound insomnia. This is when the initial symptoms you were treating return more prominently.

Another danger can occur when someone may begin mixing one class of sedative with another which can increase the risk of overdose and over-sedation, and more so when taken with other sedatives including alcohol, benzodiazepines, and barbiturates.

What Are the Signs of Lunesta Addiction?

Substance use disorders are often difficult to point out in the early stages, and this is especially true with drugs that doctors prescribe. The medications serve a purpose and allow us to retrieve the life we were desperately needing. So how does one determine when the line between relief and addiction has been crossed? Knowing the signs and symptoms can address some concerns.

If you’re the one who is using the drug, it is difficult to determine if using Lunesta has turned into a full-blown addiction. It is often too late for some to recognize that this has become a problem, and in that case, it will be more difficult to treat.

Someone who has engaged in long-term use of the drug will exhibit outward symptoms that can point to abuse. It will show itself with many side effects which can include:

Once abuse moves forward into an addiction, all control will be lost when it comes to Lunesta use. This means someone abusing Lunesta will begin taking it compulsively and make using the drug their primary goal. They will do this at all costs, even sacrificing relationships or responsibilities like school or work.

At this point, a person will start to display behaviors consistent with a substance use disorder. These signs include:

If anyone you know, including yourself, has exhibited any of these behaviors, it may be time to discuss the option of professional addiction treatment. Addiction is a chronic disease that if left untreated can be fatal. Fortunately, it is a disease that can be treated with the right therapies, addiction services, and support.

What Is Involved in Lunesta Addiction Treatment? 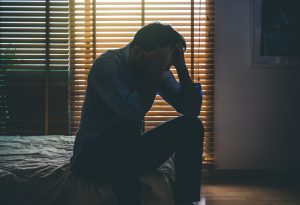 Since Lunesta works in the part of the brain that involves GABA, the treatment must be more intensive. This is because it falls under the category of depressant drugs, and depressants such as alcohol or benzodiazepines pose severe consequences during the withdrawal phase. While others drugs like opioids may be uncomfortable, they are not dangerous because they affect a different part of the brain. For this reason, medical detoxification is necessary when dealing with Lunesta.

The detox process will clear any and all foreign substances from the client’s body while achieving a balance for the body and mind alike. During this time, the client will be monitored for 24 hours a day for up to a week depending on the severity of their addiction. In some cases, the client could participate in an outpatient detox, but this will all be determined by an addiction specialist. Detox is also when the client is assessed and a course of action in their addiction treatment is determined based on that assessment.

All care requires a customized and unique approach, and because of this, all lengths of stay and requirements will vary from one client to another. Once the team finds the client stable enough to move onto the next stage of treatment, there are many options on where they could be placed. During the assessment, a dual diagnosis may be determined, which will alter where they are placed. Either way, it’s necessary to move into the next level of care. The longer the client remains in treatment, the higher chances of success they will have long-term.

These all provide their own benefits and will allow the client to delve deep into the root of their addiction. Therapy will also give the client an opportunity to learn their triggers and the tools to work through them. It is a rigorous process changing behaviors that plagued someone for many years, but what matters is following through. The continued attendance of therapy and treatment is the best relapse prevention.