It’s hard to avoid the opioid epidemic that has affected the United States, and because of this, it is shaping the way pain is treated. In the late 1990s, pharmaceutical companies reassured the medical community that patients would not become addicted to opioids.

It was at this point that physicians started to prescribe opioids at historical rates. This led to misuse on a national level of both prescription drugs and non-prescription opioids. This led to a national emergency being declared in 2017 when deaths from overdoses were unprecedented.

The year 2016 was one of the most tragic years in American history. An estimated 42,000 overdoses from opioids resulted in death. Forty percent of those deaths were tied to prescription opioid use. Drugs like Vicodin contributed to this because of how easily they were prescribed.

In many cases, individuals would get a routine procedure at the dentist, and they would be prescribed a month’s worth of Vicodin for pain that may last a day. This, as a result, led to either continued use of the prescription or users giving the medication to their family or friends. This pushed states like Florida to implement limits on what is prescribed on a patient-to-patient basis.

Vicodin is a combination of hydrocodone and acetaminophen meant to treat pain, but hydrocodone is the active ingredient. This is an effective means of pain management in those who follow instructions, but those who don’t can often fall victim to addiction. Vicodin belongs in a class of medications called narcotic analgesics, and it acts on the central nervous system (CNS) to slow down the messages pain receptors

When it is used for long periods, it can be habit-forming and cause physical and mental dependence. It’s the most prescribed opioid in the country and comes in tablet, syrup, capsule, and liquid form. One problem with Vicodin is that it is used in conjunction with acetaminophen, which can cause severe liver damage. Vicodin can be very dangerous when abused.

How Does Vicodin Work?

Vicodin works in our body by mimicking natural opioids that our brain produces. When the drug enters the brain through the bloodstream, it binds to opioid receptors that are responsible for relieving pain and stress. It works by inhibiting nerve impulses that stimulate feelings in the central nervous system and block them from reaching the brain.

Additionally, Vicodin works by affecting the levels of dopamine that is released in the brain. Dopamine is a neurotransmitter in the limbic system that is responsible for controlling functions like emotion, mood, and rewards. Depending on the dose, it can have a sedating effect. It relieves pain by blocking off the spinal cord and brainstem to stop the signals of pain. The increased production of dopamine gives off feelings of numbness and euphoria often known as the high.

Vicodin’s primary objective is to relieve pain, but an unintended side effect is the rush of dopamine and euphoric feelings that are linked to it. It’s easy to understand why people come back for more when they feel a sudden rush of energy and their pain is relieved. This is similar to how most opioids affect users, and it is also the reason behind the huge spike in opioid addiction. What happens is our brains begin to attribute Vicodin use as a reward because of the spike in dopamine. Eventually, this can turn into a life-sustaining habit.

As tolerance begins to build and the body gets used to the drug, a higher dose will be required to experience the effects that you felt with initial use. If you continue to increase the dose to achieve those effects, you run the risk of developing a dependence. This will cause withdrawal symptoms if you suddenly stop using or cut down on Vicodin.

What Are the Signs of Vicodin Addiction?

Addiction comes with a specific set of signs that if you familiarize yourself with, you will be able to see if someone exhibits them. Like all diseases, early detection is key; however, that is when addiction is most difficult to spot. As someone falls deeper into the cycle, they risk falling victim to drugs like heroin or financial problems as a result of their drug use.

Many people believe that being prescribed a medication means they cannot get addicted to it, but that is simply untrue. That is one reason why prescription opioid addiction is so dangerous. Denial is a part of addiction, and it is hard to break.

When you know the signs, it will be easier to tell when someone is using even in the earlier stages. If you suspect that either you or a loved one has developed Vicodin addiction, you must pay attention to these signs. The combination of hydrocodone and acetaminophen make this increasingly dangerous. This is what you should look for:

The National Institute on Drug Abuse (NIDA) defines addiction as a chronic, relapsing disorder characterized by compulsive drug seeking, continued use despite harmful consequences, and long-lasting changes in the brain. Once it becomes impulsive, it can be a serious problem and much more difficult to treat. The drug becomes the sole focus in their life, and the hobbies that were once enjoyed are now secondary to Vicodin.

There are more symptoms of addiction to watch for including:

If you or someone you love is experiencing any of the above-listed symptoms, it might be time to consider professional treatment. As mentioned earlier in the article, early detection is the key to any disease, and applying that approach to addiction will yield more positive results.

What Is Involved in Vicodin Addiction Treatment?

The first and often most difficult step in the continuum of care is medical detoxification. The purpose of detox is to safely transition into sobriety while removing the toxic substances from the body. 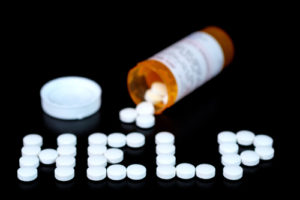 While opioid withdrawal may be as dangerous as that of benzodiazepines or barbiturates, it is often extremely uncomfortable. It has been compared to having the worst flu symptoms imaginable. Due to this, it is important to be in the 24-hour care of medical professionals to monitor your vitals. The length of stay will vary based on the severity of the addiction.

During detox, you will have created a plan to follow moving forward. A team of professional clinicians will have delved into your history and decided which level of care is best for you. This can be either a residential treatment or an outpatient program.

No matter which level of care they decide, you will have access to extensive therapies that focus solely on helping you understand the root of the addiction.

Therapists will teach you healthy coping strategies and ways to manage triggers and temptations. You also will take part in educational workshops that help you achieve skills that will last a lifetime.

These therapies will allow the underlying problems that led you to addiction to be treated. You will create a relapse prevention plan that highlights how you can reach your personal goals and maintain sobriety over time.

How Dangerous Is Vicodin?

Opioids are inherently dangerous when abused, but what makes Vicodin different is how it’s combined with acetaminophen. Vicodin overdoses can result in organ failure due to lack of oxygen, but when taken in excess, it can cause major damage to the liver. It is easier to overdose from acetaminophen than it is from hydrocodone and this can cause serious damage.

According to MedlinePlus.gov, the signs attributed to Vicodin overdose include:

Since its debut, 99 percent of Vicodin and other hydrocodone products are consumed by Americans.