Treating addiction and the various mental health conditions that exist requires a multitude of approaches to find something that works. While one method works for one person, it likely won’t work for another because we’re all wired differently, have different disorders, or are addicted to other different types of drugs or alcohol. Despite the sheer volume of therapeutic approaches, professionals are always looking to find new and effective methods to help people.

One such approach that’s extremely effective is called Rational Emotive Behavior Therapy (REBT) and has become one of the most common psychotherapies to help manage addiction. If you’re one of the millions of American’s grappling with addiction and you’re searching for new ways to overcome it, you’ll want to continue reading and learn how Rational Emotive Behavior Therapy might benefit you.

Let’s take an in-depth look at Rational Emotive Behavior Therapy and what it is.

Rational Emotive Behavior Therapy (REBT) has become an extremely popular and highly effective type of cognitive-behavioral therapy (CBT). It has become one of the most recommended approaches to treat addiction by experts and has a broad category of treatments and techniques. REBT is based on the idea that a person’s behaviors can be altered by changing perception to treat a specific set of symptoms.

In REBT, one of the core philosophies is that circumstances are NOT related to the symptoms someone experiences. How you perceive an event will dictate these symptoms. How you respond to the circumstances in life affects how you experience negative symptoms or positively cope with the challenges you’re up against. When it comes to addiction treatment, triggers and stress aren’t why someone will relapse – it’s the perception of the events and how you cope with them.

REBT is defined by “rational thinking,” and the therapist will assist you in working through the problems by challenging your irrational thoughts. They’ll do this by “promoting” rational thoughts. The central focus of REBT is the idea behind rationality and irrationality, which brings a humanistic approach to the treatment. When you approach therapy in a humanistic fashion, you can focus on improving self-image and self-actualization, meaning that REBT emphasizes positivity and having a positive outlook.

Rational Emotive Behavior Therapy was created by Albert Ellis, who was a prominent psychologist in the ‘50s. The theories are based on central human condition, which means that humans are naturally self-defeating and irrational, so treating cognitive-behavioral issues will challenge the irrational beliefs we carry.

Albert Ellis believes the following are the most common irrational beliefs we hold as people:

The irrational expectations to be perfect led Ellis to believe that therapists must avoid using words like “must” or speaking in absolutes.

One of the primary concepts of REBT is known as the ABC model, which explains that although we blame external events for our unhappiness, it’s our interpretation of the events that are at the core of our psychological distress. ABC refers to the following:

During an REBT session, the therapist will teach you how to incorporate the ABC model into your day-to-day life. If you’re experiencing depression because of a problem in your relationship, the therapist will help you identify the activating event for the issue before encouraging you to figure out the beliefs that caused the negative emotions. After that, you’ll work with them to change these beliefs, then change your emotional response to the conflict.

A vital step in the process is to recognize the core beliefs that caused your psychological distress. In most cases, these are looked at as “absolutes,” such as “I must,” “I should,” “or “I can’t.” The following are the most common irrational beliefs:

Holding onto these irrational beliefs makes it nearly impossible to respond to these stimuli positively or healthy. When you hang onto rigid expectations of yourself and others, you’re going to be disappointed, no matter what. It’ll also lead to anxiety and regret. Letting go of these beliefs will allow you to start living for yourself.

REBT is effective for more than just treating a substance use disorder (SUD); it can help a person manage various psychological disorders and specific behaviors that disrupt a person’s life. REBT can also help with the following:

REBT has also shown to be effective in sports psychology and has been used to help an athlete overcome irrational beliefs that impact their mental health. 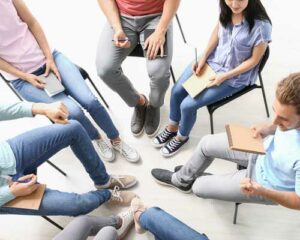 When Ellis developed REBT, his primary objective was to create an action-oriented approach to psychotherapy that produced results of helping people manage cognitions, behaviors, and emotions. Research has proven that REBT is an effective means of changing behaviors and reducing irrational beliefs.

The same positive results we’ve discussed have also been applied to sports psychology, and REBT has been shown to reduce anxiety in athletes and help with irrational beliefs. Generally speaking, REBT offers several behavioral benefits that include the following:

REBT can be applied to various applications, and since it’s focused on education and taking action, it can help with many situations and mental health conditions. It even leads to lasting changes in someone who goes through this type of therapy.

Burnout at Work or School

A 2018 study found that REBT was an effective means of reducing burnout symptoms in undergraduate students and continued alleviating their stress months after therapy finished. REBT has also been proven effective in lowering job-related stress and burnout for nurses. It actually increased their commitment and job satisfaction overall.

For those struggling with anxiety and depression who haven’t found relief through conventional means, the positive effects of REBT will continue lasting after therapy ends. The treatment has also shown promise for young adults struggling with depression because of its emphasis on teaching the following techniques:

The thought of REBT may be overwhelming, especially the prospect of confronting your irrational beliefs. Facing these thought patterns is a challenge because it’s hard to accept them as unhealthy. Starting the process to change your thoughts is even more of a challenge because it forces you to let go of beliefs you’ve held onto your whole life.

REBT is designed to teach you skills you’ll hang onto for life, meaning it’s not a passive process. The sessions will involve homework and other reading assignments, and you will have to step out of your comfort zone to get the benefits from the therapy.

If this sounds like something right for you, check in with your doctor to recommend therapists or mental health professionals that specialize in this approach. Your first session will consist of you discussing your goals with the therapist and what you’d like to accomplish during treatment. This form of therapy is very active and focused, so don’t expect a lot of small talk or casual conversation as the sessions will be very intense