Dependence and Addiction: Is There a Difference?

Addiction and dependence are closely related terms that surround the misuse of drugs and alcohol. They’re often used interchangeably, and they may be treated simultaneously in a rehab setting. However, these similar issues are actually two different things in the world of substance use problems and addiction treatment.

Learn the difference between chemical dependence and addiction and why that distinction matters in treatment.

What is Chemical Dependence?

Chemical dependence refers to chemical changes that occur in your central nervous system after a period of regular drug use or high doses. Your nervous system operates by sending chemical messengers called neurotransmitters that bind to chemical receptors. When specific chemicals bind to their receptors, they activate them, causing their intended effects. Some drugs mimic natural neurotransmitters like opioids,  which mimic endorphins that manage your pain response.

After a while of taking a drug that has these chemical effects, your brain gets used to them and comes to rely on them. To balance brain chemistry, your nervous system may produce less of its own chemicals, relying on the drug you’re putting into your body. This may result in a growing tolerance to the drug, which means you may feel diminished effects from the same dose after consistent use. If you increase your dose to make up for tolerance, chemical dependence will grow.

If you stop taking the drug after developing a chemical dependence, your brain chemistry will become unbalanced, causing uncomfortable physical and psychological symptoms. These symptoms point to a condition called withdrawal.

The severity and risk of withdrawal depend on the type of drug you are dependent on and other factors like your typical dose and the length of time you took the drug. Some withdrawals can be deadly. For instance, central nervous system depressants like alcohol or benzodiazepines can cause life-threatening withdrawal symptoms, including seizures, convulsions, and loss of consciousness.

Other withdrawal periods are not usually deadly, but they can be extremely uncomfortable. Opioids can cause unpleasant flu-like symptoms that cause nausea, vomiting, diarrhea, and sweating. In rare cases, dehydration can be potentially dangerous, but opioid withdrawal more often presents a barrier to sobriety. Since the withdrawal symptoms of drugs like opioids can be so uncomfortable, they’re difficult to get through without returning to drug use.

Dependence is a side effect of many drugs, including prescription substances. If you encounter it while taking a medication, your doctor may be able to help you taper off the drug without experiencing uncomfortable symptoms. Likewise, drug withdrawal after a period of misuse may be treated with tapering medications to avoid dangerous or unpleasant symptoms.

The reward center encourages you to repeat activities that are important to your health and well being. Things like eating, a warm bed, exercise, and a hug from a friend, can all trigger a release of feel-good neurotransmitters like dopamine, serotonin, endorphins, and oxytocin.

These chemicals are closely linked to your mood and energy levels. Unfortunately, drugs and alcohol can manipulate these chemicals in a way that tricks your brain into treating it like a life-sustaining activity. This can cause powerful compulsions to use the drug that gets out of control.

Addiction is often identified by compulsive drug use despite consequences in your life. These consequences can involve health problems, relationship issues, or financial instability. According to the National Institute on Drug Abuse (NIDA), addiction is characterized by the instability it causes in your life. For instance, when drug use causes you to struggle at work, fail to fulfill obligations, or puts a strain on relationships, it points to an addiction.

These issues can complicate addiction treatment. Effective addiction treatment will address physical, psychological, and social health problems through a tailored treatment plan. Addiction is officially diagnosed as a severe substance use disorder in the Diagnostic and Statistical Manual of Mental Disorders, Fifth Edition (DSM-5), and it may be mild, moderate, or severe based on the number of signs and symptoms you have.

Medical and clinical professionals use a set of 11 criteria to determine the severity of a substance use problem. These criteria can include signs of dependence like tolerance and withdrawal. But it can also include psychological and behavioral signs like cravings, interpersonal problems, and hazardous drug use. Severe substance use disorders involve six or more of the criteria. You can also receive a specific diagnosis based on the type of drug you use. For instance, heroin addiction would qualify as an opioid use disorder.

Why Is the Distinction Important? 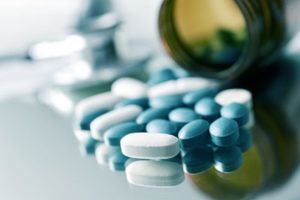 Addiction and chemical dependence are easy to lump together and refer to as synonyms. But there is a significant difference. Both of these issues can be addressed at the same time, but they may be addressed differently. Dependence can be treated with medication, rest, and therapy. There is usually an emphasis on physical symptoms and treatment. Addiction is more complex and may require long term psychotherapy and behavioral therapy.

Addiction usually occurs as a result of substance misuse, which means taking higher doses than recommended, taking drugs not prescribed to you, or using illicit drugs. However, chemical dependence can happen after the normal, prescribed use of a drug as a side effect.

Some drugs can cause chemical dependence without necessarily leading to addiction. This can happen with some prescription drugs, caffeine, and other substances. In such cases, you can speak to your doctor about tapering off the drug or switching medications. When you stop using, you may experience withdrawal symptoms without having compulsive cravings that get out of control.

The common antidepressant class of drugs called selective serotonin reuptake inhibitors (SSRIs) is a good example of drugs that can cause withdrawal without causing addiction. SSRIs can cause discontinuation syndrome, which is characterized by symptoms like dizziness, nausea, irritability, and more. However, SSRIs have a low addiction risk, and it’s unlikely to cause out of control cravings.

Other drugs can cause psychological addiction while having limited physical dependence effects. Marijuana can cause some symptoms of withdrawal, but they are usually psychological. Symptoms can include irritability, trouble sleeping, and trouble focusing. However, your brain chemistry doesn’t adapt to rely on marijuana in the way it would with cocaine, heroin, alcohol, or even nicotine. Still, marijuana can cause psychological addiction, and you may feel like you need to treat stress, relax, or get sleep. Addiction without dependence may be treated with various therapy options.

Addiction without dependence also exists in people in recovery. Addiction is a chronic disease with no known cure. Even people who have been sober for years have to work to safeguard their sobriety. Someone who hasn’t been dependent on a drug for years may experience addiction symptoms like drug cravings or compulsions to use.