Disulfiram Reaction and Side Effects

Though alcohol is legal, widely consumed, and finds its place at the center of many social events, it is also considered the world’s most dangerous drug. In 2019, a committee of British scientists regarded it as such, concluding that alcohol caused more far-reaching damage to the body, psyche, and society than any other substance, outranking heroin, crack cocaine, methamphetamine, and tobacco.

Alcoholism or alcohol use disorder (AUD) damages virtually every part of the body. Thus, a substance as potentially ruinous as alcohol demands a treatment solution that can help people stop drinking.

That’s where a treatment medication like disulfiram comes in. When ingested, it is intended to discourage someone from drinking alcohol. How does it accomplish this? When people take it, it causes them to suffer nausea, headaches, and more. The thinking is that these symptoms are enough to discourage someone from drinking, which is useful when someone has an alcohol use disorder.

But disulfiram can still produce distressing effects, especially when it is taken with alcohol. Read on to learn more about this alcohol treatment medication and its numerous side effects.

Disulfiram is sold under the brand name of Antabuse. The U.S. Food and Drug Administration (FDA) approved it for the treatment of alcoholism in 1951. Actually, two Danish researchers discovered disulfiram by accident in 1947. The researchers were studying compounds that could potentially be used to treat parasitic stomach infections, one of which was disulfiram.

Disulfiram acts to disrupt how the body processes alcohol in the liver. Under normal circumstances, certain enzymes work to break down alcohol into acetaldehyde. Other enzymes break down the acetaldehyde into acetate. Yet, disulfiram blocks the break down of acetaldehyde, which leads to it increasing in the blood. This is what causes the medicine to produce uncomfortable symptoms.

The most serious effects of disulfiram occur when it is used with alcohol present in the body. That’s why if someone agrees to take disulfiram, they must be strong in their commitment to abstain from drinking.

Alcohol and disulfiram don’t mix. At all. When used in combination, they can produce a multitude of effects, which range from moderate to severe. These symptoms persist as long as alcohol is in the body.

Drinking while taking disulfiram can cause the following symptoms, which are considered mild:

The severe reactions that result are life-threatening. These are the potential outcomes from the severe symptoms associated with disulfiram:

When Alcohol Use Disorder (AUD) Is Present 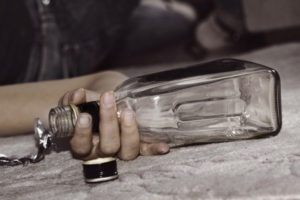 An alcohol use disorder (AUD) diagnosis is established when someone meets certain criteria outlined in the Diagnostic and Statistical Manual of Mental Disorders, Fifth Edition (DSM-5).

The DSM-5 is considered the principal authority on psychiatric diagnoses.

If someone has met two of 11 criteria over 12 months, it means AUD is present.

The severity of the AUD — whether it is considered mild, moderate, or severe —  is determined by the number of the criteria a person meets.

To determine whether you or a loved one has AUD, here are some questions to ask.

In the past year, have you or that person:

If you or a loved one meets one or more of the aforementioned criteria, drinking may already be an issue. The more symptoms someone displays, the more urgent the problem.

When to Consider Disulfiram

If you decide that disulfiram is a viable solution to your AUD, it will require an ironclad commitment to abstain from drinking. You will have to have a serious conversation with a medical professional before considering it.

If you decide to take disulfiram, you have to be at peace with the fact you cannot have alcohol. The deleterious effects of disulfiram and alcohol combined make drinking a dangerous endeavor, resulting in permanent damage or death.

In essence, you should only take disulfiram if you are OK with not drinking for a long time.

How Effective Is Disulfiram?

Disulfiram remains a controversial medication. Many studies show that it produces mixed results when it comes to helping people abstain from alcohol. Disulfiram alone will not prevent you from abusing alcohol, since alcohol is a chronic relapsing disorder of the brain, like other substance addictions.

However, a nine-year German study of disulfiram and a similar drug found that more than 50 percent of the patients who participated exhibited a stronger alcohol abstinence rate.

Why Alcohol Withdrawal Is Dangerous

Because alcohol is one of the most dangerous substances of abuse, it also produces harrowing withdrawal symptoms.

Delirium tremens or DTs is considered the most severe form of alcohol withdrawal, and it can produce life-threatening symptoms, which include:

How Professional Treatment Can Help You

Professional treatment can help by providing you with a medically supervised detox. A licensed and experienced medical staff safely and comfortably removes the alcohol from your body. During this process, staff members administer disulfiram or other treatment medications along with therapy and counseling to treat the underlying causes of your alcoholism.

This approach, which is called medication-assisted treatment (MAT), is proven to effectively treat addictions such as alcohol use disorder.