For as long as we can remember, sleep disorders have been a problem in society. In the 20th century, scientists began to research methods that can effectively treat the problem. There are various issues stemming from an overactive nervous system that include anxiety, insomnia, and seizures. Tens of millions of people are affected by these issues each year, and the search for medications to treat these problems grow more and more as people try to find relief.

Barbiturates are among the oldest forms of modern treatment for sleep disorders and epilepsy. An unfortunate reality left in the wake of barbiturates is their ability to cause chemical dependence and addiction.

Seconal is a barbiturate that is still used rarely in cases of extreme sleep disorders.

It induces sleep, relaxation while providing relief for people with overactive nervous systems. Drugs that work on this part of the brain often result in euphoric side effects. This makes these drugs more likely to be abused.

It was a popular medication in the 1960s before the introduction of benzodiazepines and Z-drugs. Barbiturates have fallen out of the regular rotation among doctors because of the drugs’ addictive factors. Seconal is also sought out by those who use stimulant drugs like cocaine and methamphetamine because of its sedative properties. It allows them to “come down” comfortably and sleep. It is also the drug that is used in the controversial physician-assisted suicide” initiative.

Secobarbital sodium is the active ingredient in Seconal, a barbiturate that came to existence in 1934. It boasts anticonvulsant, anesthetic, anxiolytic (anti-anxiety), sedative, and hypnotic effects. Today, it is used to treat extreme cases of epilepsy and insomnia. In some scenarios, it is used as an anesthetic for short procedures.

Barbiturates are central nervous system depressants (CNS) that work by slowing down an overactive nervous system. Depressant drugs work by increasing the efficiency of a neurotransmitter in our brains called gamma-Aminobutyric acid, which is also known as GABA.

GABA binds to and activates receptors that regulate our nervous system’s excitability. Barbiturates increase these powers that receptors affect, and when a natural neurotransmitter activates it, the potency is increased.

This reaction results in the barbiturates increasing hypnotic, sedative, and anticonvulsant effects of the GABA receptor. Seconal also can slow down other nervous system functions such as your heart rate, breathing, and reaction times. Side effects of barbiturates can make the user feel drowsy, calm and sometimes disassociated, and those under the influence can have impaired motor functions, coordination, and cognitive ability, which makes it extremely risky to operate a motor vehicle or heavy machinery.

Seconal was a highly sought after drug to abuse because of its ability to make the user feel relaxed, content, and feel a sense of euphoria. Using barbiturates for an extended period, however, can lead to physical and psychological addiction. Even when the drugs are used as prescribed for certain disorders, they are only recommended to be used for seven to 10 days. Using barbiturates for more than two weeks can lead to dependence. This can, in turn, make the symptoms of anxiety and insomnia worse.

Over time, these drugs allow your brain to get used to taking them and require continued use to maintain chemical balance. If there is a sudden stop in use, you can experience what is called rebounding, a worsening of the symptoms you initially took the medication to remedy.

What Are the Signs of Seconal Addiction?

Seconal addiction is a serious disease that can be the result of using for too long or recreationally. The longer a drug like Seconal is used, the more likely a dependence or addiction will occur. Addiction is a chronic but progressive disease, and there are several warning signs to let you know that an addiction is developing. If you are using a psychoactive drug for recreational or medicinal purposes, you and your primary care physician should be aware of growing tolerance.

Tolerance is marked as the first sign of a developing substance use disorder, and it is characterized by a diminishing result from the drugs’ initial effect. If you feel that you need to take higher doses more frequently to achieve the same effects as when you begin using, this is indicative that addiction is underway. This most commonly happens from recreational use, but it also can occur with medicinal use.

Continuing to use the drug despite the tolerance can lead to the next phase in substance use disorders. If you cut down on your dose or stop suddenly and feel withdrawal symptoms, this could indicate a developing chemical dependence. During this stage, you may need to continue using the drug just to feel normal. This means you’re no longer taking it to get high; you’re taking it to avoid uncomfortable withdrawal symptoms.

Continued use can eventually lead to an addiction. This is characterized by drug use that continues despite the negative consequences that result. If your drug use leads to your arrest and you continue to use, this indicates that you have an addiction.

If You Are Worried That You or a Loved One Is Developing Seconal Addiction, Some Signs to Look For Include:

If you or a loved one has become addicted to Seconal, it’s imperative to seek treatment immediately. As with any disease, early detection can mean the difference between life or death. Suddenly stopping use of the drug can result in life-threatening withdrawal symptoms.

The Dangers of Seconal Overdose

You’ve likely heard the whispers when it comes to benzodiazepines and potency. While it is correct, barbiturates pose a much greater risk for a fatal overdose. Overdoses can quickly occur when someone abuses barbiturate medication like Seconal. Respiratory depression can be extreme and is the part of Seconal overdose that can lead to death. Symptoms of significant distress can occur anywhere from 15 to 30 minutes after someone has ingested a potentially lethal dose.

In addition to respiratory distress, other signs of an overdose can include being unresponsive, or severe grogginess. The person may find standing up or moving around impossible. They may also experience blurry vision, slurred speech, severe mental confusion, or a loss of consciousness.

If you suspect that you or someone has overdosed on Seconal, you must take immediate action. Call 911 immediately. They can help you perform life-saving tasks before emergency services arrive. The first sign of trouble should warrant a 911 call as these critical minutes could cost someone their lives. 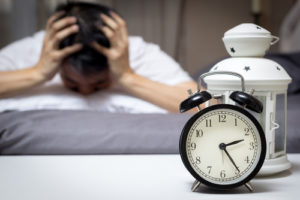 Nearly 45 percent of respondents in a 2012 study by the Sleep Research Society found that they had one mood or anxiety disorder accompanied by insomnia.

Those with two or more such disorders also had insomnia 60 percent of the time. Those with PTSD, which is classified as a stress-related disorder instead of anxiety, 70 percent reported problems with insomnia and other sleep-related issues.

Due to the conditions becoming chronic, sleeplessness will be persistent as well, which can lead to Seconal abuse if the medicine is prescribed. Abuse can occur when someone self-medicates using illicitly bought Seconal.

In some cases, those who become dependent on the drug were recreational users that struggled with addiction to illicit drugs, alcohol, or some other type of prescription medication. Using drugs in conjunction with Seconal is a risk factor for addiction, and mixing drugs can be dangerous leading to overdose if treatment is not sought.

Seconal addiction can be chronic, but it’s treatable with the latest evidence-based therapies designed by addiction specialists. Seconal withdrawal can be extremely dangerous without the supervision of medical professionals. The safest way to transition to sobriety is to complete medical detoxification.

This process involves 24-hour medical care by healthcare professionals who are trained in treating a wide array of symptoms related to substance abuse and addiction. The process can last anywhere from three-to-seven days. The staff could administer medication to mitigate the dangerous symptoms.

After Detox Wraps Up, Recovering Users Can Consider Major Levels of Care, Including:

During addiction treatment, you will sit down with therapists and other clinicians who will go over underlying issues that may be contributing to your addiction. The treatment plan needs to be customized to meet your exact needs. This is the only way it will be effective, and you will attend the therapies best suited for your requirements. This process will allow you to cope with triggers and cravings and create a relapse prevention plan.

How Dangerous Is Seconal?

Barbiturates are dangerous drugs as well as deadly. As highlighted earlier, they are used in physician-assisted suicide cases. Barbiturates at their height were extremely popular, but over time, the adverse effects associated with their use became more prevalent. There are side effects like dizziness, impaired coordination, and drowsiness that leads to accidents and injuries. These are more pronounced with using in conjunction with alcohol, opioids, or other depressants.

Withdrawal is perhaps the most dangerous part with the use of this drug, which can cause seizures or delirium tremens. You must speak with your primary care physician before quitting Seconal.