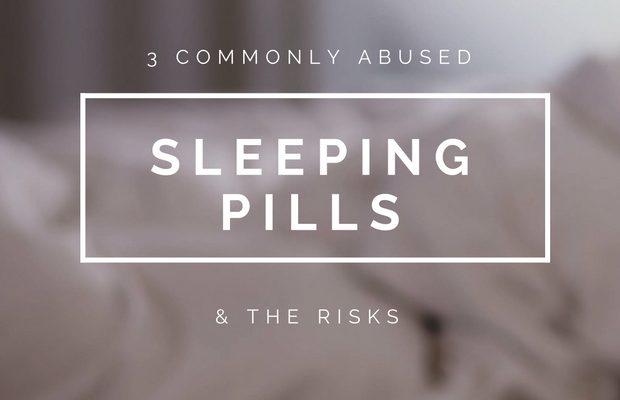 Sleeping pills are one of the most rampantly accessible drugs on today’s market. Most people assume sleeping pills are non-addictive, yet they also report being unable to fall asleep without them. The inability to stop taking sleeping pills, the need to increase dosages over time, and experiencing withdrawal symptoms are all signs of a serious sleeping pill addiction.

Many patients begin taking sleeping pills for legitimate reasons, but soon after, many develop a dependency, increase the dosage, and begin using them recreationally. Knowing which sleeping pills are abused most often and which are the most addictive can help you avoid taking a drug that will cause serious problems in the future.

Many benzodiazepines stay in the system longer than other sleeping pills and can be effective for sleepwalking or night terrors. However, these drugs can also have a hangover effect, making the user feeling groggy the next day. This can make driving or other activities dangerous. They can also cause dependence to such a degree that the user cannot fall asleep without them. Valium is one of the most commonly abused prescription drugs for the feeling of relaxation it gives to users. Valium addictions can cause mood swings, depression, memory issues, and severe withdrawal symptoms.

“Z drugs” encompass the medications zaleplon, zolpidem, and zopiclone. These drugs work well to help a user sleep, but they do not operate as a long-lasting sleep aid. They act in a similar way to benzodiazepines. Z drugs can also cause next-day drowsiness and have on occasion been linked to dangerous sleep behaviors such as sleepwalking, sleep eating, and sleep driving. Z drugs include:

Ambien is a sleep drug often abused for its hypnotic properties. Z drugs largely replaced benzos such as Valium as a short-term insomnia treatment because they are supposed to be “safer.” However, people who take Ambien for longer than recommended or who use the drug recreationally can quickly develop a dependency. Like benzos, Z drugs can cause physical dependence and withdrawal symptoms and are highly addictive.

Over-the-counter (OTC) sleep aids are mostly antihistamines. The active ingredient is one typically associated with allergies and common cold symptoms: antihistamines. These drugs work on the brain the same way as other drugs, but users are technically taking it for its side effect, not its treatment. Its treatment is to fight allergies – drowsiness just happens to be an after-effect. Common OTC sleep remedies used today include:

OTC sleeping pills are not as strong as prescription medications and are not recommended as a long-term sleep aid. The user can experience next-day drowsiness, dizziness, dry mouth, blurred vision, and forgetfulness from OTC sleep aids. It’s easier for many addicts to abuse these drugs since they do not need prescriptions to purchase them.

Preventing And Recovering From A Sleeping Pill Addiction

Being aware of the risk of sleeping pill addiction can prevent this issue before it begins. Most people don’t realize the addictive nature of sleeping pills until they try to stop taking them. They might experience serious withdrawal symptoms or be unable to fall asleep without them. Other signs that usage has crossed the line into addiction include:

Most people addicted to sleeping pills developed the problem after slowly increasing their dosage. Over time, the recommended dosage doesn’t work, so they take more of the pill to get the same effect they did before. Combining sleeping pills with other drugs or alcohol is another common way in which users abuse these drugs. Failing to take sleeping pills as recommended by your doctor can be the beginning stages of a sleeping pill dependency. Overcoming a sleeping pill addiction typically requires help from a professional rehabilitation center.