Have you ever joked about having OCD because you’re clean or like to keep things neat? You might think that because you want to keep things in order or wash your hands several times throughout the day that you might have the condition. However, the term OCD is often thrown around too loosely, and the disorder itself is much more serious than people make it out to be. Obsessive-compulsive disorder (OCD) is an often debilitating condition that can seriously impact the person diagnosed with it, and most people who like to keep their room clean or have some weird quirks aren’t struggling with the condition.

If you’ve been diagnosed with OCD, you’re one of the 2.2 million adults or 1 percent of the population the condition affects. OCD isn’t more prevalent in one gender than another – it affects both men and women equally. The average age of onset is 19, but one-quarter of cases occur by the age of 14. An estimated 33 percent of adults first noticed symptoms in childhood, but it was something that was likely overlooked. Although it’s less common, for those it does affect, life can be miserable.

If you’ve been diagnosed with the condition or believe you might have it, you have probably wondered if obsessive-compulsive disorder is hereditary. How do OCD and genetics play into the disorder? Below, we’ll delve into the facts and gain some clarity about OCD and how it affects us.

What Is Obsessive-Compulsive Disorder? 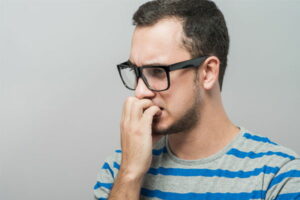 recurring, unwanted thoughts, ideas, and obsessions that push them to do something repeatedly (compulsions). These behaviors include obsessive hand washing, cleaning, or checking on things to ensure they remain the same. Unfortunately, it can severely impact an individual’s daily activities and social interactions.

Although these behaviors can occur in those not diagnosed with OCD, they won’t have the same impact on those diagnosed with the disorder. Someone with OCD knows these behaviors are rigid and persistent and that not giving in to these behaviors will cause them significant stress. Despite knowing these obsessions aren’t realistic, there’s a possibility they could be true, which is why people give in to them.

To earn an OCD diagnosis, the presence of these obsessions or compulsions must be present for more than one hour a day, cause the individual significant stress, and impact their work or social functioning.

While the condition can range from mild to severe, how do genetics play into the disorder?

According to Science Direct, obsessive-compulsive disorder has a clear genetic basis, but scientists are still trying to discover which genes influence the condition. Genetics act as a blueprint for our body that makes different proteins that are used to manufacture a number of tissues and biochemicals. Some people might have different versions of a specific gene. One gene causes some diseases, but various genetics cause other conditions like OCD. When it comes to developing the disorder, it depends on the different versions of genetics you inherited from your parents and in what combination.

Nature vs. Nurture: Environment Plays a Role in OCD

While genetics play a pretty substantial role in whether you develop the disorder, it’s also important to note that your environment strongly influences whether a specific genetic vulnerability can express itself as an illness. For example, if you’re genetically vulnerable to liver disease, you might only develop the condition if you drink heavily or abuse prescription medication that contains NSAIDs. If you’re genetically prone to OCD but you live in a healthy environment, it’s possible that you won’t develop the condition.

According to VeryWellMind, experts now recognize the interactions between genetics and our environment and how it dictates if we develop an illness. They’re quoted as saying that while our genetics “load the gun,” our environment “pulls the trigger.” It’s an interesting yet accurate portrayal of how we can develop a condition like OCD.

If you’re diagnosed with OCD, it’s common that it’s centered around a specific theme. For example, you might have a fear of germs contaminating you. To ease this fear, you’ll compulsively wash your hands to the point that they’re chapped, red, and sore. Many with the disorder are embarrassed and ashamed because they feel like it’s out of their control, but it’s something they developed due to genetics and their environment.

The most common OCD symptoms include:

As mentioned earlier, genetics and environment play a significant role in the development of OCD. However, it’s still misunderstood. The most common theories behind its cause include the following:

Some of the most common risk factors for developing or triggering OCD include the following:

Children and OCD: How to Approach a Child With OCD?

If you believe your child has inherited your OCD, it’s important not to place any blame on yourself. Guilt is entirely unnecessary at this point because many risk factors are associated with OCD. There is no way to prevent a child from developing it. However, treatment exists for you and your child to manage your symptoms and prevent the disorder from significantly impacting your life.

The most crucial step is to get an official diagnosis from a medical professional for your child. Symptoms often go unnoticed in children because of fear and the stigma around their thoughts and actions. If you notice symptoms, it’s imperative that you talk to your child and reassure them that treatment is the best option.

It’s likely you’ve already been on the journey for treatment of your OCD, and you can touch on your experience with your child. If you haven’t, various options are available, such as cognitive behavioral therapy (CBT) and exposure and response prevention (ERP) therapy. ERP is considered the best option for OCD and can help your child learn how to manage their symptoms and cope with the condition in life.

During therapy, a licensed professional will work alongside your child to help them resist their urge to engage in compulsions. Fortunately, as time goes on, your child will learn how to experience their fears and not rely on their compulsions to manage their discomfort.

The most effective treatment for OCD is a combination of cognitive behavioral therapy and medication. In conjunction with serotonin-reuptake inhibitors (SSRIs), exposure and response prevention therapy are the clearest paths toward a normal life. ERP is done by a licensed mental health professional in an outpatient setting. Medications can be prescribed only by a licensed medical professional, who would work together with your therapist to devise a strategy.

While these will help most patients manage their OCD, they won’t help everyone. More intensive options exist, including traditional outpatient treatment, intensive outpatient, day programs, partial hospitalization, and residential and inpatient treatment. These are far more intensive and reserved for those who do not respond to more traditional treatment. If treatment hasn’t worked for you in the past, don’t be discouraged. Please talk with your doctor about what you can do to overcome this disorder and put it in your rearview. They will come up with a treatment option that works best for you.