Psychoactive drugs can dramatically affect the brain. Many common recreational drugs, even alcohol, can affect your perception. Other drugs, like psychedelics, can significantly affect your state of consciousness. But can drugs cause serious mental health issues like schizophrenia?

Learn more about schizophrenia and its relationship to drug use and misuse.

Schizophrenia is a mental disorder in which people perceive reality abnormally. Those with schizophrenia may experience hallucinations, delusions, and extremely disordered thinking and behavior that inhibit regular life. It is a serious condition that requires lifelong care.

Schizophrenia affects an estimated 20 million people globally. Unfortunately, those with the condition are less likely to reach out for help because of the stigma surrounding it. In fact, nearly 70 percent of those who suffer from schizophrenia are not receiving the level of care they need. Instead, many turn to drugs to cope with their symptoms. BMC Psychiatry reports that nearly 11.9 percent of people who have schizophrenia have comorbid drug use disorder, which raises the question, can drugs cause schizophrenia?

What Are the Symptoms of Schizophrenia?

Schizophrenia causes various problems with behavior, thinking, and emotions. Symptoms may vary from one person to another, especially when drugs are involved. The most common schizophrenia symptoms include:

Symptoms vary in severity and type. There may be cycles of intense symptoms, followed by a period of remission. That being said, some symptoms may always be present. This leads us to ask, “what causes schizophrenia?”

Despite years of research, the exact causes of schizophrenia are unknown. Mental health professionals believe that a combination of environmental factors, genetics, and brain chemistry contribute to the condition. Additionally, some risk factors may increase the chances of developing schizophrenia, such as:

Neuroimaging studies have revealed that there is a difference between the brain structure and central nervous system of those with schizophrenia and those without. While researchers are unsure of what causes the differences, this seems to indicate that schizophrenia is a brain disease.

Do Drugs Trigger or Cause Schizophrenia?

Drug usage does not directly cause schizophrenia. However, drug abuse increases the chances of developing schizophrenia and other mental 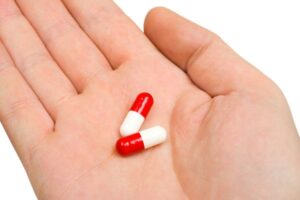 illnesses. Drugs such as amphetamines, LSD, cannabis, and cocaine can trigger schizophrenia symptoms in those who are already susceptible to the condition.

Stimulants like amphetamines or cocaine can lead to psychosis, which causes those recovering from a psychotic episode to relapse. Studies have found that teenagers and young adults who use cannabis are more likely to develop schizophrenia later in life.

The Diagnostic and Statistical Manual of Mental Disorders, Fifth Edition (DSM-5) states that drug-induced psychosis can cause hallucinations or delusions. Hallucinations involve seeing, hearing, or feeling things that aren’t actually there. Delusions are the belief in something untrue.

Research doesn’t indicate that drug use causes schizophrenia in adults. However, substance abuse can trigger schizophrenic episodes in people who have the condition. Schizophrenia can go undiagnosed until the drug-induced episode occurs.

Schizophrenia and Drug Use

As mentioned earlier, drug use or abuse is believed to trigger schizophrenia symptoms in people already susceptible to the condition. For example, substance users being treated for and recovering from schizophrenia may experience a relapse in their symptoms.

However, a relapse or increase in symptoms can occur regardless of whether the person knows they have schizophrenia.

This leads many to believe that drug usage causes schizophrenia. but the reality is that the condition was present all along, albeit with less severe symptoms.

Drugs do not cause schizophrenia. However, they can trigger schizophrenic episodes. People who experience drug-induced psychosis and don’t go on to develop schizophrenia don’t have the same genetic susceptibility to the condition.

Schizophrenia is widely misunderstood and surrounded by stigma. While it can be triggered by drug use, research shows drugs are not the root cause. Those who struggle with it are likely to turn to drugs to cope, causing their symptoms to worsen or return. This is why it is crucial to treat schizophrenia and drug addiction to fully recover.

Do Drugs Cause Psychosis?

Several psychoactive drugs can cause psychosis in some people. These drugs can also cause symptoms similar to schizophrenia and even make existing psychological issues worse.

Some of the most common drugs that contribute to psychosis include:

Depressants, such as benzodiazepines and alcohol, don’t necessarily cause psychotic symptoms when people use them. However, they can lead to depression and make depressive disorders worse. They can also cause delirium and hallucinations during withdrawal.

Once you’ve developed a chemical dependence on depressants, quitting cold turkey can cause dangerous withdrawal symptoms. For example, you may experience delirium tremens, which include heart palpitations and sudden panic, delusions, hallucinations, and confusion.

Stimulants, such as cocaine, meth, and amphetamines, can cause stimulant-induced psychosis. Overusing stimulants can cause psychotic symptoms similar to those seen in schizoaffective disorders. Regular stimulant use can also lead to schizophrenia or chronic psychosis.

Psychedelic drugs such as DMT and LSD can cause intense delusions and hallucinations, as well as other side effects similar to psychotic symptoms. Although they are usually temporary, these symptoms can last for a while.

Schizophrenia has been described as less of a disease and more of a syndrome, which multiple factors can cause, one of which is drug use. Researchers are even starting to examine the effects that psychosis and schizophrenia have on the brain.

Marijuana is unique because it can affect different people differently. Some experience depressive symptoms, while others experience stimulating effects.

Marijuana isn’t commonly associated with psychosis. However, studies have shown it can cause psychosis in certain people, and even worsen the prognosis of people suffering from psychotic disorders.