How to Recover From an Ecstasy Hangover (Tips and Cures)

After a hard night of partying, the day after can be brutal. The morning after using ecstasy will often leave a person feeling extremely apathetic, depressed, lethargic, and depleted or empty.

The ecstasy hangover or comedown is a widespread phenomenon for regular users and people who use the drug for the first time. It is typically used by younger people who find that it increases their sociability, makes them more empathetic or sensitive to others’ feelings, increases their energy, and provides a strong sense of euphoria.

It is not just the actions of the drug ecstasy that lead to the harsh comedown the following day, but many individuals who use ecstasy typically use it with other drugs, particularly alcohol. They often spend the night dancing and partying, very often in social situations where there is quite a crowd.

The crowd often results in the venue being extremely hot. People who use ecstasy already have increased their heartbeat, blood pressure, and body temperature as a result of using the drug. Using the drug in crowded venues where the temperature is high can also lead to dehydration.

The book Ecstasy: The Clinical, Pharmacological and Neurotoxicological Effects of the Drug MDMA describes many of the properties of the drug known to many as ecstasy or Molly. It is a complex drug, technically known as 3,4-methylenedioxymethamphetamine (abbreviated as MDMA), that was initially developed and used in the treatment of individuals who had certain types of mental health disorders. 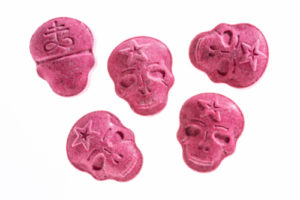 The drug was not believed to be useful in these situations and was eventually discontinued; however, current clinical trials continue to investigate its treatment potential for psychiatric disorders such as post-traumatic stress disorder (PTSD).

When the drug is abused, it produces both stimulant and hallucinogenic effects. MDMA became a popular drug of abuse because it was found that it produced significant euphoria, made people feel more sociable, and also increased their energy levels. The drug became very popular on the nightclub scene with adolescents and young adults, but it has since lost some of its popularity.

It is the mechanism of action of MDMA that is responsible for both its desired effects in those who abuse the drug and the crash or hangover that occurs after the effects begin to wear off.

Once the drug is metabolized in the system, the large amounts of neurotransmitters that were released suddenly become depleted, resulting in a crash that can include severe depression, lack of motivation, a feeling of emptiness (apathy), significant energy loss, lethargy, and even feelings of hopelessness and potential suicidal ideation.

When the drug is combined with other drugs like alcohol that also have the potential to produce hangover-type effects, these effects may be increased.

What Can Be Done to Counter the Effects of an Mdma Hangover?

If a person has already taken the drug and is beginning to feel the effects of the crash the following day, the only sure cure for the hangover associated with MDMA is the passing of time.

For most people, within 10 to 24 hours, the drug will be metabolized to a sufficient point, and the effects will have started to wear off. The resulting depletion of neurotransmitters will slowly be reversed, and the person will gradually begin to feel better within a short period.

The actual time that the hangover effects will take to wear off in any person will be variable depending on the individual, how much of the drug they used, if they combined the drug with other substances, and other factors. Typically, most people will find that the intense discomfort is gone within one to two days. Residual effects may continue for several days.

Some methods might help to counter some of the effects of an ecstasy hangover. Some are listed below.

The last recommendation is actually the best one to avoid experiencing any detrimental effects associated with using MDMA. The best way to avoid an ecstasy hangover is not to use the drug. People who believe they have developed a substance use disorder as a result of their ecstasy use should seek professional treatment.