Ecstasy is one of the most widely known names for 3,4-methylenedioxy-methamphetamine or MDMA. Also, frequently called Molly, MDMA is both a stimulant and a hallucinogen, leading to an intense sense of energy, happiness, well-being, and enjoyment. Textures tend to feel good; lights and colors are brighter; body temperature, heart rate, and blood pressure elevate; and you will feel a sense of trust and compassion for everyone around you. 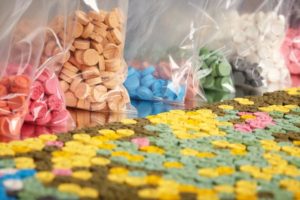 Originally derived from amphetamines and intended to be an appetite suppressant, MDMA picked up popularity as a prescription psychiatric drug in the 1970s. As abuse of the substance spread through the United States in the 1970s and 1980s, the drug was eventually placed on Schedule I by the Drug Enforcement Administration (DEA) in 1988, claiming that it was a dangerous intoxicant and there was no legitimate medical use for ecstasy.

MDMA releases a flood of dopamine and serotonin into the brain, which elevates mood and physical energy for several hours. Neurons become exhausted by this process, however. The comedown or withdrawal effects after taking a dose of ecstasy can last for one to two days.

These effects are very uncomfortable, and they can contribute to mood disorders like depression in people who are at risk of developing these mental illnesses.

To avoid the risks associated with MDMA or ecstasy, several drugs are promoted as safer or natural alternatives to ecstasy. These legal ecstasy, molly, or MDMA alternatives have picked up popularity among those seeking to enjoy an MDMA-like high without the health or legal consequences.

A new herbal supplement that combines several ingredients, this drug is marketed by a supplement company as a safe, euphoric alternative to ecstasy that creates a more controlled high without the crash. Listed ingredients on KATY bottles include:

Marketed as a nootropic, this drug is also specifically advertised as a social enhancer. Online articles laud this drug as beneficial and fun; however, it is new and not well regulated. Many of the listed ingredients may or may not actually be present in the drug. One opinion piece stated concern that Katy is supposed to be refrigerated and that the bottle actually tells consumers to mix it with alcohol for a more intense high.

The supplement has also changed its chemical makeup three times since it was released. These changes were to remove ingredients that had been found to be dangerous, like 5-HTP. It is more likely that this unregulated, little-understood supplement contains dangerous chemicals, which may at least be addictive and could even cause severe reactions or overdose.

This drug has been around in various chemical formulas since the mid-to-late 1990s, when ecstasy abuse was at its peak. The term herbal ecstasy has been used to describe specific supplements, as well as general products believed to contain healthier, natural chemicals that can create sensations like ecstasy without the risks. Early versions of herbal ecstasy contained dangerous chemicals like ephedrine and other unregulated stimulants; modern versions contain chemicals from ginseng, Schisandra fruit, and khat, among other unregulated and potentially dangerous chemicals. MDMA and ecstasy are both dangerous substances, but herbal replacements are not safe either.

This chemical is found in chocolate and cocoa beans, and it is typically associated with feelings of pleasure as it triggers the release of dopamine and serotonin. Studies into PEA’s effects when isolated suggest that it may be able to relieve discomfort or depression in some instances. For example, a study on rats found that this chemical can cause a sensation like a “runner’s high,” or the flood of neurotransmitters associated with elevated mood after exercise. Another study on people with depression found that PEA relieved symptoms in 60 percent of participants.

However, there have been no large-scale medical tests, and PEA is not approved by the U.S. Food and Drug Administration (FDA) as any kind of medical treatment. While it may be found as a dietary supplement, the full effects of the chemical, when isolated or in combination with other unregulated herbs or dietary supplements, is unknown.

This stimulant-like alkaloid chemical has been used in the treatment of asthma, heart failure, stuffy nose, and urinary incontinence. It has also sometimes been used to treat narcolepsy and depression.

While there are still some medical uses for ephedrine-based drugs, they are not the preferred method of treatment for many conditions anymore, as more targeted agonists have become available. Herbal and dietary supplements have been found containing unregulated ephedrine, which is extremely dangerous. The FDA removed most of these and stated that any supplement containing ephedrine is considered adulterated. These stimulant supplements are unsafe for consumption, and they are not an alternative to MDMA.

This is a chemical found in many foods and herbs, but most predominantly in herbal supplements like Ginkgo biloba and St. John’s wort. Buckwheat tea also contains a large amount of this chemical.

Quercetin is an antioxidant and anti-inflammatory chemical. It is promoted to enhance exercise, improve circulation, lower blood pressure and cholesterol, treat gout and diarrhea, and address many other issues. However, there are very few scientific studies suggesting that the stimulating and pain-relieving effects of quercetin actually work on these conditions or that they improve mental clarity, energy, or mood. Like other herbal supplements, this chemical is not known to be safe, and it is not a safe replacement in any way for ecstasy.

This naturally occurring and legal stimulant drug is found in coffee, tea, kola nuts, cacao pods, and several other sources. It can also be found for sale as a powder, capsule, or tablet, which has a large dose of caffeine. It is sometimes found in headache medications, and it is popular in sodas and energy drinks.

While caffeine is rarely dangerous, it is possible to overdose on it in large enough quantities. If you abuse a lot of caffeine, especially as a stimulant and mood-elevating replacement for ecstasy, you are more likely to feel negative side effects such as:

Although countless people all over the world enjoy caffeine, intentional abuse of this drug in patterns similar to ecstasy abuse is dangerous and can lead to severe outcomes.

If you struggle with abuse of ecstasy or MDMA, seeking natural, herbal, or legal alternatives can be dangerous.

Instead, get help from evidence-based detox and rehabilitation programs with addiction specialists who can help you overcome any physical dependence, stabilize your brain chemistry, get appropriate medical diagnoses for mental conditions associated with drug abuse, and change your behaviors around intoxicating substances.