Flakka is a dangerous stimulant that can affect a user for up to several days. Flakka is estimated to be 10 times more potent than Ritalin, a prescription stimulant, during the reuptake process of dopamine. Recent studies have compared the differences between the effects of flakka and bath salts, which revealed similar traits regarding potency.

Not surprising from the studies, however, is that the drugs produce equal rates of dependence following the continued use. This drug has gained popularity in states such as Florida, Texas, and Ohio, and can be detrimental to those using and for anyone around it. This is due to the disturbing and often violent behavior that can result after use.

Flakka is in a class of drugs known as cathinones, which are naturally occurring alkaloids found in shrubs. Its chemical structure is α-Pyrrolidinopentiophenone or α-PVP for short. Designer drugs like flakka are created in labs for the intended purpose of mimicking the effects of stimulants like cocaine or MDMA.

Synthetic replacements to these illegal drugs are at the forefront of dealers priorities because the drugs are technically legal. These are traded on what is called the gray market.

These drugs are unknown by legislation and are not illegal to purchase. They are illegal to be sold, but those who do sell these products market the items as plant food or bath salts. The U.S. government classified α-PVP as a Schedule I drug when the drug started to sell on the streets. The problem, however, is that with a tweak of the chromosomes, the new product is not illegal. This is what makes the drugs more dangerous because you can never be sure about what’s in it before consuming it.

Flakka has been called the “zombie drug” because of the effects it has on its user. It creates jerk movements, paranoia, bizarre behavior, and, in some cases, rage. Those who ingest high doses of the drug can experience their muscle fibers dissolving into their bloodstream. This results in uncontrollable movement, a staggered gait, and panic. There are often powerful hallucinations that can be associated with the high, and disturbing delusions that can activate fight-or-flight responses. 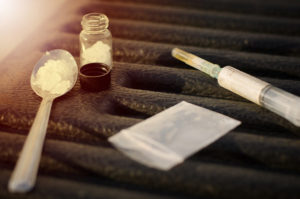 Flakka is said to have originated in South Florida and is one of the newer chemicals on the designer drug scene. An emergency room doctor describes flakka and flakka-like drugs as “five dollar insanity.” Another director of a rehab center called it the “devil’s drug.” It is a synthetic crystal imported from China that is cheap, addictive, and terrifying.  Law enforcement officers have described nightmare scenes where the individuals who ingested flakka were running naked into traffic or impaling themselves onto fences. These types of drugs are just so dangerous because they’re highly unpredictable.

Due to the disturbing nature of the high produced by flakka,  police need at least three or four officers to respond to calls involving flakka.  Violence often happens in conjunction of use.

How Does Flakka Work?

Flakka is still a relatively unknown substance with little research, but it is still a drug that can result in addiction. Due to its undesirable effects, it is thought of as less likely to be addictive. Though, some have suggested that flakka can be even more addictive than methamphetamine.

Some traits are shared between these drugs. Flakka is a norepinephrine-dopamine reuptake inhibitor meaning that it stops the body’s natural process of removing chemicals from the system like dopamine. Dopamine regulates excitement and energy in the body, and flakka causes a buildup of this chemical, which can result in feelings of panic, anxiety, and paranoia. It’s so powerful, in fact, that it can cause delusions and hallucinations.

Since it works like cocaine and meth, it can be addictive when used regularly. As mentioned earlier, the effects for most are too unpleasant to continue using. In fact, using a second or third time is actually very rare. Abuse and addiction are still a threat.

What Are the Signs of Flakka Addiction?

Earlier stages of substance abuse are much more difficult to spot. This is because brain chemistry has not yet been altered, but it will become more apparent over time that addiction is becoming a real problem in someone’s life. There are signs in the early stage of flakka addiction that are easy to identify.

Drugs such as flakka are powerful stimulants that make it harder to hide from people as highlighted by the stories mentioned above.

Signs That Someone Has Used Flakka Include:

If you have been using flakka and are concerned about an impending addiction, the first sign to check for is a growing drug tolerance. Tolerance is when the brain and body get used to the drug throughout use. If the doses begin to feel weaker than when you started taking the drug, and you require a higher dose to compensate, this means the body has adapted to flakka. If you continue to use the drug, you run the risk of creating chemical dependency.

What a chemical dependency indicates is that your body will rely on the drug to maintain normalcy. Upon stopping the drug, this could create withdrawal symptoms that cause psychological and physical discomfort. Stimulants affect mood and energy in the body, and some symptoms include irritability, depression, suicidal thoughts, mood swings, insomnia, seizures, and heart arrhythmia.

Another reason flakka is dangerous is because of its adverse effects on one’s health. It can create heart problems and complications during use and withdrawal. Stimulants increase the heart’s rhythm, and powerful stimulants have a dramatic effect. If you have been using flakka and notice abnormal heart palpitations or an irregular heart rhythm, you must immediately speak to a medical professional.

The final stage of a substance use disorder is addiction. Addiction is characterized as the compulsive use of a drug despite the serious consequences. This can mean legal troubles, a job loss, or health problems.

What Is Involved In Flakka Addiction Treatment?

Addiction treatment consists of assessing and treating a person’s medical, psychological, and social needs that have been altered by addiction. This is done with sole purpose of achieving long-term sobriety and recovering from a substance use disorder. The first step when you enter treatment is medical detoxification. During this process, you will go through an intake and assessment to identify your most pressing issues or medical needs. If you do have medical needs that are related or not related to withdrawal, you must attend medical detox.

During detox, you will be surrounded by medical staff for 24 hours a day that monitors your health. This can last up to a week but could be longer depending on circumstances. Detox works well for people who have withdrawal symptoms and other urgent medical needs and will allow for a more comfortable transition back to stability. When the team determines the drugs have left your system and you’re stable, you will move to the next level of care.

During your assessment the addiction specialists will have examined your history of drug use and relapse, the severity of your addiction, and if you have a healthy living environment. This will determine where you’re placed. They may see residential treatment being a better fit which would have you living on-site for up to 90 days. If they find you to be a low risk, you will be placed in an outpatient program that will allow you to go home after the completion of therapy. You will be required to submit to regular drug tests.

Upon completion of treatment, the facility could offer an aftercare program. This will connect you to resources and sponsors that will continue to aid in the maintenance of your sobriety. Addiction is a life-long disease that requires attention.

Get Help Today for Your Flakka Addiction

Flakka addiction is a serious disease that can have lasting effects. If you or someone you know is experiencing difficulty from an addiction, seeking out a treatment center that offers the highest level of care is a must.