Is Heroin Really Addictive? (What the Science Shows)

Heroin is an illicit drug with an incredibly high potential for abuse and addiction. It is considered one of the most addictive drugs used recreationally.

According to the National Institute on Drug Abuse (NIDA), heroin is an opioid drug that is made from morphine. Morphine is a naturally occurring substance that is derived from the seeds of the poppy plant, an exotic plant that is primarily found in Asia, Mexico, and Columbia.

Typically, heroin comes in a brown or white powdered form, or as a sticky black substance known as black tar heroin.

There are several ways to use heroin. Users can inject it, snort it, or smoke it to get the effects.

Some users mix heroin with crack or powdered cocaine in what is known as a speedball. This dangerous combination produces both stimulant and depressant effects.

Heroin has both short-term and long-term biological effects. Short-term effects of heroin use include the following:

Those who use heroin consistently on a long-term basis may experience the following:

Heroin is often mixed with other substances, such as powdered milk, starch, and sugar, to stretch it so dealers can turn a higher profit. These additives can clog blood vessels, leading to issues with circulation. This can cause permanent damage to the brain, lungs, liver, and kidneys. 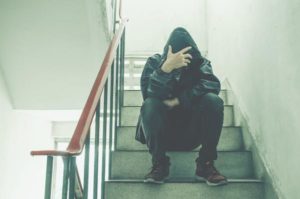 According to the National Institute on Drug Abuse (NIDA), in 2016, nearly 948,000 Americans reported using heroin in the past year.

The most susceptible age group appears to be adults between the ages of 18 and 25. This group has the largest number of new users each year

Despite rising rates overall, the study found a declining rate of new heroin use among adolescents ages 12 to 17.

Heroin use is no longer relegated to predominantly urban areas. Many suburban and rural communities around the United States have been ravaged by both heroin and prescription painkiller abuse.

How Addictive Is Heroin?

Some people wonder whether the stigma surrounding heroin is valid. After all, heroin essentially comes from a flower.

The reality is that heroin is an extremely addictive and dangerous drug. According to The New York Times, overdoses have passed both car crashes and gun violence to become the leading cause of death for people under the age of 55 in the U.S.

Heroin addiction can develop quickly in some circumstances, but on average, it takes several uses for it to become habit-forming.

Essentially, it starts to take more and more doses of heroin to achieve the same initial effect as the first use. Tolerance to a drug is one of the early indications of a step toward addiction.

According to the National Survey on Drug Use and Health, 5.1 million people reported using heroin in 2015. The number of deaths from a heroin overdose was six times higher in 2015 than it was in 2002.

While the science behind addiction is not fully understood, heroin’s effect on chemical pathways in the brain appear to be part of what causes tolerance to develop.

Heroin works by disrupting certain natural processes in the brain. These processes become reliant on heroin to function. At a certain point, an individual loses control over how much and how often they use, which is the definition of addiction.

Extended heroin use can cause an individual to be unable to experience pleasure without the drug. This is due to damage to the neurotransmitters and systems in the brain that deal with this feeling. The end result of this damage is often depression and/or anxiety when the drug is not present.

Why Are Opioids So Addictive?

According to an article from Mayo Clinic, anyone who takes an opioid — whether for the first or hundredth time — is at risk of developing an addiction.

Opioids work by triggering endorphins in the brain. Endorphins are known for dulling and reducing pain while strongly boosting pleasurable feelings and a sense of euphoria and well-being.

Because this effect is temporary with the use of opioids like heroin, once the feeling wears off, a user will likely want to get those feelings back as soon as possible. This is the formative stage of addiction.

With extended opioid use, the brain slowly reduces the number of endorphins that are naturally produced.

At the same time, the body develops a tolerance, so it takes increasingly higher doses of opioids to produce the same effects. The person’s body becomes accustomed to the presence of opioids. When they are not present, they go into withdrawal.

Heroin is a powerful and very addictive substance that can be very harmful.

Many people start by abusing prescription painkillers. When they are no longer able to get these drugs, they turn to heroin, which is often cheaper and easier to obtain.

To stay safe and prevent addiction, only use prescription painkillers exactly as prescribed. Do not raise the dose,  do not take the drug more frequently, do not alter the standard method of use, or combine these drugs with any other substances like alcohol.

Any use of heroin is considered abuse since it is an illegal drug. Even one use of heroin can start a cycle of use that can quickly lead to addiction.