Tramadol: How Addictive Is It? (Prescribed & Recreational)

Tramadol is an opioid, and it can only be used with a prescription from a doctor.

MedlinePlus states that tramadol can be habit-forming. The risk of dependency and misuse goes up with long-term use. Chronic use can lead to addiction.

Pain is a public health concern that requires additional research and attention.

In September 2018, the U.S. National Institutes of Health published a report stating that up to 20 percent of Americans report feeling chronic pain.

In response to this health epidemic, pharmacists, doctors, and other experts have done whatever they can to soothe patients who truly need help. Though there are many ways to deal with chronic pain, opioids such as tramadol have been a lifeline for many who deal with debilitating chronic pain.

Despite its possible risks, the Substance Abuse and Mental Health Services Administration (SAMHSA) says prescriptions of tramadol rose 88 percent between 2008 to 2013. This was an increase from 23.2 million to 43.8 million prescriptions, respectively.

SAMHSA reports that the U.S. Drug Enforcement Administration (DEA) has been concerned about this increase in prescriptions of tramadol since 2011. More prescriptions make it easier for the public to get their hands on the drug, sometimes unintentionally.

Dependence With Medical Use

According to the Mayo Clinic, using opioids for any time period could lead to addiction. Various factors can make it easier for someone to depend on opioids and increase their odds of misusing them.

Opioids work by releasing endorphins — chemical messengers that produce a sense of well-being. Endorphins change the way the body perceives pain. Their invigorating feelings make it hard for people to deal with pain after their dose of opioids starts wearing off.

It is normal for patients to want to feel better, but the desire for a return of these good feelings is usually the first step toward abuse. Regularly taking opioids also leads to tolerance, and this encourages a person to take doses that are higher than prescribed.

As with other opioids, patients should not quit tramadol cold turkey. Instead, they should discuss their concerns with their doctor.

Depending on the level of use, the doctor may recommend a tapering schedule to stop taking the medication slowly.

Tramadol is sold as a capsule, tablet, and extended-release tablet. Regardless of how it is taken, it works by blocking the reabsorption of two key chemical messengers: norepinephrine and serotonin. These neurotransmitters are known to induce relaxation.

A person begins to feel relief about an hour after taking the medication, and the feelings may last at least two hours more.

While tramadol is active, a person’s digestive system works more slowly, and this may cause constipation. There are other side effects.

The medication should only be used as directed. People should never crush or chew tablets or capsules. They should also never take more than what their doctor has instructed.

Who Is Addicted to Tramadol? 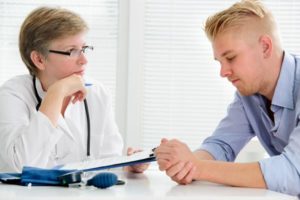 An exact number of people who are misusing tramadol is hard to come by, but SAMHSA relays the following statistics relating to tramadol and emergency room visits:

NIDA provides a few illuminating statistics about the opioid crisis in general.

As stated by NIDA, opioid overdoses are now considered a national crisis, with opioids of all kinds involved in the deaths of 130 Americans per day.

Along with tobacco, alcohol, and certain illicit drugs, prescription opioids are some of the most commonly abused drugs in the United States today.

Eventually, opioids cause the body to reduce their production of feel-good hormones such as norepinephrine and serotonin. Patients may be tempted to increase the dose they take on their own. They may ask their doctor to renew their prescription or authorize a refill.

Doctors know the risks of opioid dependency, tolerance, and misuse. A patient’s regular physician might deny their request.

Misuse may cause a patient to exhibit normal signs of addiction, such as doctor shopping, or searching for another physician who will give them an additional tramadol prescription.

As mentioned by NIDA, using opioids on a long-term basis can change the brain, affecting the reward center. Drugs cause a person to decrease their output of feel-good hormones on their own. After a while, the body will rely on the drug to function.

A person then stops being able to feel pleasure from activities they enjoyed in the past. Now, their brain only rewards them when they are using drugs. It is normal for a person to want to feel good, and they may change their habits to support their drug dependency.

Other risk factors for becoming addicted to tramadol are:

Women are also at higher risk of becoming addicted to opioids, as they are more likely to deal with chronic pain.

The Mayo Clinic states that some people who become addicted to opioids may decide to buy tablets or pills from online sellers or even dealers on the street. This puts them at risk of using counterfeit drugs or contaminated tramadol.

A fake tramadol pill may be cut with toxic substances or more potent drugs, such as fentanyl. This means the user has no idea what they are taking, and this could rapidly lead to overdose and even death.

A few steps can be taken to prevent tramadol misuse.

If you notice that you are becoming tolerant of tramadol, discuss this with your doctor.

Quitting tramadol cold turkey is dangerous, but your doctor may put you on a tapering schedule. This allows you to reduce your intake of tramadol without experiencing uncomfortable withdrawal symptoms. Your doctor may also discuss alternative pain management methods with you.

If you have been abusing tramadol, comprehensive addiction treatment is recommended. Otherwise, relapse back to substance abuse is likely.