Inhalant abuse is often referred to as volatile substance abuse, solvent abuse, sniffing, huffing, and bagging. This is the deliberate act of inhaling a volatile substance to achieve an altered mental state. Inhalant abuse is a problem in the United States,  and it is actually a global issue, too. It is more common in minority and marginalized populations and often affects younger children when compared to other forms of substance abuse. Those who chronically abuse inhalants are often met with serious and irreversible effects.

Inhalants are sought out due to their low cost and easy access. These drugs can produce an intense euphoric high. The National Institute on Drug Abuse (NIDA) released a report about its users that shows that 9.8 percent of adults ages 18-25 most commonly engage in inhalant use. Other reports show that 10th-graders (6.1 percent) regularly experiment with inhalants as well. When students enter the eighth grade, a staggering 1 in 5 of their classmates will have already experimented with deadly inhalant drugs.

Inhalants include aerosols, solvents, and nitrates, among others. While inhalant addiction is less common, it has been depicted in history for centuries dating back to Babylonian times. Inhalant use gained popularity in the United States during the alcohol Prohibition period in the U.S. This was used as a substitute for alcohol as a means to “catch a buzz.” It wasn’t until later, however, that abuse of the drugs was popularized.

It is a less common problem in most of our communities, but that does not mean our children or young adults will not be exposed at some point or another. If there are five children in a room going into the eighth grade, statistics point to one of them having tried inhalants. This may not develop into a substance use disorder, but inhalants are extremely dangerous and could result in fatalities after a single use. This means more information must be available for parents to talk with their children and inform them of the dangers of inhalants.

The unfortunate reality is that while not all who try it will become addicted, there are some who will fall into the grips of addiction. Inhalants can be purchased at gas stations, tobacco stores, and even convenience stores, which raise the level of concern. There need to be more efforts into regulating inhalants, and more information about inhalant addiction, which will be discussed below.

What Are Inhalants? How Are They Misused? 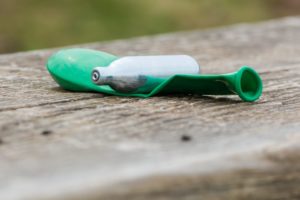 There are a variety of meanings when it comes to inhalant, but when referring to inhalant addiction, it means the inhalation of a solvent or other material that produces vapors users inhale to get high. These can be found in many household products that serve their purpose at home.

Inhalants contain 1,1-Difluoroethane, which is a colorless gas found in aerosol products such as cleaning aerosols and cleaning sprays. Dust-Off is one of the brand name inhalants most commonly abused. It is bought legally in most office supply and hardware stores in the United States.

Unfortunately, they can carry a high risk of abuse. The National Inhalant Prevention Coalition shows that children quickly discover that these household products are not only inexpensive to buy but very easy to hide. The most common inhalants are paint and glue, but there can be thousands of household chemicals that can be abused.

Inhalants have the ability to produce psychoactive and mind-altering effects that can cause just as severe side effects that include apathy, belligerence, impaired functions, vomiting, nausea, and dizziness. It is a very intense intoxication that can cause the user to have trouble completing simple tasks such as walking.

The leading cause of death from using inhalants is the trauma that can result after consumption. Gases are cold, and inhaling these can result in freezing the lungs. This is why if you’ve seen someone use inhalants, their lips turn blue due to oxygen deprivation. The leading cause of death, however, is falls caused by losing consciousness. This can also lead to seizures, or something called Sudden Sniffing Death Syndrome.

Most Common Inhalants Include:

Inhalant use results in a high that is associated with euphoria stemming from the central nervous system (CNS). Inhalant abuse affects many areas of the brain, but as the high fades, it acts as a depressant. It’s a short high that requires the individual to continue redosing so they can achieve their desired level of intoxication.

Constant inhalant use causes extreme dizziness by starving the brain of oxygen, and this causes what is called brain fog. Due to this, it runs the risk of severe health problems when motor skills are affected in this dramatic fashion. When the user continues to inhale the substance, it can cause aggression and possible hallucinations. This puts not only the user in harm’s way but anyone around them as well. These hallucinations can transport someone into an alternate existence, causing them to exhibit strange behaviors and acts that could kill them.

Inhalants affect the brain like other depressants and drugs by activating dopamine in the system. This is the body’s natural pleasure center. The difference between inhalants and other drugs, though, is how deadly it can be after a single use. While other drugs may require several uses to become fatal, inhalants can kill you even after trying it for the first time. Brain damage is also linked to long-term use. To avoid these problems and reduce any damage to the body, it is important to seek help immediately if you suspect a growing substance use disorder from inhalant use.

What Are the Effects of Inhalant Abuse?

Children are drawn to inhalants because it is harder to detect when the substances are being abused. Fortunately, if you are familiar with the signs of inhalant abuse, there will be outward signs that you can recognize.

For those who develop an addiction to inhalants, the drug will become the center of their universe. The signs will become easier to identify.

Some Behaviors of Long-Term Inhalant Users Include:

Early detection is key to preventing damage and saving someone’s life. If you suspect your loved one is becoming dependent on inhalants, seeking treatment can help them on their road to recovery.

While there is no cure for addiction, there are treatments available that can guide someone in the process of rebuilding their lives. The purpose of treatment is to establish tools and manage triggers outside the walls of treatment. Although the client may feel the urge to return to using, rigorous therapy sessions in treatment will allow stabilization of the mind to fight the battle of addiction.

Most addiction centers do not specialize in inhalant abuse, but there are some that are equipped with the proper tools and specialists to deal with inhalant addiction. The National Inhalant Prevention Coalition has noted in its studies that most chronic inhalant users will be given a dual diagnosis of chemical dependency and mental illness.

The client must complete an extensive assessment that will discuss complications and their health conditions before they can enter treatment. This includes the central nervous system, kidney and liver irregularity, lead poisoning, heart and lung distress, and nutritional problems that could arise from their drug abuse. Once this wraps up, the client will learn how these chemicals are stored in fatty tissues of the body, and there will be residual effects for quite some time after drug use is stopped. This will result in extra time spent in a residential treatment center.

During their time in treatment, clients will work with counselors to create treatment plans. This will involve support groups, extensive therapy sessions, and methods to treat their mental health disorders that contributed to using in the first place.