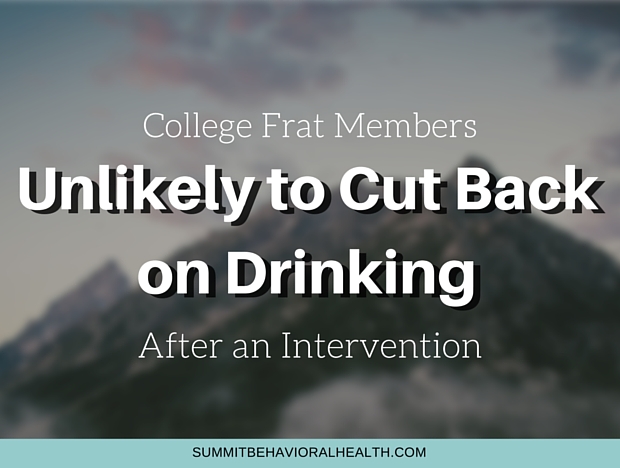 A recent study suggests that members of a college fraternity who drink to excess are unlikely to change their behavior, even in light of evidence-based methods of curbing alcohol abuse. Even interventions with high efficacy have little effect on frat brothers, according to the study, published in the journal Health Psychology in May.

The findings were surprising, said Lori Scott-Sheldon, associate professor at Brown University Medical School and senior scientist at Miriam Hospital, who was the lead author. She noted that since these types of interventions work well in the general student population, she thought the same would apply to Greek letter organizations. In an organization that endorses alcohol use, this may be harder, she said in a recent interview with NBC News.

Fraternities are notorious for promoting an atmosphere of heavy alcohol consumption. Poor decisions made due to intoxication frequently make headlines on campus papers, but recent studies suggest something even more alarming: The glorification of these practices makes traditional interventions challenging.

Considering the success of films such as “Neighbors,” “Old School” and “Animal House,” society seems to give a pass to the alcohol-driven antics of college boys, which may be one of the reasons interventions seem ineffective within this specific demographic.

Scott-Sheldon and her team of researchers sought to discover if interventions conducted over the course of 25 years had proven effective at curbing alcohol use among Greek letter organizations. The group conducted a meta-analysis of 15 studies using 21 different intervention methods, covering a total of 6,026 participants. Eighteen percent of these were women, who were excluded from final results.

Scott-Sheldon’s team found no significant difference between fraternity members who received intervention treatment and those who did not. In fact, alcohol use increased after some interventions.

The Studies Her Team Reviewed Used Varied Measures, Such As:

Alcohol use is more or less of a rite of passage among college students in the United States, but even more so in fraternities and sororities. Members of Greek systems tend to drink more alcohol, and in higher quantities, than the general college population.

They also report more adverse consequences from drinking than others do. Similar meta-analyses of a general college population suggest that interventions are helpful in curbing alcohol use, so Scott-Sheldon’s findings were unexpected.

The Brown University professor said in a press release by the American Psychological Association that she expected giving Greek members, particularly fraternity brothers, access to thoughtfully designed interventions would reduce overall consumption. She said she also assumed interventions would cut down the number of binge-drinking episodes.

Instead, the opposite seems to be true. Changing patterns in behavior among this population could prove harder than that of the general student population, because Greek life often considers alcohol use – and how well it is tolerated – a central part of its social mores.

Alcohol and Fraternities: Framing the Problem

Over the years, rituals, cloaked in secrecy, have grown in these organizations. Hazing as well as dangerous alcohol abuse are often rites of passage in the initiation process, leading vulnerable individuals into harm’s way.

Consider the story of Nicholas Holt, 18, who was a freshman at Stony Brook University when members of his fraternity, Alpha Phi Delta, delivered him to a local emergency room. Tests revealed that he had copious amounts of alcohol in his system. After a five-day fight for his life, he died, leaving a community reeling. Unfortunately, Holt’s story isn’t uncommon.

Members of fraternity houses are more likely to boast of frequent drinking, consume more per drinking episode, and experience more adverse consequences than the general student population is.

Concerns about student safety have led to sanctions by national chapters, yet nothing seems to curb alcohol use behind fraternity house doors.

Researchers have traced alcohol misuse and abuse among Greek letter organizations to several determinants. First is the self-selection of students into groups who share their values. In other words, students who misuse alcohol are more likely to align themselves with peer groups who act in kind.

Second, socialization plays a role. Pledges are encouraged to drink and eventually rewarded, increasing the likelihood that they’ll adopt abusive behaviors to gain approval. Third, Greek housing provides an enabling environment in which members are drawn to drink alcohol.

Which Interventions Exist to Curb Alcohol Use?

Some current evidence-based interventions appear effective in curbing alcohol use in the general college population. Interventions vary in scope, but among students, they tend to produce “strong and enduring reductions in alcohol use.”

Older narrative reviews of the literature surrounding the Greek population are mixed. Some researchers have found that alcohol interventions are not efficacious among fraternity brothers, while others have maintained that they can be successful in curbing drinking when the social approval of drinking is minimized.

In light of a lack of recent meta-analyses, Scott-Sheldon and her research team sought to update the narrative and provide a more comprehensive view of interventions within this population.

Scott-Sheldon and her team hypothesized that, based on previous research:

Scott-Sheldon deemed studies eligible for inclusion if they:

The authors excluded studies that focused on campus-wide efforts (structural level) or those that addressed combined abuse (alcohol and tobacco, or alcohol and other illicit substances).

Scott-Sheldon searched for studies using electronic databases (PubMed, PsycINFO, ProQuest, CINAHL, ERIC), databases of funded research (NIH, ClinicalTrials.gov), and the reference sections of relevant articles. Out of the 345 studies returned, the authors deemed 15 suitable for inclusion, based on their outlined criteria.

The 15 studies examined were published between 1987 and 2014. Population samples were recruited from large public universities across the U.S., and 18 percent of the 8,299 total study participants were women. Most participants (89 percent) were white and had an average age of 20 years. Studies retained an average of 73% of the original population sample at follow-up.

Most of the studies rooted their interventions in behavior change theories (such as the social norms theory). Interventions were most often delivered in a single session, though the range was from one to 28 sessions.

They Used a Combination of Strategies:

Interventions were most often delivered at a sample level, meaning they were generalized to the group rather than tailored to an individual recipient.

Scott-Sheldon’s meta-analysis revealed that relative to the control condition, Greek life members who participated in these interventions drank no less and did not report fewer alcohol-related problems. However, it appeared that providing these interventions consistently did have a modest effect on reducing drinking over time.

Analysis also revealed that some measures were actually counterproductive. For example, highlighting situational risk factors seemed to increase drinking incidence. This may be explained by the fact members of the Greek system are more likely to see alcohol as a means to achieve their sexual and social goals.

What Does This Mean For the Future of College Alcohol Intervention Programs?

The authors also suggested that including Greek leaders in the intervention development process may also prove fruitful. The Association of Fraternity and Sorority Advisors seems ready to accept the challenge.

Changing the Culture of Greek Drinking

In an interview with NBC News, Mark Koepsell, the association’s executive director and CEO, explained that successfully changing the Greek culture requires a systemic approach. He called for a robust infrastructure that would support Greek populations, moving beyond program-focused measures and building a system of support within the college campus itself.

Some campuses are leading the charge in creating interventions that are for and by the populations they aim to help. The University of Pennsylvania has developed an alcohol policy committee that features members of local sororities and fraternities. Since the institution implemented the committee, it has not experienced the same magnitude of serious problems, according to Dr. Charles O’Brien, professor of psychiatry and director of the Center for the Studies of Addiction at the Perelman School of Medicine.

This isn’t the first study that Scott-Sheldon has done that supports the notion of changing alcohol expectancies among college students. In 2012, her research found that challenging a student’s beliefs about the rewards of drinking can actually reduce 1) overall consumption of alcohol and 2) the frequency of binge-drinking episodes.

Scott-Sheldon said those findings reinforced the notion that drinking habits can be influenced by what people expect to happen when they imbibe alcohol. If, for example, a student believes that drinking will give him or her more courage or make them more likeable, he or she will be more likely to heavily drink based on that expectation.

If, Scott-Sheldon continued, campus staff can convince students that these positive effects of alcohol are based on their expectations, not actually as a result of consumption, they can reduce the number of binge-drinking episodes as well as overall consumption. The number of accidents and other negative consequences associated with underage alcohol consumption could decrease as well.

What Can Change For Fraternities and Alcohol Use?

Researchers need to conduct more-detailed analyses of current intervention techniques and discover ways to change alcohol expectancies within the fraternity population. Alcohol plays a central role in the development of social mores for Greek letter organizations, which isn’t the case for most other demographics. Therefore, interventions will have to address the culture of Greek life itself.

The future of alcohol-related interventions is not hopeless, contrary to what the study seems to purport. Scott-Sheldon suggested that researchers will simply have to develop new interventions specifically tailored to this distinct population.

Encouraging organizational change through member participation and involvement of key stakeholders will continue to be integral to the success of future intervention programs. Colleges should also look to programs such as the University of Pennsylvania’s and follow its example to form their own campus and Greek house interventions.