Does Methocarbamol Show Up on a Drug Test?

People who are recovering from an injury or surgery may be prescribed methocarbamol, a muscle relaxant used to treat pain or tension. The medication is also used to treat patients who may be experiencing skeletal muscle spasms or short-term pain, including post-surgery discomfort.

Methocarbamol, perhaps more widely known by its brand name Robaxin, is usually prescribed as part of a recovery plan that requires physical therapy and rest. The drug depresses the central nervous system and blocks the brain from receiving sensations of pain that are felt throughout the body.

Intravenous administration, which usually takes place in a clinical setting, provides the most immediate relief. However, methocarbamol can be taken as either a 500-milligram (mg) or a 750-milligram tablet that is available only through a doctor’s prescription. Either way, patients who take it legally do so under the care of a physician, who will determine the proper dosage after reviewing the patient’s medical condition and response to treatment, as WebMD advises.

People who take methocarbamol must use the medication as their doctor directed. Patients may find that they need to reduce their dose after two to three days into their treatment program. However, this reduction must also be made under a doctor’s instruction.

Side effects may occur with methocarbamol therapy, which includes drowsiness and dizziness. This means users should avoid doing any activity that requires alertness, such as driving or operating machinery. These side effects make some people think that methocarbamol is a narcotic.

Narcotics are also known as opioid medications that are used to treat severe, short-term pain. This class of drugs includes codeine, fentanyl, hydrocodone, morphine, oxycodone, tramadol, and many others.

All of these medications are controlled substances in the United States because their abuse and addiction potential are high. However, the opposite is true of methocarbamol despite its powerful side effects. It is not a controlled substance in the U.S, and its potential for abuse and addiction are considered low. It is not a narcotic because it doesn’t relieve generalized pain, Healthline says, and it doesn’t produce euphoric highs. This still doesn’t mean people can’t abuse it.

Will A Drug Test Detect My Methocarbamol Use? 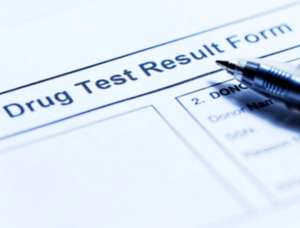 The first thing to know is that not all drug tests are the same. Standard drug tests serve various purposes, and they can be used to screen for different substances. Depending on the test used, a person may need to submit a urine, saliva, blood, or hair sample. Also, depending on the sample, the test can determine how long and how much someone has used a substance. A urine drug test is more commonly used because the detection window for use is longer, and overall, it is seen as less invasive.

Standard drug tests can detect whether certain drugs are present in the body and in what amounts. It can trace controlled substances that are known to have high abuse potential as well as if extensive drug use or misuse is the case. These tests can look for the use of benzodiazepines, opioids, and other prescription medications as well as illegal substances, such as cocaine and methamphetamines, and marijuana.

Muscle relaxers such as methocarbamol, do not fall into any of these categories of drugs. Therefore, it’s unlikely that evidence of their use will show up on a drug test. Still, people who misuse or abuse this medication could run into serious problems.

If someone has used too much of the drug, the body can’t process it properly, and this can create a buildup of the substance in the body. This is also dangerous because a person can enter into a state of extreme drowsiness that may be hard to wake from, and this can lead to a loss of consciousness. Using other substances with methocarbamol, such as alcohol, also a central nervous depressant, can end a fatal overdose. Other signs of an overdose include:

Call 911 for immediate medical care if this happens.

Don’t Mix Methocarbamol With Other Drugs

Methocarbamol should not be taken with other drugs, as it can interact unfavorably with these substances:

If you are taking this medication, it helps to know its half-life, which is the time it takes for the drug to be reduced by half in the bloodstream. According to Drugs.com, methocarbamol’s half-life is between one and two hours in healthy patients, which is short. It exits the body through the urine. Senior-age adults and people with illnesses of the kidneys and liver may find it takes longer for the medication to exit the body.

Taking methocarbamol in high dosages is likely to make you ill and put you on a path to substance abuse. It isn’t addictive in the same sense as other substances, but dependence on it can grow the longer it is used. If someone has abused substances in the past, then the person could do the same with this medicine.

If you find that you or your loved one can’t stop misusing or abusing methocarbamol, it’s time to seek help. Consider getting help at a professional facility that treats substance use disorders. Enrolling in a recovery program at a licensed facility has helped many people stop using substances, address their addictions, and find sobriety along with an enriching and full life.