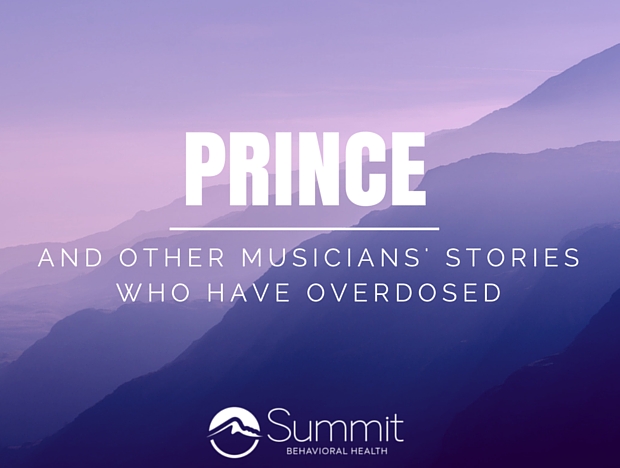 In April, the world was shocked to hear of Prince’s death. Many have been left wondering how someone who seemingly had it all could succumb to an opioid addiction. In the case of Prince, the specific drug was fentanyl, a painkiller that is approximately 80 times more potent than morphine and according to CNN Health, can be up to 50 times more powerful than heroin.

Sadly, Prince is not the only tragic story of a musician overdosing on drugs or alcohol. Some of the greatest musicians, as well as actors and other artists, have suffered similar fates. It’s not completely understood why those who are highly creative are prone to drug and alcohol abuse. Often, there is a complex set of circumstances that led to the problem.

In the case of Prince, he suffered from hip pain for decades which led to his use of painkillers. It still hasn’t been completely determined what role his personal physician had in the development of the addiction, but clearly there was not ample supervision of his condition. Prince also suffered personal loss in the form of divorce and the passing of his newborn baby in the late 1990s. It is unknown whether Prince may have also had co-existing disorders such as anxiety or depression which often go hand-in-hand with addiction. However, he certainly did not get the help he needed for his lethal addiction to opioid painkillers.

The Stories Of Musicians Who Suffered Overdoses

The list of musicians who have lost their lives because of addiction is long. Certainly some names on the list quickly come to mind. Michael Jackson died in 2009 from an overdose of benzodiazepine and propofol. Like Prince, Jackson also endured years of chronic pain from injury and had taken painkillers for an extended period of time.

Nearly 40 years earlier, the world of music was rocked by the untimely overdose death of Elvis Presley. With an extended history of medical problems and abusing barbiturates and Demerol, Elvis suffered a slow, steady demise in the 1970s that ultimately resulted in him dying in 1977. The autopsy and follow-up lab reports showed that 14 different drugs were found in Elvis’ system at the time of death. His doctor was charged and later exonerated of criminal liability in the singer’s death despite the fact that he was prescribed more than 10,000 doses of sedatives, amphetamines and narcotics in the months leading up to his death. The doctor was only suspended for three months, but was eventually found guilty of over-prescribing in a later case and had his license revoked.

There is an eerie fact that a number of top musicians have died at the age of 27. This is referred to as the “27 club,” and many of the individuals in the “club” have tragic stories of drug or alcohol abuse. Between 1969 and 1971, Brian Jones of the Rolling Stones, Jimi Hendrix, Janis Joplin and Jim Morrison all passed at the age of 27 with drugs or alcohol being a primary factor in their deaths. Two and a half decades later, Kurt Cobain, the lead singer, guitarist and primary songwriter of Nirvana, joined the club. In 2011, singer Amy Winehouse also died at 27, increasing media attention of the 27 club.

While the 27 Club is certainly an unusual coincidence, it also draws attention to the fact that drugs and alcohol can quickly take the lives of individuals who are in the prime of their lives.

Overdose Across All Walks Of Life

In 2014, there were nearly 19,000 deaths involving prescription opioids in the United States, according to the National Center for Health Statistics.

Deaths involving synthetic opioids, like fentanyl, increased 79 percent from 2013 to 2014.

Why the sudden increase? Illicit opioid formulations are hitting the streets in much greater numbers. The Drug Enforcement Administration (DEA) has seen a tremendous surge in fentanyl seizures. Often, these drugs are laced with heroin or vice versa, making for an even more powerful high. They are also more dangerous, leading to a growing number of overdose deaths, including that of Prince.

An Expert Weighs In On The Connection Between Celebrities And Overdose

It can be difficult to understand why such talented individuals like Michael Jackson, Kurt Cobain or Amy Winehouse would spiral out-of-control because of drugs or alcohol. To help provide some insight into the cycle of addiction and how it can happen to celebrities and others, our very own Chief Clinical Officer, Maria Ulmer, was asked to provide us some answers to common questions about addiction.

Q: Why are celebrities at a heightened risk of addiction and overdose?

A: Unfortunately, celebrities are often prone to the tragedy of drug overdose or death as a result of drug induced complications (accident while intoxicated or [when] mixing several substances) – which often is unintentional.

Many factors relate to the frequent occurrences amongst celebrities:

Stress – Those in the limelight often face extreme stress and pressure as they try to manage the demands of the celebrity lifestyle. Being in the public eye can take a toll on a person’s self-esteem which can lead to negative outcomes. Many have a difficult time dealing with this lifestyle and the expectations of conforming to a certain stereotype or label. This often leads to unhealthy addictive coping patterns such as using alcohol, drugs, food, shopping or sex as a means to escape or numb the stress.

Accessibility – Celebrities can easily access alcohol and drugs whether during parties or special events or having social resources available to them. They can also financially afford the costly habit of substance use and the ongoing supply to feed the habit.

Q: What type of treatments do you think that someone with that status should turn to for their ailments when struggling?

A: It is critical for individuals struggling with stress to find healthy coping strategies: develop a positive support system, practice self-care through healthy diet and exercise, practice mediation and mindfulness exercises, maintain regular sleep (8-10hrs/night), find fun activities that allow you to decompress, and maintaining a consistent daily routine that keeps in balance work and home life. Often medical issues, mental health conditions, (and/or) substance use issues develop when individuals struggle to keep balance in day-to-day living with the demands of the stressful expectations of the celebrity spotlight.

Q: If a celebrity/high profile individual approached you, what kind of accommodations or unique programs would you be able to offer?

A: We offer several different levels of care to accommodate a variety of addictive disorders at varying symptoms of severity – detox, residential, partial care, intensive outpatient, outpatient treatment. We specialize in treating the individual within an integrative approach – mind, body, spirit – personalized treatment options provided by a multidisciplinary team of licensed professionals.

Q: Where do you see the opioid epidemic going? / What direction regarding doctors prescribing, new laws and treatment opportunities and the turn to heroin?

A: Access to prescribed pain meds and heroin has led to this fatal epidemic in our communities. Federal and local initiatives are actively being pursued to address this public health problem. Prescribing laws and regulations are beginning to be enforced and closely monitored to prevent over prescribing. The use and over the counter access of Narcan is saving lives every day. Treatment providers are faced with a chronic disease of opioid dependence that is not easily combated with typical treatment approaches. It is vital that new and innovative strategies be employed to stop this epidemic: medication assisted treatment options (Vivitrol, Suboxone, Methadone), Extensive and Long Term Residential TX, involvement of the family, use of holistic/alternative modalities (recovery yoga, massage, acupuncture, hypnotherapy, brainspotting), and an integrative approach of medical-clinical-holistic.

Share this candid article with your loved ones and colleagues. You never know who may be struggling in silence.

Don’t Wait Another Day To Get Help

Prince’s story is especially tragic because he was likely searching for help. Unfortunately, it was too late. If you are struggling with addiction, don’t take a “wait and see” attitude about your problem. Recovery is possible, and it starts by asking for help.

Call Summit Behavioral Health To Speak With An Addiction Specialist. We Will Help You Take That First Step To Hope And Healing.