Heroin is an opioid that’s used only as a non-prescribed drug in the United States. In fact, illicit heroin and its wide availability are major factors in the current opioid epidemic. According to the National Institute on Drug Abuse (NIDA), 15,482 people experienced fatal overdoses involving heroin in 2017.

Heroin is notoriously addictive, and it can be extremely difficult to break out of a severe heroin use disorder, especially on your own. Learn more about heroin addiction and how it can be effectively treated.

Learning about heroin addiction and treatment may be the first step toward recovery.

Heroin, also called diamorphine, is a psychoactive drug that’s in the opioid family. Today, it’s primarily used as a recreational drug in the United States.

Heroin is derived from opium poppy plants, and it’s many times more powerful than morphine. It was first synthesized by combining naturally occurring morphine with other chemicals to create a new, more powerful compound.

Though it is sometimes used in other countries for medical purposes, it’s considered a Schedule I drug in the U.S., which means it doesn’t have any currently accepted medical uses and has a high potential for abuse and addiction. According to the National Institute on Drug Abuse (NIDA), heroin is highly addictive and can lead to tolerance and addiction when used regularly.

Heroin works by rapidly binding to opioid receptors in your brain and activating them. These receptors are designed to bind with a chemical called endorphins, which is a natural opioid that is normally found in the human body. 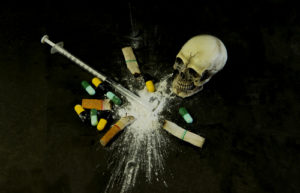 When the receptor is activated, it triggers pain relief and rewarding effects that can help regulate your body’s pain response. However, heroin is more potent than your natural endorphins. It can cause profound feelings of euphoria, sedation, and relaxation.

Repeated heroin use can cause the reward system to treat heroin like it is as vital as food and water. This leads to compulsive use and addiction.

What Are the Signs of Heroin Addiction?

Addiction is a severe substance use disorder, according to the Diagnostic and Statistical Manual of Mental Disorders (DSM–5). As a chronic disease, it can be difficult to overcome without help. However, it can be treated. Catching heroin addiction early can help to avoid some of the most serious consequences such as infectious diseases, overdose, financial ruin, and broken relationships.

Some of the More Common Signs of Heroin Use and Addiction Are:

What Is Involved in Heroin Addiction Treatment?

Heroin addiction treatment will be a personalized treatment process that’s based on your medical, psychological, and social needs. If you have a high-level medical needs, or if you are likely to go through uncomfortable withdrawal symptoms, you may start with medical detox.

Detox involves 24-hour addiction treatment services and medical care daily. Detox typically lasts for about a week. While it’s an important step in treatment for people with medical needs, it’s usually not enough to treat people with deeper needs.

After you complete detox, you may go through an inpatient program if you still have ongoing medical or psychological needs that require a high level of care. Inpatient treatment involves 24-hour, medical monitoring, or clinically managed care.

Addiction treatment can involve various kinds of therapies, including individual, group, and family therapy. The therapy options you go through will depend on your specific needs.

How to ID Heroin

For instance, you may go through a unique treatment plan that’s designed to address anxiety, trauma, depression, or any other substance use problem you may have.

Behavioral therapies are common, and cognitive behavioral therapy (CBT) is one of the most popular treatment options when it comes to addiction. CBT is an important tool in relapse prevention. It involves identifying triggers that can lead one to use again and learning how to cope with them effectively.

Do I Need Detox?

Heroin withdrawal symptoms aren’t typically life-threatening, but they can be extremely uncomfortable. Some people describe them as the worst flu they’d ever experienced. Common symptoms can include fever, body aches, nausea, vomiting, and sweating.

Opioid withdrawal can be potentially dangerous if the symptoms lead to complications like the aspiration of vomit or dehydration. Deaths from opioid withdrawal typically involve situations of neglect in prisons.

Still, the safest way to go through heroin withdrawal is in a medical detox program. Detox can help you to avoid potentially dangerous complications and ease uncomfortable symptoms. Plus, opioid withdrawals can come with powerful drug cravings.

Compulsions to use mixed with uncomfortable symptoms can make it especially difficult to resist a relapse when you are going through treatment on your own. Detox services can help guide you through withdrawal and offer accountability to help keep you from relapse.