Why Heroin Causes Constipation (& What to Do About it)

While the country is currently in the midst of an opioid crisis of epic proportions, drugs like heroin have caused devastation around the country. Current statistics paint the picture of 130 deaths to American citizens every day from an opioid overdose.

From 1999 to 2017, more than 700,000 people have died from a drug overdose, and 70,200 drug overdose deaths in 2017 involved an opioid. As of 2017, the number of overdose deaths involving opioids (including prescription opioids and illegal opioids, such as heroin and illicitly manufactured fentanyl), was six times higher than in 1999.

The numbers speak for themselves, and the wave that has swept over our nation has no signs of washing away anytime soon. While we understand that drugs like heroin can kill you, other symptoms such as constipation are lesser-known side effects that do occur.

From 1999 to 2017, nearly 400,000 people died as a result of an overdose caused by opiate drugs, and the rise of overdose deaths can be outlined in three distinct waves.

Our government has done a great job to curb this epidemic, and while recent statistics have not been tallied for total deaths, preliminary reports are showing we are starting to make a difference in the fight against opioids. Eighty percent of the heroin users surveyed mentioned that they started using prescription drugs prior to their heroin use.

Once the government became more strict about prescribing guidelines, those abusing the system were left to get their drugs from the streets. With prescription drugs costing such a high amount on the black market, it’s extremely common for users to turn to heroin as a more cost-effective alternative. If a drug can give you more intense euphoria for a fraction of the price, it makes perfect sense in the mind of someone addicted to drugs.

While we hear about the side effects heroin provides such as euphoria and slowed breathing; constipation is not something that is talked about very often when you think of heroin abuse. Constipation occurs in virtually anyone who abuses the drug, and it can be very uncomfortable if someone has not made a bowel movement in several days. The question is, why does heroin cause constipation, and what can be done to fix it?

WebMD defines constipation as it being difficult to have a bowel movement, or happening less often than usual. Almost everyone goes through it at some point, and it’s seldom serious. The average length of time between bowel movements varies widely from one person to another, and some will have them three times a day, whereas others a few times a week. Going longer than three days without one, however, is usually too long. After three days, the stool gets harder and more challenging to pass.

Heroin and opioid-induced constipation can be uncomfortable, but it can also be dangerous. Symptoms include hard and dry stools, and the need to force or exert extreme effort when trying to use the bathroom, the decreased urge to defecate, pain, cramping, and distended stomach can all occur.

Due to heroin causing constipation, individuals will seek relief through remedies that help the problem, but the only action you can take that will solve the problem is to stop using heroin.

Why Does Heroin Cause Constipation? 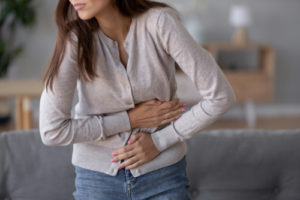 Using heroin can also create specific types of contractions in the small intestine while decreasing other intestinal contractions, which will alter how the food moves through the digestive system.

In addition to what we’ve listed above as reasons for constipation, heroin also reduces the functionality of the autonomic nervous system, which can cause paralysis of certain areas in the stomach.

The condition is referred to as gastroparesis. Heroin suppresses the functionality of the sphincter muscles as well, and stool does not pass through easily. The intestines can potentially absorb too much water, which can also increase the risk of constipation.

Is There Heroin Constipation Relief?

Constipation is common even in those who do not consume opioids, and remedies and relief can come in the form of supplements, medications, and simple alterations to your diet to include more fiber and water. The solutions, however, may not always work for heroin constipation. The reason there are few heroin constipation relief options is that opioids alter how the intestines function. Some prescriptions can provide relief, but most heroin users are not going to their doctor to obtain prescription constipation medicine.

Call Serenity at Summit Today For Help With a Heroin Addiction

Heroin addiction is a serious disease that can have grave consequences and can be uncomfortable during its course. Fortunately, it is a treatable disease with advances in modern addiction treatment. The hardest part should be admitting to the problem and overcoming it, not choosing a treatment center.

If you or a loved one is battling heroin addiction and is always constipated, they must seek treatment immediately. Our addiction specialists at Serenity at Summit are ready to listen to your story today. Feel free to give us a call 855-956-4940 or contact us online to learn more about how we can help.