The Dangers of Mixing Halcion and Alcohol

The primary danger of mixing Halcion and alcohol lies in the way each drug enhances the effects of the other, leading to the potential for overdose, damage to numerous organs, and physical dependence.

Halcion (triazolam) is a member of the benzodiazepines, a large group of medications designed to replace barbiturates as treatments for clinically significant anxiety and seizure disorders. Benzodiazepines are designed to be used as sedatives.

What Is Halcion Intended For?

Halcion is primarily used as a sleep aid, particularly one that induces sleep.

It is designed for individuals who have trouble falling asleep or for those who can stay asleep once the drug helps them fall asleep. The drug has a quick onset of action and a very short half-life.

It is not designed for long-term control of anxiety, sedation, or to control potential seizures. Instead, it is designed to induce relaxation quickly and effectively.

Prescription sleep aids like Halcion should be used for a couple of weeks maximum and on a temporary basis only. This is because taking this drug on a regular basis will cause someone to develop significant tolerance to the drug, requiring higher and higher doses to experience the same effects.

Other interventions, such as organizing your sleep schedule or therapy to assist with relaxation and sleep, should be used in conjunction with Halcion.

All benzodiazepines, including Halcion, are controlled substances.

Because Halcion has the significant potential to reduce tolerance and, with extended use, lead to physical dependence with withdrawal symptoms, it is classified by the U.S. Drug Enforcement Administration (DEA) in the Schedule IV category of controlled substances. 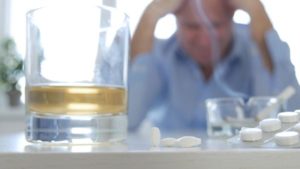 The most common drugs abused with benzodiazepine include prescription painkillers, alcohol, and other benzodiazepines. In some cases, individuals will mix stimulants with this classification of drugs or even illicit drugs, like heroin.

Those who abuse all different types of substances will commonly use them in conjunction with alcohol.

Alcohol is also a  central nervous system (CNS) depressant drug. When an individual mixes a benzodiazepine like Halcion and alcohol, the effects of both substances are significantly increased.

This means that taking a smaller amount of either drug can produce significant effects when these drugs are taken together.

Mixing alcohol and Halcion can lead to serious consequences.

Consequences of Mixing Halcion and Alcohol

The dangers of mixing benzodiazepines and alcohol have long been recognized.

Mixing alcohol and Halcion is dangerous due to the effects of both drugs being enhanced when combined. This can lead to:

Parasomnias are very rare behaviors that can occur in individuals who use sleep aids like benzodiazepines.

Parasomnias are behaviors that typically occur when a person is awake but instead occur when the person is sleeping. The person often has no memory of what was performed when they were asleep.

Blackouts occur when an individual is awake and under the influence of some drug or medication, such as alcohol. In this case, the individual might engage in various behaviors but have no memory of performing the behaviors later on.

Combining benzodiazepines like Halcion and alcohol raises the risk for parasomnias and/or blackouts.

Physical Dependence on Benzodiazepines and Alcohol

Chronic use of alcohol or benzodiazepines can lead to significant physical dependence.

The withdrawal symptoms associated with physical dependence on alcohol or benzodiazepines include life-threatening seizures.

Seizures occur when there is unrestrained activity in a particular portion of the brain, leading to convulsions or other detrimental behaviors that an individual cannot control. 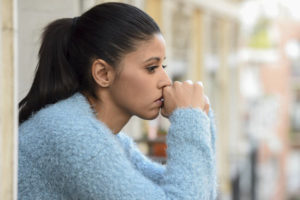 Seizures can lead to significant brain damage and even fatalities if left untreated.

The potential seriousness of the withdrawal syndrome from either drug is great for individuals who have developed a physical dependence on either drug. They need to be placed in a supervised medical detox program. They should not attempt to get through the withdrawal process without medical supervision.

Any person who regularly combines Halcion and alcohol is abusing both drugs. The instructions on the medication clearly state that Halcion should not be used in conjunction with alcohol.

Any person who uses Halcion without a prescription is considered to be abusing the drug. Other signs of abuse include:

Individuals who combine Halcion and alcohol regularly are abusing these substances.

For someone who has combined these two on just a few occasions, the opportunity to discontinue use on their own is possible.

For anyone who has combined drugs and misused them for more than a few months, there may be a need for professional intervention.

Anyone who has abused Halcion and alcohol should discuss their situation with a licensed mental health care professional to identify the best course of action to reduce the misuse of these drugs.