When you think of cocaine, your first thought may be Pablo Escobar. In the ‘80s, the drug lord pumped hundreds of tons of cocaine into the United States. It became one of the most widespread drugs, infecting party scenes like Miami’s and turning them into war zones. For many decades now, the drug has been at the forefront of devastation worldwide. What’s strange is that people complain about how severe the cocaine hangover is and how bad it is to come down from it, but they try it or go back for more anyway.

Unfortunately, many people who use cocaine today report it being laced with fentanyl, adding to the inherent dangers of using the drug. Fentanyl can lead to an immediate overdose that often turns fatal. In the previous 12 months, an estimated 81,000 drug overdose deaths occurred in the United States, caused by the COVID-19 pandemic. In that span, overdose deaths involving cocaine increased by a staggering 26.5 percent, according to the U.S. Centers for Disease Control and Prevention (CDC). The increase in overdose deaths is quite concerning.

You should know some things about cocaine hangovers and how to safely recover when you’re coming down from cocaine. A cocaine comedown has been described as one of the “roughest rides” you’ll go through in your lifetime. It’s better to call it a crash that will have you regretting your decision to use the drug. If you’re wondering what a cocaine comedown is, let’s delve a little deeper.

Cocaine, sometimes referred to by its street name coke, yay, or blow, in its natural form, is derived from the coca plant. However, it’s commonly mixed with cutting agents to increase the drug’s weight to help dealers make more money. It can be any powdery white substance that stretches the amount further. These cutting agents are what makes the drug so dangerous and unpredictable. For that reason, staying away from cocaine would be your best option to avoid a comedown or the potential fentanyl contamination.

In some cases, cocaine is a drug doctors prescribe to treat ailments like depression and other health issues. It’s also sometimes used during surgery. It may be most popular for being an ingredient in Coca-Cola, which was replaced by caffeine due to concerns. Now, it’s mostly sold as an illicit drug on the black market, leading to addiction and other issues.

Cocaine is a government-controlled substance. As such, it’s extremely addictive and may cause life-threatening overdoses. The comedown from cocaine refers to the feelings a person experiences when the effects of the drug wear off, which can range from mild to severe. It depends on how much cocaine was consumed. For example, if you did a little, your comedown won’t be as bad as someone who stayed up all night binging on the drug.

A person will typically avoid the comedown by continuing to use more of the drug. Even if they run out, they’ll do what it takes to get more, even if it means stealing money from friends or driving impaired. Driving under the influence of drugs brings its own risks, especially when the individual mixes cocaine with another depressant like alcohol. 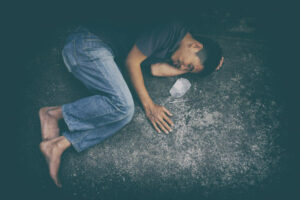 Getting over the effects of a cocaine comedown can leave residual impacts in the form of a hangover. How long does that last? Well, a cocaine hangover can last for several days, while a comedown will go away sooner. When cocaine is used alongside other substances like alcohol or other drugs, it will increase the severity and cause it to last longer.

If you’re out partying with friends, you may not pay much attention to what you’re putting in your body. When mixing cocaine with alcohol, you can form something known as cocaethylene in your blood. This condition can lead to potential seizures, liver damage, and other severe health risks. You should never mix drugs and avoid using them altogether.

Someone who’s never used cocaine before or someone who used cocaine heavily will experience a hangover. They’re more likely to have a worse hangover from a batch that was mixed with a dangerous cutting agent. There are a few tips if you’re going through a cocaine hangover and want to get better, including the following:

The aftereffects of cocaine will likely leave you feeling exhausted. You’ll experience mental, physical, and emotional fatigue after a cocaine binge. The best thing you can do for yourself is to recover and rest. Treat yourself to something healthy and comforting to overcome the worst of these aftereffects. However, the only real cocaine hangover cure is to abstain from the drug entirely.

Physical Aftereffects of a Cocaine Hangover

Cocaine is a drug that’s hard on every part of your body. Even in its purest form, it can still cause great harm to your mental, physical, and emotional health with prolonged use. The following are the most common physical effects you’ll endure after a night of cocaine use.

A cocaine comedown can make you feel terrible and cause significant emotional issues.

What Are the Symptoms of a Cocaine Binge?

The effects of cocaine hit the brain rapidly and could initiate after ingesting your first dose. Since it’s metabolized fast, the drug’s effects wear off in an hour, leading to an immediate comedown. This is one reason a person will continue using the drug and go on a binge. They’ll continue using it to avoid feeling depressed or sluggish.

A cocaine binge includes symptoms such as:

Taking a single dose of cocaine may cause some of these symptoms, but it’s not likely to cause confusion, delusions, and hallucinations unless it’s a really high dose. However, taking multiple doses in a row can increase your risk of stimulant-induced psychosis, a condition that causes schizophrenia-like symptoms in people who take stimulant drugs. A cocaine binge can also cause you to remain awake for days. Sleeplessness mixed with high doses of stimulants can affect your brain, causing a temporary break from reality.

Stimulant-caused psychotic symptoms are usually temporary and will go away as the drug wears off. However, if you have a history of mental health issues like schizophrenia, it may trigger longer-lasting psychosis.

How Long Does a Cocaine Comedown Last?

After taking cocaine, the cocaine comedown can last several hours. The drug’s euphoric effects are fleeting, lasting a few minutes, depending on how you take it. Smoking crack cocaine may offer an even shorter high. After that, the drug will remain active in your system, but some of the pleasurable effects will have worn off. Acute effects like high energy, anxiety, paranoia, jitteriness, and insomnia. In some cases, lingering stimulating effects will last up to two hours.

As the drug is wearing off, you will start to feel symptoms like fatigue and depression. The length of time the coke comedown lasts will depend on how much you took and how many doses you took. A single dose of cocaine may cause fatigue and a foggy head for 12 hours or more. A cocaine binge can cause uncomfortable comedown symptoms that last for days, which may include hypersomnia.

How Long Is the Cocaine Withdrawal Period?

The length of time it takes for you to get through cocaine withdrawal will depend on several personal variables. One of the most significant factors is how long you were dependent on cocaine. Cocaine dependence can develop quickly, and it’s what causes you to experience uncomfortable side effects when you stop using the drug. The longer you were in active cocaine addiction, the more your body will have grown used to the drug.

The cocaine withdrawal timeline will also be affected by the dose of the drug you are used to. If you’ve gotten used to a high dose, your body will have adapted to a large amount of cocaine in your system. This means it may take more time for you to get through the withdrawal phase. Withdrawal symptoms may also be more intense and appear quickly.

Getting Help for Cocaine Addiction

If you’ve been using cocaine for a long time and you’re tired of these comedowns and hangovers, help is available. At a certain point, you can’t help but use cocaine if you’ve become addicted. You may be tired of the hangovers. They could even be unbearable, but because you’ve developed a substance use disorder (SUD), you can’t help yourself.