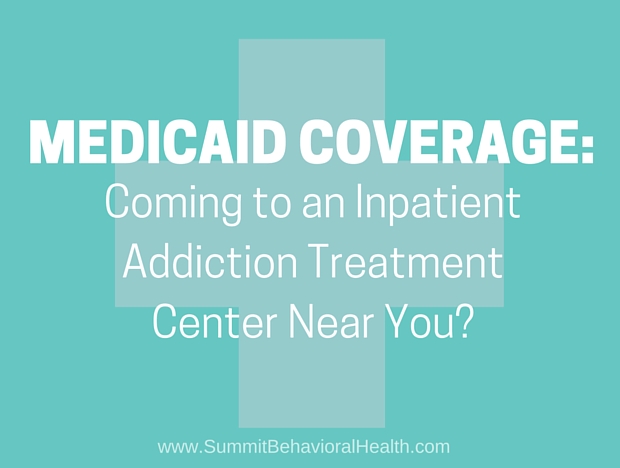 For years, low-income individuals have relied on state and local sources to seek addiction treatment. Now, thanks to a recent federal proposal, families with few financial resources can get the help they need. If this proposal goes through, Medicaid, funded by the Department of Health and Human Services, may channel federal dollars into addiction treatment options.

The Centers for Medicare and Medicaid Services recently sought the funds to provide patients with 15 days of inpatient rehabilitation services. The move is an attempt to draw more states into Medicaid expansion. To date, 30 states have accepted Medicaid expansion. Federal officials in favor of the proposal emphasize the role Medicaid could play in helping people recover from opioid abuse and mental health issues.

THE NEED FOR MORE-ACCESSIBLE ADDICTION TREATMENT

The Centers for Medicare and Medicaid’s proposal comes on the heels of the Centers for Disease Control and Prevention’s (CDC) new guidelines for prescribing opioids for chronic pain, a document in which the nation’s top health agency calls opioid abuse an epidemic.

According to a report by the CDC, more people died of drug-related overdoses in 2014 than in any other year ever recorded. Nearly two-thirds of these deaths involved an opioid, including heroin. Since 1999, overdose deaths involving an opiate have quadrupled.

Other statistics worth noting, via the CDC:

THE SCOPE OF THE PROBLEM

Given the scope of the problem, federal officials are wooing states into accepting Medicaid expansion by covering inpatient drug rehabilitation and detox. The program targets low-income uninsured individuals and families. According to a report by the Department of Health and Human Services, an estimated 2 million low-income people who suffer from a substance abuse problems or other mental health disorders reside in the 20 states that have not accepted the Medicaid expansion.

Sylvia Mathews Burwell, secretary of HHS, said the report was an eye-opener. She believes Medicaid expansion is an important, even necessary, step that states should take to treat serious behavioral health issues, such as opioid and other substance abuse problems.

WHY ARE SOME STATES AGAINST MEDICAID EXPANSION?

Combating opioid abuse is a bipartisan concern, but Medicaid expansion creates contention among those on both sides of the aisle. The federal government maintains that Medicaid expansion allows access to quality care for individuals who suffer from addiction or other mental illnesses and who don’t have the necessary resources to get help.

Government officials also argue that Medicaid expansion cuts down on state costs, as many states must fund their own addiction treatment programs.

Medicaid is a product of President Lyndon B. Johnson’s Social Security Act Amendments of 1965, long regarded as one of the most important public health acts of the 20th century. Medicaid is a state-federal joint venture that offers free or low-cost care to many poor individuals and families.

WHO WOULD QUALIFY UNDER THE MEDICAID EXPANSION?

Medicaid expansion increases the income allotment to qualify for these services to as high as 140 percent of the federal poverty level (FPL), although the limit varies from state to state. Those who oppose Medicaid expansion claim the states and federal government can’t afford to expand. Some also cite a physician shortage that makes enrolling new members in health care coverage difficult.

Though many health policy experts predicted that states would quickly adopt Medicaid expansion after the Affordable Care Act passed, the rate has slowed. Federal officials are hoping that offering inpatient treatment services for those who need it will encourage states to jump aboard before President Obama leaves office.

HOW WILL THE NEW PROVISION HELP?

Low-income Americans seeking addiction treatment often find themselves at the mercy of state and local resources, which are often underfunded and overflowing with patients who need help. The aforementioned proposal aims to fix that. By allowing 15 days of inpatient addiction treatment, individuals would have the opportunity to undergo detoxification, a process that often requires medical intervention.

In most cases, alcohol and drug withdrawals need medical supervision. Withdrawal symptoms from opioids can range from nausea and vomiting to abdominal cramping, insomnia, anxiety, sweating and agitation. Physicians can control the severity of withdrawal by administering medications and making the process easier. Those who drink heavily for long periods are prone to seizures and delirium tremens, which can be deadly.

DOES THE PROGRAM GO FAR ENOUGH?

Detoxification in a controlled environment is essential to a patient’s health, and such settings aren’t always available to low-income individuals. With Medicaid expansion, many more poor individuals will be able to detox and begin the healing process, a scenario that may not otherwise be possible. Though this will make life easier for people who are suffering, many wonder if the program isn’t shortsighted.

One of the principal complaints about the program is that it does not provide enough care to those who need it most. In some areas of the country, addiction health experts aren’t happy with the news. They say 15 days is too short a time to make a real difference for people in the throes of addiction.

Mike Harle heads the nonprofit addiction treatment program Gaudenzia, which serves 20,000 individuals per year. He said he doubts that the 15-day timeframe has anything to do with science-based evidence, adding that those suffering from addiction need much longer to recover, per his own observations.

According to the National Institute on Drug Abuse, a division of the National Institutes of Health (NIH), Harle may be right. The publication Drug Addiction Treatment: A Research-Based Guide suggests there is no appropriate predetermined length of treatment. Patients, the guide maintains, progress through the recovery process at different rates.

So, just what is the desired length of a treatment program? Like almost everything else medical-related, it depends.

Research shows no optimal length of time for addiction recovery treatment, but evidence does strongly suggest that “adequate” treatment length is essential to a good outcome. The NIH cites patient dropout as one of the main setbacks for treatment programs. Therefore, motivational interviewing can be helpful in keeping patients engaged. When recovering addicts see their disease as a chronic condition, they’re less likely to experience relapse when they return to the outside world.

Some addiction treatment experts maintain the inpatient treatment covered by Medicaid is such a short window for recovery that it may do a person more harm than good. The proposal may also close existing loopholes that allow nonprofits to provide high-quality addiction treatment care. For instance, in Pennsylvania, behavioral health specialists use an obscure federal provision to receive reimbursement for longer treatment stays in especially dire cases of addiction. Officials worry that this provision may disappear under the new Medicaid proposal.

Chris Benedetto, a 30-year-old man from Pennsylvania who started using heroin when he was 13, says that this program saved him. Now an assistant addiction counselor, he worries others won’t have the same opportunity for recovery under the new proposal. Thanks to Pennsylvania’s loose interpretation of current federal rules, the Scranton native received five months of free inpatient rehabilitation after several relapses. It was that longer stint that allowed Benedetto to finally kick the habit and remain clean.

WHAT ABOUT ALTERNATIVE TREATMENT SERVICES?

Others worry that the Medicaid proposal will decrease the popularity of outpatient treatment services. Dr. Jeffrey Samet, a researcher for Boston University’s Clinical Addiction Center, explains how these services can be effective for some struggling with addiction. He points to a risk of abuse if inpatient services become the new standard of care for low-income individuals.

Providers and patients alike may game the system, needlessly costing taxpayers valuable dollars, according to Samet. He urges providers to consider outpatient services whenever possible.

‘HALF A LOAF’: DEFENDING THE NEW PROVISION

While the new Medicaid proposal has its detractors, it certainly has its advocates too. Some applaud its attempt to reach a population who desperately needs, but does not have access to, high-quality care.

Cindy Mann, a former top administrator for the Centers for Medicare and Medicaid Services, discussed how the change is long overdue and is actually capable of making a big difference. She conceded that 15 days may not be enough for some patients, but suggests that “half a loaf” is better that none at all.

Mann also offers some relief for those who worry about funding disappearing: State and local governments are still free to fund longer programs for those who need it. And if they’re still not happy with the plan, she explains, they can create new programs and apply for additional federal dollars.

Mann is referring to the Innovation Accelerator Program, which aims to improve the delivery of substance abuse rehabilitation services. The Centers for Medicare and Medicaid Services funds this program too. It incentivizes nonprofits and other addiction treatment centers to develop programs that improve the continuum of care as it pertains to substance abuse. In other words, agencies that design programs that facilitate the transition from 15-day inpatient rehabilitation to separate outpatient services may be able to get those programs funded with additional federal dollars.

Insurance companies vary in their approach to substance abuse rehabilitation services. A lack of concrete data allows private insurers to cover virtually any amount of inpatient service time. Staying in treatment for as long as necessary is the biggest indicator of successful rehabilitation.

The NIH points to a variety of factors that keep people in treatment:

Another oft-cited factor in treatment is cost. Those addicted to heroin or other opioids often receive a methadone prescription to control their withdrawal symptoms, costing an average of $4,700 for a year of maintenance treatment. The actual cost the recipient pays depends on the amount of insurance coverage. Since Medicaid provides low- or no-cost services in some states, taxpayers could be shouldering all or part of this cost. However, this number pales in comparison to estimates that substance abuse costs our nation $600 billion annually, according to the National Centers on Drug Abuse.

Treatment is much less expensive than its alternative, incarceration, which costs an average of $24,000 per year for an inmate.

Some estimates suggest that every dollar invested in substance abuse treatment programs has a return of up to $7 because of reduced crime, justice system costs, and theft. Economics aside, stepped-up treatment leads to fewer drug-related accidents, deaths and overdoses.

In short, addiction treatment services are well worth their upfront investment. Insurance companies, however, do not always cover the required amount of rehabilitation for people’s recoveries to be successful, leaving individuals and their families struggling to cover the difference. Medicaid’s new proposal hopes to bridge this gap for low-income families that suffer from addiction.

GETTING HELP TO THOSE WHO NEED IT MOST

The Medicaid proposal is an important attempt to close the so-called treatment gap, which refers to the idea that many in this nation need substance abuse services, but few receive the help they need. In 2011, some 21 million people needed treatment for a drug or alcohol problem, yet only 2.3 million actually received it, according to the NIH.

Closing this gap will require a multifaceted approach. Increasing access to treatment is an important first step, but there is more that can be done. Reducing the stigma of mental illness and substance abuse is another important step, as is increasing awareness of addiction rehabilitation as a valuable treatment option.

For every income level, treatment generally begins with a primary care physician. PCPs are trained to use screening, brief intervention, and referral to treatment (SBIRT) methods to connect patients with substance abuse problems to appropriate treatment. With Medicaid expansion, more low-income individuals will have access to primary care services.

To combat the substance abuse epidemic in the U.S. efficiently, behavioral health experts and state governments will have to take advantage of every tool available to them. By accepting Medicaid expansion, states can provide a stronger foundation for physicians and counselors to improve the continuum of care for those who struggle with substance abuse, particularly lower income individuals.