Understanding the Impact of Substance Use and Pregnancy

Women are more likely to use prescription medications than men, according to NIDA. They are more sensitive to pain, and they turn to prescription medicines to treat chronic mental health issues, such as anxiety and depression. But despite these reasons, opioid use during pregnancy is not good for either the mother or the child.

According to the Centers for Disease Control and Prevention (CDC), pregnant women who use opioids must be aware of the risks, whether they are using heroin, an illicit opioid, or prescription opioids. Opioid misuse and opioid use as directed are both risky for pregnant women, the federal agency says.

Maternal death has been linked to opioid use disorder, the CDC reports. It also says babies exposed to long-term opioid use experience poor fetal growth, preterm birth, stillbirth, certain congenital abnormalities, and (NAS). Mothers who are taking opioids as part of a medication-assisted treatment (MAT) program can also have babies who go through NAS.

Withdrawal can begin for a baby exposed to opioids within the first 72 hours or three days after birth. They can experience various symptoms, including trembling, irritability exhibited by high-pitched or excessive crying, seizures, and sleep problems.

Babies exposed to opioids during their mother’s pregnancy can also result in longer hospital stays, and their chances of having to return to the hospital 30 days after they leave are also high.

The long-term outcomes for these babies are still under study. “More research is needed to better understand the spectrum of possible outcomes related to opioid exposure during pregnancy,” the CDC writes.

Alcohol is viewed as harmless because it is all around us. It is easy to get, and misusing or abusing it is also easier to hide. But this legal drug that is widely available is deadly to an unborn child.

NIDA reports that “children born to mothers who both drank and smoked beyond the first trimester of pregnancy have a twelvefold increased risk for sudden infant death syndrome (SIDS).”

In 2016, the CDC reported that an estimated 3 million women ages 15-44 were at risk of exposing their developing baby to alcohol. This exposure was due to the women drinking, being sexually active, and not using birth control. Even women who drink and use other substances can harm the fetus before she learns she is pregnant.

Alcohol exposure can cause babies to develop lifelong disabilities that affect their physical, behavioral, and mental health. These are called fetal alcohol spectrum disorders or FASDs, and as the CDC notes, and they occur in people whose mothers drank during pregnancy.

A person with FASD can experience any of the following:

These are just a few of the symptoms the CDC lists. There also are different FASD diagnoses, depending on the symptoms a child exhibits. These conditions include fetal alcohol syndrome (FAS), alcohol-related neurodevelopmental disorder (ARND), and alcohol-related birth defects (ARBD). The American Academy of Pediatrics explains what these conditions are and how prenatal alcohol exposure affects children as they grow.

The CDC notes that diagnosing FASDs can be challenging. There are no blood tests or medical tests for them, and other disorders share symptoms with FAS. A physician or a medical professional specializing in FASDs is still the best person to diagnose the condition. There is no cure for FASDs, according to the CDC, but there are treatment options that can be modified based on a child’s needs.

Recreational drugs are not safe to use during pregnancy. Cocaine, methamphetamines, heroin, other designer or club drugs, and even marijuana, can put a baby at risk of health problems.

Premature birth, which is a birth that happens before 37 weeks of pregnancy, can occur due to the use of illegal drugs. Low birth weight can occur, which is when the baby weighs less than 5 pounds and 8 ounces. Infections, heart problems, reduced head size, and other birth congenital disabilities are also possible.

Women who use these drugs while pregnant increase their risks of stillbirth. Other effects on a fetus and its mother include:

Polydrug use, the use of two or more drugs at the same time, is common among street drug users. For example, a person can drink and smoke or mix heroin and cocaine to experience the combination’s highs and lows. This practice can further complicate substance use’s effects on a developing baby and its future.

According to the American Pregnancy Association, between 12% and 20% of pregnant women smoke, and as a result, 1,000-plus babies die yearly because they do. Cigarettes, electronic cigarettes, and other devices used for smoking nicotine are unsafe for pregnant women to use. Any product containing nicotine can harm a baby’s brain and lungs.

Smoking while carrying an unborn child can also lead to having a premature birth, or low birth weight, or congenital disabilities, such as a cleft lip or cleft palate. Some people see e-cigarette use as safer, but it has its share of risks. Even the flavorings used in e-cigarettes can be harmful to a developing baby.

Getting Help for Substance Addiction 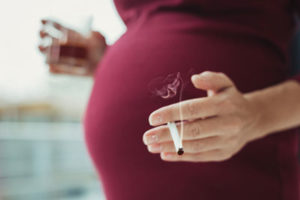 While it is widely known that substance use during pregnancy is not good for the mother or the baby, this fact does not deter some mothers-to-be from using substances. The impact of substance use on pregnancy is not always enough to make some women decide not to use. Usually, substance dependence and/or addiction is the reason they find they cannot.

Serenity at Summit can help you or your loved one who is battling maternal addiction. Our treatment programs focus on the individual, putting their needs first as they work to overcome substance abuse. Give us a call today to learn more about your programs and how we can help you.