Mixing Klonopin & Alcohol: What to Be Aware Of

Drinking alcohol while on Klonopin is dangerous. It could potentially cause deadly breathing problems and memory issues.

It is very dangerous to drive after taking Klonopin and drinking, even if you only consume one alcoholic drink.

Klonopin is a brand name of the drug clonazepam, a benzodiazepine. It is generally used to treat certain seizure and panic disorders — both those that do and do not involve agoraphobia.

Its effects on the elderly and those under 18 years old are not fully understood. People in these age groups should be carefully evaluated periodically when on the drug.

Klonopin, like many drugs and all benzodiazepines, does not mix well with alcohol. You should not drink alcohol or otherwise engage in recreational drug use while on Klonopin, as it can potentially have deadly consequences.

Klonopin on Its Own

Klonopin is commonly associated with the following side effects. Bolded effects are especially relevant when it is mixed with alcohol.

It can also have the following very serious effects, which can be dangerous and warrant calling your doctor as soon as possible. Again, impacts relevant to mixing it with alcohol are in bold.

As it stands, you should not be driving or operating heavy machinery on Klonopin until you are fully aware of how it affects you. Do not underestimate the drug’s ability to influence coordination even if you will generally be able to drive while on it.

The biggest concern when mixing Klonopin and alcohol is the fact that alcohol is a depressant and can affect your breathing. On its own and in moderation, this effect is generally not dangerous to healthy individuals, although it certainly can be if you are binge drinking or engaging in other unhealthy drinking practices.

Mixing two drugs that affect breathing can make it easier to overdose. A seemingly moderate amount of drinking can suddenly become dangerous, as the effects of the drugs stack on top of each other. As breathing slows, potentially without the user knowing since their judgment might also be impaired, their brain might not be getting enough oxygen.

Impaired motor control is especially noteworthy as it again comes back to the fact it is easy to misjudge your limits when mixing drugs. While it is commonly known that drinking and driving are dangerous, you might incorrectly assume how much alcohol is too much when it is mixed with Klonopin. Even small amounts of alcohol might mix poorly enough to turn you into danger on the road.

Is There a Safe Amount of Mixing?

If you regularly take Klonopin for a legitimate medical reason, you should discuss drinking any alcohol with your doctor. The general rule is they should not be mixed.

If you use Klonopin recreationally, which is not advised, you should never mix it with alcohol. It can lead to lapses in judgment. These misjudgments could seriously injure or kill you or someone else. 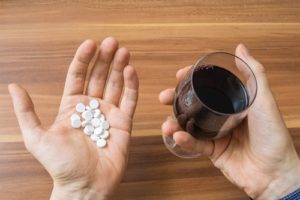 If a person has become comatose, is not breathing, has extremely shallow or stopped breathing, and/or seems severely confused, call 911 immediately.

They are likely experiencing an overdose and could die or be permanently brain damaged without immediate medical aid.

Always err on the side of caution.

Use the following steps as a guide when calling 911:

Should I Drink While on Klonopin?

No, it is a bad idea to drink while on Klonopin. This is why doctors, and the packaging for Klonopin, advise against it. It is dangerous to you and dangerous to others if you drive or otherwise need to do something involving coordination. It should also be noted that willfully ignoring such labels and warnings, and then hurting someone or damaging property in an accident, may potentially be grounds for reckless endangerment. Therefore, using alcohol with Klonopin is both medically and legally inadvisable.

Klonopin and Alcohol: A Deadly Combination

People often use benzodiazepines or alcohol to relax before engaging in social situations. Alcohol and Klonopin are no exception, and mixing the two, no matter the scenario, is a recipe for disaster. The combination can lead to deadly effects. Many people might wonder, “How long after taking Klonopin can I drink?” To play it safe, you must wait until the drug has exited your system in its entirety. Klonopin has a long half-life of 20 to 50 hours, meaning you should not consume alcohol for up to nine days.

The half-life refers to the time needed for a drug’s active substance in your body to be reduced by half. It all depends on how long the body processes the substance and gets rid of it. It can vary from a few hours to a few days and, in some cases, several weeks. Due to the long half-life, clonazepam and alcohol can pose problems days after you’ve stopped using the medication. You must speak to your doctor to determine the best course of action. If you’re wondering if clonazepam can be mixed with alcohol, the answer is a flat-out no.

Unfortunately, Klonopin and alcohol can cause severe withdrawal symptoms that require intensive treatment. If you’re abusing them separately or together, it’s important to understand the actions you must take.

If you drink in excess for weeks, months, or years, you’re setting yourself up for uncomfortable and potentially severe withdrawal symptoms upon stopping, known as alcohol withdrawal. Your symptoms could range from mild to fatal.

If you only drink on occasion, it’s unlikely you’ll experience these symptoms. However, if you’re using clonazepam and alcohol, your odds of developing severe symptoms increase dramatically. If you’ve gone through alcohol withdrawal before, you’re more likely to encounter it again the next time you stop.

Alcohol withdrawal can occur in as little as six hours after your last drink. These symptoms include the following:

When you reach 12 to 48 hours after your last drink, the symptoms can become more pronounced and severe. At this stage, a hardcore alcoholic might experience hallucinations or seizures. You could see, feel, or hear things that aren’t there. For that reason, you must seek professional help.

The next few days will be critical, and 48 to 72 hours after your last drink can result in a severe complication known as delirium tremens (DTs). Symptoms can include delusions and vivid hallucinations. You must seek help if you experience anything we’ve discussed. It could be a matter of life or death.

These symptoms are similar to alcohol withdrawal and include the following:

These symptoms can occur anywhere from two to seven days after your last dose, with acute symptoms persisting for two to eight weeks. Like alcohol withdrawal, clonazepam can produce life-threatening issues like seizures. You should never attempt to go through this process alone. Symptoms you initially took the medication to treat will come back even worse, known as rebound symptoms.

If you’re concerned about severe withdrawal symptoms because you’ve been abusing Klonopin and alcohol, you must seek professional addiction treatment right away.