Librium is a prescription brand name for a drug called chlordiazepoxide, which is used as a sedative medication. It may be used to manage anxiety disorders, and it may also be used for the short-term relief of anxiety symptoms. Its anxiolytic (anti-anxiety) effects can help calm anxiety symptoms and allow you to rest and relax. In addition to anxiety disorders, Librium has also been used to treat alcohol use disorders. It’s specifically used to manage alcohol withdrawal and alleviate uncomfortable or dangerous symptoms.

Librium is in a class of drugs called benzodiazepines, which have a specific chemical structure that allows it to bind to GABA receptors in your brain and nervous system. GABA (gamma-aminobutyric acid) is a naturally occurring chemical in your brain that works to bind to receptors and slow down activity in your central nervous system. It’s an important chemical that’s tied to rest and relaxation. People with anxiety disorders may have trouble resting and relaxing, and managing distressing emotions when they need to. Drugs like Librium can help increase the effectiveness of GABA, which can provide needed relaxation to people with anxiety disorders.

Benzodiazepines work with GABA in a very similar way to alcohol, which is why they may also be used to treat alcohol-related problems like withdrawal.

Benzodiazepines are typically prescribed for short-term therapeutic use. Whether they’re used to treat anxiety or alcohol use disorders, they will ideally be used for a few weeks. Long-term benzodiazepine use may be less effective over time. As your body builds up a tolerance, your regular dose may feel less effective. Long-term use can also increase your risk of chemical dependence on a benzodiazepine.

Some benzodiazepines are also used as recreational drugs. When Librium is abused, it increases your risk for potentially dangerous side effects and consequences, including overdose, dependence, and addiction. Quitting Librium after becoming dependent on it can cause withdrawal symptoms that are similar to alcohol.

How Does Alcohol Withdrawal Work? 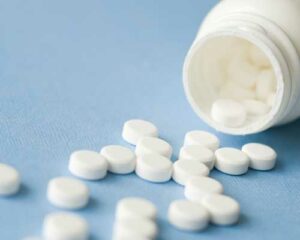 Alcohol withdrawal is an unpleasant consequence of alcohol dependence. Since alcohol is so common in our culture, that withdrawal has been a well-known phenomenon that comes with alcoholism for centuries. It’s often called by a variety of colloquial terms, including the shakes. Severe alcohol withdrawal has been called the horrors, bats, and shaking delirium. There are several prescription and illicit drugs that can cause withdrawal symptoms, but few cause symptoms that are as dangerous as central nervous system depressants.

Alcohol is a depressant, and frequent heavy drinking causes your body to get used to the effects of alcohol. As your body adapts to alcohol’s depressing effects, it will start to rely on it to maintain chemical balance. When you try to cut back or stop drinking, your body will suddenly be without the nervous system suppressing chemicals it has become used to, and you may feel the consequences of chemical imbalance.

Withdrawal symptoms are often the opposite of the drug’s effects. Since alcohol slows down central nervous system activity, withdrawal can increase stimulation. Withdrawal symptoms can range from mild discomfort to potentially life-threatening symptoms.

Alcohol withdrawal symptoms may start out mild and increase over the next few days. You’ll also experience cravings to drink alcohol that may be difficult to control or resist. You may reach peak symptoms within 48 hours. Peak symptoms are when you feel the worst in the course of withdrawal. You may experience nausea, vomiting, tremors, and even hallucinations. When your withdrawal reaches its peak, you’ll start to feel better. Some symptoms like cravings and anxiety may continue.

How Does Librium Treat Alcohol Withdrawal?

Librium and alcohol work in similar ways in the brain. Both influence GABA receptors and increase the effectiveness of GABA in causing central nervous system depressing effects. When you go into alcohol withdrawal, it’s caused by the sudden shift in your brain’s chemical balance. Alcohol withdrawal is worse when you quit cold turkey. However, Librium can help alleviate some alcohol cravings and stave off uncomfortable or dangerous withdrawal symptoms. Librium can be used to treat acute alcohol withdrawal symptoms to avoid potentially dangerous complications. However, it can also be used to taper off of alcohol gradually to avoid severe symptoms.

Why can’t you taper off alcohol with alcohol?

Tapering requires careful attention to dosage. Too much, and your taper will be ineffective. Too little, and you may experience more severe withdrawal symptoms. There are several reasons why it’s better to taper with prescription medication and a doctor’s help rather than tapering with alcohol. Alcohol is less standardized, and different drinks contain different amounts of alcohol. If you have an alcohol use disorder, it may be harder to stop drinking than it is to take a proper dose of a medication. Librium may also be less likely to cause intoxication symptoms, like alcohol can.

Benzodiazepines are also less likely to lead to a dangerous overdose than other depressants, including alcohol. So Librium may be safer overall than alcohol for someone with a substance use problem.

Librium is used in patients that are already showing acute withdrawal symptoms. Heavy drinkers may take doses that are used in treating anxiety. However, it’s important to work closely with your doctor to find the right dose for your needs. While they are safer than other depressants, benzodiazepines can be potentially dangerous in high doses. An appropriate dose for your needs may be anywhere from 5 to 100 milligrams. In some cases, higher doses may be needed.

Potential Side Effects of Librium

When Librium is being used to treat alcohol withdrawal, it’s important for prescribers to only give you the drug after withdrawal has already started. Alcohol withdrawal indicates that you no longer have high concentrations of alcohol in your body. If alcohol and Librium are taken at the same time, it could lead to a potentially life-threatening overdose.

If Librium is misused or abused recreationally, it can lead to substance use disorders, just like alcohol can. It can also lead to dangerous overdose if it’s mixed with other benzodiazepines, barbiturates, or opioids.

Unfortunately, as a benzodiazepine, Librium can also produce chemical dependence or addiction, meaning that severe withdrawal symptoms are possible. Although Librium for alcohol withdrawal is common, many people can trade one addiction for another. Librium detox could be necessary for someone who abuses the drug, especially if they abuse Librium and alcohol. Since the medication enhances GABA’s effects in the brain, it results in feelings of calmness and relaxation. As you continue using these, no matter the reason, your brain becomes reliant on the drug to continue this feeling.

If you stop using Librium abruptly or significantly decrease the dose after you’ve developed a tolerance, dependence, or addiction, your brain will still produce these neurotransmitters to a much lesser extent. You will notice you feel anxiety, an increase in blood pressure and heart rate, and other symptoms of Librium withdrawal. These are considered minor withdrawal symptoms.

Until your brain has readjusted to a pre-Librium state of functioning, your withdrawal symptoms will persist. This could be days, weeks, months, and in some cases, years. Fortunately, medical detox will help with the withdrawal process, providing you with the resources to be more comfortable. Medically supervised detox is a vital step on the path toward recovery and can protect you from developing severe withdrawal symptoms, which can be dangerous or life-threatening.

If it can be so dangerous, why is Librium used for alcohol withdrawal? Well, since alcohol also affects the same neurotransmitter, GABA, Librium helps reduce the chances you’ll develop seizures. However, that doesn’t mean it’s absent of danger. Many users will experience psychological symptoms from Librium withdrawal for a prolonged period, which is known as post-acute withdrawal syndrome (PAWS). PAWS, which stems from Librium addiction, can be harder to overcome than the first withdrawal symptoms. It can last as long as 18 to 24 months after you break free from Librium abuse. Addiction treatment programs provide therapy to address the condition, providing the user with their best chance at recovery.

As mentioned above, Librium withdrawal is extremely unpleasant. Your symptoms will range from mild to severe. Those using the medication to overcome alcohol withdrawal may only experience mild symptoms. However, if they continue abusing the medication after their alcohol withdrawal symptoms fade, they will be far more severe. It all depends on how long you took Librium, how much you took, and how you took it. The rule of thumb is that the longer and more severe your addiction is, the worse your withdrawals will be, which will make it challenging to remain sober.

The most common symptoms of Librium withdrawal include the following:

Without the proper care, Librium withdrawal can lead to severe and life-threatening seizures, which get progressively worse and are hard to control. For this reason, you must seek professional treatment.

You can also experience what is known as the rebound effect, a re-emergence of symptoms that Librium once relieved. For example, if you took the medication for alcohol withdrawal and noticed it relieved anxiety, your anxiety could return worse than it was before taking the medication. This will make it far more challenging to remain sober.

The only way to get sober and stay that way is to seek medical treatment for alcohol addiction and Librium withdrawal. Treatment can save your life, so don’t wait another day to get the care you need. Addiction isn’t worth it.