Xanax & Cocaine: Can You Mix Them Safely?

Xanax, the brand name of the benzodiazepine drug alprazolam, is prescribed to manage symptoms of anxiety and panic disorders. It is a central nervous system depressant medication that slows autonomic functions, such as blood pressure, respiration, and heart rate to modulate the stress response. Muscle tension, anxiety, and body temperature are reduced with Xanax use.

The U.S. Drug Enforcement Administration (DEA) publishes that Xanax is widely prescribed and one of the benzodiazepines most commonly diverted for recreational use. Xanax is abused for its mellowing high that can cause pleasure, trigger relaxation, and have effects that are similar to those of drinking alcohol.

Xanax is considered a “downer” medication that may be misused to self-medicate anxiety, tension, and high levels of stress. It can also be used as a sleep aid. Combing Xanax with other depressant substances, such as alcohol or opioids, can raise the risk for overdose as the substances will exacerbate the effects of each other. The National Institute on Drug Abuse (NIDA) reports that close to a third of all opioid overdoses also involve a benzodiazepine drug.

Xanax may be combined with other drugs or medications recreationally to counteract some of their perceived negative side effects. Cocaine, for example, is a stimulant drug, sometimes called an “upper.” It causes a person to feel excited, awake, alert, happy, and sociable. It wears off very quickly, however, and the comedown can cause a crash that leaves a person feeling lethargic, drowsy, depressed, and hungry. When cocaine is mixed with a downer like Xanax, the cocaine can mitigate some of the depressant side effects of Xanax, making a person more apt to stay awake and be more alert. The person may still experience the relaxation and pleasure of the benzodiazepine but without lethargy.

According to Cosmopolitan, Xanax is being abused after nights of partying when people have used stimulant drugs like cocaine. They take Xanax in attempts to sleep and stave off potentially rough hangovers.

Again, cocaine’s stimulant effects can have an opposite impact on the brain and body as Xanax’s depressant effects, and vice versa. These drugs can also mask the impact of each other, which can lead to additional risks and the potential for adverse complications as well as increased chances for a potentially life-threatening overdose and possible addiction to one or both substances.

What Happens When Xanax and Cocaine Are Combined

According to the prescription labeling information for Xanax published by the U.S. Food and Drug Administration (FDA), the medication’s central nervous system depressant impact can range from a low level of impairment of functioning to hypnosis. The DEA warns that cocaine use can increase heart rate, body temperature, respiration rate, and blood pressure, leading to hyperexcitability, insomnia, and loss of appetite; these are almost directly opposite to the effects of Xanax. In high amounts, cocaine abuse can cause paranoia and psychosis.

Cocaine and Xanax can interact with each other in a kind of push-and-pull way where the upper and downer effects work against each other. This can cause some of the adverse reactions to be less noticeable and for a person to then inadvertently take too much of one or both and overdose.

NIDA reports that over 10,000 Americans died from an overdose involving a benzodiazepine drug in 2016, and over 14,500 people died from a cocaine-related overdose in 2017. Both drugs are considered fast-acting, which means they start working in the system quickly but also wear off quickly. This can encourage the person to take more of the drugs more often to increase the impact and the high, and it can also elevate the overdose risk.

An Overdose on Cocaine and Xanax Can Be Indicated By the Following:

An overdose involving multiple substances, such as Xanax and cocaine, can have unexpected complications and be difficult to reverse. The medications or treatments that may work to overturn an overdose on one substance may not be as effective on the other. A Xanax and cocaine overdose is a medical emergency that requires immediate professional help.

Is There a Safe Amount? 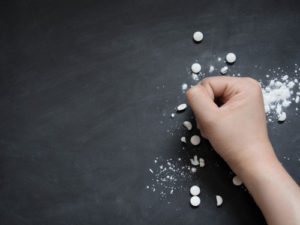 In short, no — there is no safe amount of cocaine and Xanax that can be taken. Cocaine is mostly an illegal street drug with very limited medicinal use in the United States. It is, therefore, largely unregulated and difficult to be sure exactly what is in the drug being taken. Cocaine distributors often use a wide variety of substances to cut the drug before selling it. Many of these substances have unpredictable side effects, and they can be toxic in and of themselves.

When both Xanax and cocaine are taken, it can elevate the odds for drug dependence, daunting withdrawal symptoms, and then addiction. When a person takes a drug like Xanax or cocaine, changes are made to brain chemistry, and some of the neurotransmitters involved in mood regulation and feelings of pleasure are impacted. With repeated interaction, the brain can then struggle to maintain its chemical balance on its own, and emotional regulation is therefore impaired.

Drug dependence forms, which means that when Xanax and cocaine wear off, withdrawal symptoms start. Withdrawal from both cocaine and Xanax can be intense, and when the two drugs are mixed, withdrawal can be even more forceful.

Withdrawal Symptoms of Xanax and Cocaine Can Include the Following:

Xanax withdrawal can even be life-threatening, triggering hallucinations, psychosis, and seizures. Cravings can also be significant for both drugs.