How to Recover from a Xanax Hangover (Tips and Cures)

As the book Principles and the Practice of Psychopharmacotherapy notes, Xanax (alprazolam) is in the class of drugs known as benzodiazepines (benzos for short), which are some of the most widely prescribed and abused drugs in the United States.

Benzos are primarily prescribed to treat clinically significant anxiety and seizure control, but they also may be prescribed to help people sleep, to assist people with withdrawal from alcohol and certain other drugs, and as anesthetics or preanesthetics. They are used in the treatment of numerous different types of mental health disorders where anxiety is a major symptom, or the person becomes irritable, disoriented, or combative.

Xanax is often described as a sedative, or more accurately, as a central nervous system depressant medication (CNS depressant drug). Xanax works to increase the availability and actions of the primary inhibitory neurotransmitter in the brain: gamma-Aminobutyric acid (GABA). The function of this neurotransmitter is to modulate the firing rates of other neurons by reducing their firing rates. Thus, taking Xanax results in a person’s brain working more slowly.

What Is a Xanax Hangover?

A Xanax hangover can refer to a readjustment process that sometimes occurs when a person who has never used the drug begins taking it. When the person begins using the drug for medical reasons, mild hangover effects may result when the drug wears off. Over time, the person will adjust.

Benzodiazepines like Xanax also carry a strong risk for the development of physical dependence (withdrawal symptoms) if a person takes them on a regular basis for more than a few weeks. Some people who have developed withdrawal symptoms to Xanax may refer to the symptoms as a “hangover.”

The Xanax hangover is more likely to occur in individuals who abuse the drug than in people who take it for medical reasons because abusers take the drug in greater amounts and more often than individuals using the drug under the supervision of a physician.

Basically, the drug increases the available levels of GABA in the CNS, and the person’s system will naturally try to counteract the imbalance with an increase in other neurotransmitters and hormones. When the person stops using the drug, and the drug is metabolized, this imbalance is now shifted in the other direction toward physical states that are in opposition to the state produced by the Xanax.

The Xanax hangover is sort of a withdrawal effect, but it is more acute and shorter-lasting even in people who only use the drug for a short time. There is a dose-dependent response associated with Xanax hangovers, such that people who use more of the drug are at a greater risk to experience a hangover effect, and taking higher doses of the drug most likely will produce more intense symptoms.

What Are the Symptoms of a Xanax Hangover? 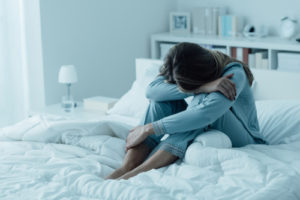 Common symptoms include headaches, nausea, increased pain, and feelings of anxiety. Individuals who have extreme reactions, such as severe depression, agitation, and/or suicidal thoughts, should immediately contact their physician.

How Long Does the Hangover Last?

The hangover symptoms should decrease when the individual’s body metabolizes the Xanax in their system, and the drug is eliminated or reduced to a significant level. Xanax has a half-life of six to 27 hours in most people.

Typically, for individuals who are taking the drug in small amounts for medical reasons, the hangover effects will begin to disappear within six to 12 hours. In some cases, the person may take a full 24 hours to recover and may still experience residual symptoms like mild nausea or a headache.

Individuals who are undergoing withdrawal from benzodiazepines may experience withdrawal symptoms that last for much longer (several weeks or more in some extreme cases).

What Can Be Done To Treat a Xanax Hangover?

Time is the surefire way to recover from a Xanax hangover. This means that for most people, the symptoms of a hangover should dissipate rather quickly if they have not developed significant tolerance and dependence.

Another method to alleviate the symptoms of a Xanax hangover would be to take more Xanax, which is what drug abusers often do when they experience withdrawal symptoms. However, this approach is not recommended because a person who takes a drug to relieve the withdrawal symptoms of the drug has very likely developed a severe substance use disorder that will require intensive professional treatment. People who begin early by treating the mild symptoms of a Xanax hangover by taking more Xanax are on their way to a full-blown addiction.

According to numerous sources, including the book Quick Guide to Psychiatric Emergencies: Tools for Behavioral and Toxicological Solutions, there are more productive ways to address a Xanax hangover for an individual who is experiencing it for the first time.

Ways To Address a Xanax Hangover

If people who have been taking Xanax for more than a few weeks develop any level of physical dependence on the drug, they are advised never to discontinue using it without first talking to their physician.

For most individuals who use benzodiazepines for extended periods, the approach to discontinuing the drug is to slowly wean down the dosage and taper off the drug as opposed to discontinuing it abruptly. This avoids issues with withdrawal and hangover-like symptoms.

The best way to avoid a Xanax hangover is not to use the drug in the first place. Some individuals may find they need to use benzodiazepines for medical reasons, and they could discuss alternatives with their physician if they are worried about the effects associated with these medications. Individuals who abuse Xanax should seek a consultation with an addiction treatment professional to learn how to discontinue their use of the drug.