If you woke up this morning feeling some anxiety, it might have been normal. We mean that if you had a big test, a job interview, or something you’re not comfortable with doing but felt some anxiety before it happened, there’s nothing seriously wrong with you. However, if you woke up in the middle of the night from a sound sleep having a panic attack, known as a nocturnal panic attack, it’s a sign you might be struggling with a panic disorder. Although it may not seem like it on the surface, panic disorders and anxiety disorders are two different conditions. They share some similarities. However, these two conditions affect you differently and require a different approach to treatment.

According to the National Institute of Mental Health (NIMH), 2.7 percent of U.S. adults were diagnosed with panic disorder in the previous year. The prevalence was higher in females at 3.8 percent than it was for males at 1.6 percent. The same statistics found that an estimated 4.7 percent of adults will experience panic disorder at some point in their lives. Although the figures differ significantly compared to anxiety disorders, both conditions can cause debilitating symptoms.

Now, we know that one difference panic disorders and anxiety disorders don’t share is their prevalence in society. One is far more widespread than the other, but what other similarities and differences are there? Below, we’ll delve into the difference, similarities, and how you can manage your symptoms if diagnosed with one of these conditions.

What Is a Panic Disorder?

You can only be diagnosed with panic disorder if you’ve had at least two panic attacks, where you feel overwhelmed and terrified, despite not 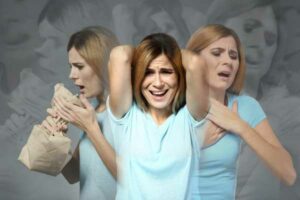 being in any danger and constantly worrying about having another one. Panic disorder is severe enough that individuals will change their daily routine to avoid having another panic attack. It’s classified as a type of anxiety disorder.

According to WebMD, 10 percent of adults in the United States have panic attacks each year. These typically start around the ages of 15 to 25, but children or adults are also at risk of panic attacks. An estimated 33 percent of people have at least one in their life, but most won’t go on to meet the criteria of a panic disorder. An estimated 3 percent have it, and it’s far more common in women than men.

A panic attack is something that comes on strong and leaves you feeling fearful. It can happen anywhere, at any time. If you have a panic disorder, you’ll have four or more of the signs below:

Panic attacks typically subside within five to 10 minutes, but lingering effects can persist for hours. You might feel as though you’re having a stroke or a heart attack, causing many people with panic disorders to seek emergency medical care. Most with the condition can pinpoint the cause of their panic attack and start avoiding those places. It can lead to something called agoraphobia, a fear of leaving their home. However, others may not know the cause of the panic attack, leading to an even more irrational fear that it’ll happen again.

What Is an Anxiety Disorder?

An anxiety disorder is a type of mental health condition that causes you to respond to situations with fear and dread. It can also cause you to experience physical signs of anxiety, including sweating and a pounding heart. As mentioned above, the occasional anxiety is normal. In some cases, anxiety can be beneficial as it helps us recognize danger and focus our attention to avoid getting hurt. However, we move past that with constant anxiety when it’s affecting the quality of our life.

Anxiety disorders occur when it interferes with your ability to function normally in life, you overreact to certain triggers of your emotions, and you can’t control how you respond to the situations. Anxiety disorders make it much harder to get through a day. However, many treatments exist. There are various types of anxiety disorders, including the following:

These symptoms will vary based on the type of anxiety disorder you’re diagnosed with but include the following:

The Difference Between a Panic Attack and an Anxiety Attack

Many people talk about panic attacks and anxiety attacks as if they are the same. However, they’re different conditions, meaning their symptoms are different. Anxiety attacks are not mentioned in the Diagnostic and Statistical Manual of Mental Disorders (DSM-5). Still, it defines anxiety as a number of common psychiatric disorders, with panic attacks being defined as something that comes on suddenly. Panic attacks, which involve intense and overwhelming fear, are accompanied by shortness of breath, a racing heartbeat, and nausea. They’re categorized as unexpected or expected.

Unexpected attacks are exactly what they sound like, something that comes on without a cause. Negative external stimuli, such as stress or a phobia, cause expected panic attacks. Panic attacks can happen to anyone at any time, but what indicates that you could have a panic disorder is the amount, severity, and frequency of these attacks.

Anxiety typically stems from the anticipation of a stressful event, such as a job interview, boarding a plane when you’re afraid of flying, or going on a hike where animals might be present. Since the DSM-5 does not recognize it, the symptoms are open to interpretation. When someone is described as having an anxiety attack, their symptoms can differ from someone else’s attack but still be considered an anxiety attack.

Since these two conditions share some similarities, their treatment approach will also be somewhat of the same. You can receive an official diagnosis only from a medical professional, but we’ll discuss some of the treatment options they could mention to you. Treatment can include psychotherapy, medication, or both.

Cognitive behavioral therapy (CBT) is a widely used and effective means of treating anxiety and panic disorders. It can help you see your worries in a new way. Counselors will assist you in developing new strategies to manage your triggers when they come on. CBT can also help you pinpoint and neutralize unwanted thoughts that worsen an anxiety disorder.

Exposure therapy is another method used to control and help with anxiety. It’s controlled exposure to situations that make you anxious and help you learn how to confront these fears in a different way. Doctors will also suggest breathing exercises when an attack arises.

If therapy alone isn’t working, doctors may suggest medication. This can include antidepressants, beta blockers, or anti-anxiety drugs like benzodiazepines. All these drugs have the potential for adverse effects, but your doctor will recommend the best treatment in your situation. In most cases, you will go through a combination of therapy with medications if your condition is severe enough to warrant it. Speak to your doctor to find out what works best for you.