Dissociative identity disorder (DID) is a poorly understood and sometimes controversial mental health problem.  It was once called multiple personality disorder, but a better understanding of DID’s nature led to the adoption of its new name. DID symptoms, which draw public attention, may be strange but misunderstanding the disorder can lead to stigma that could prevent people from seeking help and treatment.

Learn more about dissociative identity disorder and how treatment can help lead to a more functional and fulfilling life.

What Is Dissociative Identity Disorder?

DID is just one mental health issue that’s in a broader category of dissociative disorders. Dissociation is the state of feeling mentally distanced from yourself or the world around you. Dissociation is a normal function of your brain that works to protect you from overwhelming stressful or traumatic experiences.

People who go through traumatic events, such as car accidents, often report feeling like they are observing the situation from the outside. The classic out-of-body-experience is a mark of dissociation. It’s so common that the National Alliance of Mental Illness (NAMI) reports that as much as 75% of people experience a dissociative episode at some point in their lives.

As with many mental health issues, the exact cause of dissociative identity disorder is difficult to determine. While DID has several risk factors, it is unknown why those factors lead to DID in some people but not others. It’s likely that DID and other mental health problems may be caused by several factors working together like genetics, environmental factors, and trauma.

Trauma, especially sexual assault or abuse, may be a factor that leads to the development of dissociative identity disorder. Because it can be a way to cope with trauma by distancing yourself from the trauma, it’s similar to other dissociative disorders. DID can be a way to adopt a persona of someone stronger or someone who did not experience trauma.

DID can happen in association with childhood trauma and ongoing abuse. Children who go through abuse often dissociate to cope with feelings of powerlessness in consistent danger. However, after a dissociative moment, they still have to deal with pain and fear. DID can occur as a way to give that fear to someone else or take on a personality that one feels is stronger and more resilient than oneself.

How DID Is Different From Being Multifaceted

There are many people who have multiple aspects of their personality that may seem very different from one another. A straitlaced CEO may enjoy playing laser tag after she finishes work. An eccentric artist with a messy studio may keep his house organized and tidy. These seemingly opposite personality traits aren’t considered distinct personas. The artist and the CEO both see them as different aspects of themselves. However, someone with DID doesn’t consider other personalities as a part of themselves. Things said and done by one personality feel completely separate from another’s behavior.

In many cases, one personality will not remember the time spent as another and vice versa. This often draws the parallel with Dr. Jekyll and Mr. Hyde, when Jekyll goes to sleep, and Hyde wakes up. However, the Jekyll and Hyde comparison often leaves the stigma that DID makes someone is dangerous, though they rarely are. In many cases, the pieces of their fragmented personalities often behave as typical but separate people.

The Signs of Dissociative Identity Disorder

DID may seem bizarre, but people can live with it for years before they’re diagnosed or realize they have a problem. One of the most common signs that a person has a dissociative identity disorder is memory lapses. Missing chunks of time and amnesia are said to be caused when one personality takes control of the body without another personality knowing. This can seem like it’s difficult to recall what you ate for breakfast or what you did the day before. But, in extreme cases, people with DID may suddenly find themselves walking on the sidewalk, not knowing where they are or how they got there. 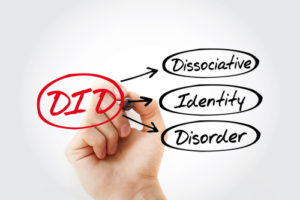 People with DID may also have other dissociative symptoms like feeling detached from themselves or the world around them. They often experience co-morbid conditions like anxiety disorders and post-traumatic stress disorder (PTSD). People with DID often refer to the first, dominant personality as the original.

Alters is a term used to describe separate personality fragments that don’t share a memory with one another. The term is common, but it’s not used by everyone in DID research and treatment. Alters can be completely separate without having personal knowledge of one another. However, there can also be co-conscious alters that are present and aware of what’s happening when they are not in control. Alters take over, which is sometimes called coming out or fronting. When an alter is not co-conscious with another, they do not share a memory and may cause amnesia in the alter that is not in control. Alters often take control or come out in response to trauma as a way to help or protect a person with DID.

How Is DID Treated?

A lot is still unknown about dissociative identity disorder, but treatment options are available. As a diagnosis, DID is sometimes controversial. Some believe it may be a manifestation of other disorders like PTSD. However, amnesia is a unique symptom not commonly associated with PTSD.

There’s no known cure for DID, but many people with the disorder have learned to live with other personas in a way that’s functional and fulfilling. Treatment may include psychotherapy (talk therapy) as well as lifestyle adjustments and self-care. Like other dissociative disorders, DID often improves when stress, anxiety disorders, and past traumas are addressed. For that reason, therapies that address trauma are helpful.