Anxiety Attacks: Tips on How to Stop It in It’s Tracks

Anxiety disorders affect 40 million adults in the United States each year. That makes it the most common mental illness in the country. Anxiety can cause one of the most frightening experiences in mental health issues: anxiety attacks.

Anxiety attacks can happen as a symptom of anxiety disorders like panic disorder and post-traumatic stress disorder. They can come on suddenly and without warning. You may feel like something is wrong without even knowing what you’re afraid of. In other cases, panic attacks take on the form of things you’re actually worried about, like your family, job, or health. Though they can be terrifying, they are ways to address anxiety and panic problems through self-care and professional help.

Learn what you can do to alleviate or stop a panic attack when one occurs.

What Is an Anxiety Attack?

An anxiety attack, also called a panic attack, is different from general anxiety or other forms of anxiety. Though anxiety attacks may be a symptom of an anxiety disorder, they refer to specific episodes of heightened anxiety and even physical symptoms. Panic attacks are sudden and intense feelings of fear, panic, terror, and racing thoughts.

Panic attacks can be associated with specific fears. For instance, someone with post-traumatic stress disorder (PTSD) may have a panic attack that’s tied to a trigger that reminds them of a traumatic event. However, panic attacks can also come on with no obvious cause, which makes it difficult to anticipate. The unpredictable nature of panic attacks doesn’t stop there. Panic attacks may appear as an isolated event. They may happen a few times and then disappear, or they may indicate a longer-lasting panic disorder.

Panic attacks may also contribute to a general anxiety problem. Attacks are brief episodes that last between a few seconds and a few minutes. But they can be so unpleasant that people experience general anxiety that’s marked by the fear that another one could occur.

Panic disorders often begin in young adulthood, and they’re more common among women than men. Though panic attacks can be frightening and frustrating, they are treatable with therapy and medications. In many cases, they go away on their own or as soon as a stressful season of your life is over.

What Causes a Panic Attack?

Determining the cause of a panic attack or a panic disorder can be tricky. For many people, there are no common triggers that always cause an anxiety attack. As with many mental health issues, panic disorders are likely caused by a combination of genetic, environmental, and behavioral factors. If you have a parent or grandparent with a panic disorder, it doesn’t guarantee that you will have one. However, it does mean you should take precautions to manage stress in your life.

High-stress jobs, unaddressed anxiety problems, or long-term exposure to stressful situations may increase your risk of experiencing a panic attack. Trauma may also cause you to develop a panic disorder, especially if it’s linked to post-traumatic stress disorder (PTSD). Learning ways to cope with stress may help limit your likelihood of experiencing panic attacks. Other healthy practices, like getting enough sleep, may also lower mental stress.

Tips for Dealing With Panic Attacks

Mental health is unique to your specific needs and background. While people with the same mental health problems share a lot of the same experiences and symptoms, treatment should be personalized to address your specific needs. Some of the following tips are often recommended to people with panic attacks and anxiety disorders, but they may or may not help you. If you’re struggling to manage your mental health, the best thing to do is speak to a professional.

It may be a cliché, but it’s important that professional help is always on the table when you need it. A medical or clinical professional may be able to assess your problem better than you can with a quick search on the internet. They may be able to point you to therapy options or medications that can ease your symptoms and lead to fewer or better-managed panic attacks.

You should see a doctor when your panic attacks last for a long time, if they occur frequently, or if they interfere with your life. Anxiety attacks can cause something called avoidance, which is when you start to avoid places and situations that you associate with your panic attacks, even if there are no clear links between the places and your fears. In fact, panic disorders are often associated with other problems like agoraphobia and situational avoidance.

You may scoff at the idea of simply breathing to get through a panic attack, but deep breathing does help many people relieve anxiety. Breathing deeply can help steady your heart rate. A panic attack may trigger fight-or-flight responses, which have physical and mental components. Breathing deeply and steadily may slow down your heart rate, which relaxes the physical response to panic. As your body calms down, your mind may slow down and relax as well. Focusing on breathing could be considered a form of mindfulness, which is intentionally focusing on the moment you’re in rather than your racing thoughts or worries. 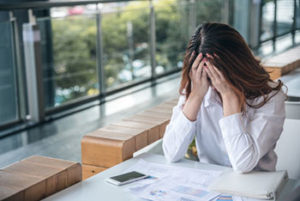 When a panic attack is happening, you may feel threatened or that your problems are overwhelming. For some people, it helps to stop and focus on your security at that very moment. Even just thinking through your immediate situation and repeating, “I’m not in danger. Right now, I’m OK.” Even if you’re facing significant problems, focusing on your safety and security on a moment to moment basis can help. For instance, you may feel overwhelmed at work, but at this very moment, you’re OK.

Catastrophizing is a common occurrence in anxiety attacks. It’s a line of thinking that quickly snowballs from a relatively small problem into a catastrophic one. For example, if your friend doesn’t respond to a text, you may feel like they don’t like you, then that may turn into the idea that all of your friends secretly don’t like you. In an instant, a missed text turns into the idea that you’ll one day have no friends at all. Catastrophizing is common, but in people with anxiety and panic disorders, it can lead to an attack. Recognizing that the problem you’re facing might be smaller than it feels can help put a frightening moment into perspective.

Some panic attacks are triggered by overwhelming stimulation like loud sounds, bright lights, or too many people trying to get your attention at once. Sometimes, preventing or dealing with a panic attack involves taking a break in a quiet and comfortable setting. In some cases, just closing your eyes can reduce the feeling that you’re being overwhelmed by stimulus.

Panic attacks often come from the fear that there’s something wrong with you medically. They may even cause alarming physical symptoms like chest pains or shortness of breath. If you’re worried about your physical health, a doctor will be able to investigate your concerns in a checkup. Learning about your health and ruling out serious problems like heart disease may help ease your anxieties about health. Keep in mind, going down internet rabbit holes related to your symptoms may only feed your anxiety. If you’re concerned, it’s better to let a professional run some tests.