How Long Does Lisinopril Stay in Your System? (Blood, Urine, & More)

Lisinopril is used in the treatment of hypertension or high blood pressure. It is known as an ACE inhibitor, an angiotensin-converting enzyme inhibitor, meaning that it inhibits the functioning of a substance in the body that causes blood vessels to constrict.

By relaxing the blood vessels, blood pressure is lowered, and there is more blood supply to the organs.

The medication is used by people with high blood pressure. It is often started within 24 hours after someone has experienced a heart attack to increase blood flow. It is typically taken in pill form.

How Long Does Lisinopril Remain In the Body?

Lisinopril is water-soluble and has a relatively poor level of bioavailability (the amount of the administered drug that actually goes into the bloodstream). Its peak effects occur about four to eight hours after taking it. Eating food does not affect its absorption level.

The half-life of lisinopril is about 12 hours in most people. People with kidney problems will retain more of the drug for a longer period.

The half-life represents the time it takes a normal person’s metabolism to reduce the concentration of a particular substance by half. In most cases, the complete elimination of a substance takes between four and six half-lives. Thus, for most people, the drug would fully be eliminated from the system within three to four days.

The Detectability of Lisinopril 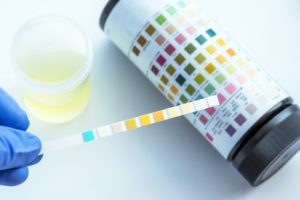 Given its half-life, lisinopril would be detectable in most cases for the following periods:

Several factors affect how long lisinopril would remain in the body and how long it would be detectable on a drug test.

Would Lisinopril Be Detected during Most Drug Screening Tests?

The majority of drug tests for employment purposes will not detect the presence of lisinopril. This includes standard 12-panel and 13-panel drug screens.

This is because lisinopril is not considered to be a significant drug of abuse. It is not typically abused, even in clinical populations.

Unless there is some reason that someone would be screening for every single substance used, such as during an autopsy, or some entity is looking specifically for lisinopril use, the drug will most likely not be screened for during drug testing.