Eli Lilly & Company created propoxyphene, better known as Darvocet, in 1957 as an opioid derivative with properties that were similar to codeine. It is said to be about 20 percent as powerful as morphine and was intended to treat mild-to-moderate pain.

The difference between Darvocet and morphine, though? It poses dangers even when used as prescribed, and this isn’t from an overdose. Though Darvocet was prescribed to millions of people through many decades, the U.S. Food and Drug Administration (FDA) finally stepped in to ban Darvocet to the delight of the medical community.

It only took 53 years of medical professionals pleading for and demanding the drug be removed, but Darvocet was finally banned in 2010. The FDA saw that, by this point, there was enough evidence to support the claims and took it off pharmacy shelves. Darvocet posed too many risks that outweighed any medicinal benefits if any, that it offered.

Some physicians openly shared that Darvocet is an opioid medication that offered only placebo benefits with opioid dangers. This was all part of the evidence that backed the claims for the drug’s removal.

Even in 2018, with Darvocet not available or prescribed by physicians, the drug is still sought out and can be found illegally on the black market. An FDA ban does not mean the drug is going to automatically disappear. If there is a will for anything, there will always be a way to obtain it. This is an unfortunate reality when it comes to dangerous drugs.

With Darvocet being much weaker than other opioids because of its low potency level, someone who uses the drug recreationally will be more inclined to take a higher dose. The problem with this? The user could be dead in as a little as an hour. Many of the deaths linked to Darvocet use involved people who have a history of emotional problems, thoughts of suicide, or attempted suicide. Some users took antidepressants, sedatives, or tranquilizers that are designed to make people sleepy.

Darvocet is a combination of the drugs propoxyphene and acetaminophen. These are the two active ingredients that make it Darvocet. The purpose of creating the substance was to treat mild-to-moderate pain.

While our bodies produce their own natural opioids, they are often not enough to treat chronic or acute pain that can occur from injury or surgery. Synthetic opioids bind to the natural receptors in our bodies and block these pain signs. The result? Pain relief. A side effect, however, is also euphoria from the drug.

Darvocet is used in conjunction with acetaminophen to increase the level of pain relief. It was meant to add to the strength because Darvocet is weaker than other opioids like hydrocodone. It has this inability to treat pain on its own, which is why it was brought to the market, so addiction specialists started using it as an alternative in treating patients during opioid addiction withdrawal.

While the drug has been completely banned by the FDA, it still does largely exist in the black market. There are street names for Darvocet that include:

The drug was prescribed to be taken orally, but those who abuse it will crush the pills into a powder and snort it for a more instant high. Because of how weak Darvocet is, users will continue to snort or consume the pill to get an effect, but this can be met by an overdose. As mentioned earlier, overdoses on this drug can be fatal immediately. 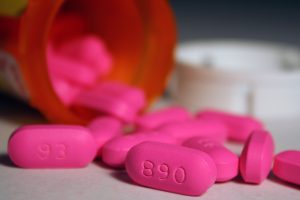 If you are attempting to identify Darvocet, it is an oval-shaped pill with “DARVOCET-N 100” printed on it. There are other versions with the same color and shape, but it has “DARVOCET-N 50” printed onto it. The number on the pill indicates the dosage you are taking. Darvon, which is another version of Darvocet, is a capsule-shaped pink pill that has a similar stamp to identify the strength. The Darvocet 100 pills contain 100 milligrams of propoxyphene and 650 milligrams of acetaminophen. Darvocet 50 contains 50 milligram of propoxyphene and 325 milligrams of acetaminophen.

While most pain relievers come in a pill form, the color of Darvocet allows for the drug to stand out from others. Very few prescription medications have the same orange appearance that Darvocet has, and it allows for individuals to identify the banned drug quickly.

When Darvocet was prescribed, the dosage varied person by person based on their history of substance use, level of pain, and if they were taking other prescription drugs for pain relief. The average dosage of Darvocet was one or two tablets every four hours, which was dependent on the strength of the pill.

Consuming large amounts of a drug will increase the frequency someone uses the drug, which can cause an addiction to form. Darvocet interacts with opioid receptors and releases chemicals to reduce pain. The body will eventually become reliant as well as tolerant over time. It will lead to someone using larger doses to achieve the same effects.

What Are the Signs of Darvocet Addiction?

If you are equipped with the right knowledge, you can spot an addiction to Darvocet. It is often noted that it can be difficult to spot in the earlier stages. This is true, but with the right information and suspicions, one can decipher when someone’s using Darvocet.

With that said, there can still be no outward symptoms to notice at first. Over time, though, use of the drug will become more evident to those who may suspect it. Unfortunately, when signs begin to appear, it may be too late with regards to saving someone from developing an addiction. Once an addiction has been established, the signs to look for include:

There also are physical symptoms that can be shown by someone abusing Darvocet. At this point, the decision to obtain the drug will be the driving force behind their decisions. These signs are:

What Is Involved In Darvocet Addiction Treatment?

Addiction treatment for drug use can be what ultimately saves their lives. Someone who is stuck in the cycle of addiction to a drug like Darvocet could suffer major health problems as a result of using it. Addiction may seem like a cycle that never ends, but options are available to someone who’s ready to get help. When it is accepted there is actually a problem, the next step will be to seek out a treatment center. Once this decision has been made, there will be support along the way.

The first step in opioid recovery is medical detoxification. During this process, a client will be admitted for up to seven days (or longer in some cases) under the supervision of 24-hour care. This is best suited for someone who has pre-existing medical conditions that need attention.

During this time, the client will be weaned off the drug safely and transition back into physical and emotional stability. The medical staff will be available in case of any emergency that could take place. They could offer medication to the recovering user to help alleviate the symptoms as well.

During detox, the addiction team will assess the client and determine the next step. If the team determines the client to be at high risk, they will be placed the person into residential treatment. This is a process that will last anywhere from 30 days to 90 days, and the client will live on-site with 24-hour care. Therapies that the client may receive include:

Clients with no history of relapse and are in the early or mild stages of addiction may be placed into an outpatient treatment program. This means they will attend the same therapy sessions as residential, but they will have the ability to go home after the sessions conclude. This is the best option for those that cannot get out of work or school.

How Dangerous Is Darvocet?

There is a reason Darvocet was banned in 2010, and that is because the medication can cause serious health issues. When it comes to drugs, an overdose is often the first problem that comes to mind, but it’s actually worse than that when Darvocet is involved. Studies have linked heart problems, such as arrhythmia, to Darvocet use. With physical symptoms like overdose and heart problems aside, some studies also prove a correlation between exaggerated thoughts of suicide in those already prone to depression who use the drug. This is a major reason it was pulled off the market.